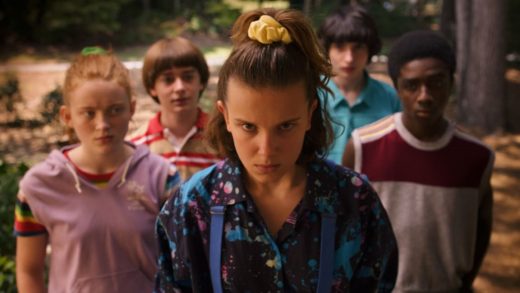 Although Stranger Things is set squarely in the mid-’80s, the show has been such a monster hit that it’s easy to imagine Netflix trying to keep its young cast fighting cruciferous hobgoblins well into the 2000s.

The series, whose third season drops on July 4, has had the kind of disruptive cultural impact any network would kill for and any brand manager would sell his or her soul to place their product in. Stranger Things flew in under the radar in the summer of 2016 as a spooky Winona Ryder vehicle and quickly became the (purported) most-watched streaming show of all time, vaulting several cast members to instant fame, and in Millie Bobby Brown’s case, an Emmy nomination. And now that the world has had two years to digest the second season, expectations are sky-high for the show’s return.

Well, except perhaps among those who haven’t seen it yet.

Since the baseline of quality for the average series is now maybe a 6.5, and there are more shows than any one person could ever get through in two lifetimes, sometimes even the most popular shows can fall through the cracks. Anyone who hasn’t seen Stranger Things yet must be at least a little curious about how it stacks up against the hype. Just what about this show makes Twitter timelines light up with memes and screams?

Well, it’s a few things. Awash in winking period references—from Evil Dead posters to the John Carpenter–style score and even guest actors like Matthew Modine, Paul Reiser, and season 3 addition Cary Elwes—the show seems to scratch the Amblin-era itch for kids on bikes solving supernatural mysteries with life-or-death stakes. It’s got multigenerational appeal, it moves at a fast clip, and its much-discussed nostalgia never overshadows the sharp storytelling. In other words, perfect viewing for a holiday weekend.

If you don’t have time to mainline the first two seasons before somebody suggests taking a break from the pool to dive into season 3, all you have to do to catch up is keep reading.

What the hell is the Upside-Down?

Stranger Things’ most significant contribution to pop culture nomenclature, the Upside-Down is essentially a photo-negative version of our reality from another dimension. It’s filled with plant-monsters and smoke-tentacles, and you would absolutely hate it there. The discovery of the Upside-Down is the inciting incident for the whole series. To back up a bit, Stranger Things is set in Hawkins, Indiana, where, in the winter of 1983, scientists at the Hawkins National Laboratory attempted to open a portal to another dimension. Although that sounds like a great plan with zero downside, these scientists’ experiments accidentally led to the opening of the Gate that allows elements of the Upside-Down to seep into our world. Notable side effects from this seepage include the Demogorgon, season 1’s cabbage-headed monster-villain, whose name comes from our lead characters’ love of Dungeons and Dragons ephemera, and the Mind Flayer, the aforementioned smoke-tentacle being that links together various beasties and killer vines in the Upside-Down and functions as a hive mind. (Got all that?)

The Gate to the Upside-Down would never have been opened, however, without the most important character of the show.

Who the hell is Eleven?

It turns out that the scientists at the Hawkins lab were up to nefarious deeds even beyond the whole interdimensional portal-meddling thing. In season 2, it’s revealed that the Hawkins lab is a former site of the (factual) MK Ultra mind control experiments. Since dousing participants’ brains with LSD isn’t evil enough, the scientists also sometimes stole babies from pregnant subjects under the lie that they’d miscarried. These babies turned out to be either blessed or cursed, depending on your view, with telekinetic and telepathic mind powers. (Probably cursed, since having such powers means being the subject of lab experimentation throughout childhood.) One of these stolen babies, presumably the eleventh one, makes contact with a Demogorgon just as the scientists are knocking on the Upside-Down’s door, and she unintentionally opens the Gate. Thankfully, once Eleven escapes from the lab, she starts to figure out how to control her mind powers.

What’s everybody else’s deal on this show?

Will Byers: One of the members of the D&D–loving core group of middle schoolers at this show’s center, Will (Noah Schnapp) has not had an easy go of it during the events of this series. In season 1, the Demogorgon brings him into the Upside-Down, where he hides until he is eventually saved; then, in season 2, it turns out that the Mind Flayer still has its hooks in him. It’s not much of a spoiler to say that Will’s problems in season 3 are of a kind more typical to adolescent boys than Demogorgons.
Joyce Byers: Will’s long-suffering mother, Joyce (Winona Ryder), has always taken an active role in rescuing her son, including coming up with an ingenious, Christmas-lights-involved method of communicating with him in the Upside-Down in the first season. In season 2, her boyfriend, Bob Newby (Sean Astin), dies heroically while helping to save the day. Joyce starts out the third season still quietly mourning this loss.
Jim Hopper: Hawkins’ chief of police, Hop (David Harbour), has a tragic backstory involving the loss of his young daughter and subsequent alcoholism, which primes him for wanting to help Eleven when their paths eventually cross.
Mike, Dustin, and Lucas: The other three members of the core group at the show’s center, Mike, Dustin, and Lucas (Finn Wolfhard, Gaten Matarazzo, Caleb McLaughlin) are brave and loyal friends who have stuck their necks out multiple times to save Will (and the entire town of Hawkins too).
Nancy, Jonathan, and Steve: These three spent the first two seasons in a tumultuous love triangle. Nancy (Natalia Dyer) is Mike’s sister, and Jonathan (Charlie Heaton) is Will’s brother. Steve (Joe Keery) starts off the series as a rich, preppy jerk, but has a redemptive enough arc to end the first season as Nancy’s boyfriend, much to Jonathan’s chagrin.
Max: Max (Sadie Sink), or MADMAX as her videogame high score name would have it, is a California transplant at the beginning of season 2, who quickly becomes absorbed into the core group of friends and a love interest for both Dustin and Lucas.
Billy: Max’s ridiculously good-looking, dickhead stepbrother (Dacre Montgomery), who became a chaotic addition to the social fabric of Hawkins.

Scott Clarke (Randy Haven), a science teacher at Hawkins Middle who unwittingly helped the core group of friends navigate the Upside-Down by answering their pointed questions.
Erica (Priah Ferguson), Lucas ‘s little sister, who is just beginning to play a minor role in the core group’s adventures.
Murray Bauman (Brett Gelman), an investigative journalist who helped Nancy and Jonathan investigate the evil doings at the Hawkins lab in season 2.
Kali/Eight (Linnea Berthelsen), a fellow alumnus of the Hawkins lab, helped Eleven hone her powers (in one of season two’s least-loved episodes).
Dr. Owens (Paul Reiser), a scientist at the Hawkins lab who replaced the villainous Dr. Brenner (Matthew Modine), who was killed at the end of season 1. At first, it seemed that Dr. Owens would continue down the same path in season 2, but he ended up doing an about-face.

Who is in a relationship with whom, and who is not?

Mike and Eleven capped off their long-standing flirtation and had their first kiss at the Snow Ball dance at the end of season two.
Lucas and Max are officially a couple.
Jonathan and Nancy ended season two as an item. (Sorry, Steve!)
Steve and Dustin are not a couple, exactly, but they’re certainly a pair.
Hopper and Joyce have a mild flirtation that is mostly one-sided, even if Joyce weren’t still mourning Bob Newby.
Billy and Karen Wheeler (Mike and Nancy’s mom) have had a not-so-mild flirtation that may be explored (or not) in season 3.

Where did we last leave everything?

Eleven used her mind powers to close the Gate.
The Hawkins lab got shut down.
Dr. Owens procured documentation to give Eleven an identity (Jane), although everyone still calls her El.
Will seems to be free from the Mind Flayer once and for all.
At the very end of season 2, we see that in the Upside-Down, the Mind Flayer is looming over the kids’ school. 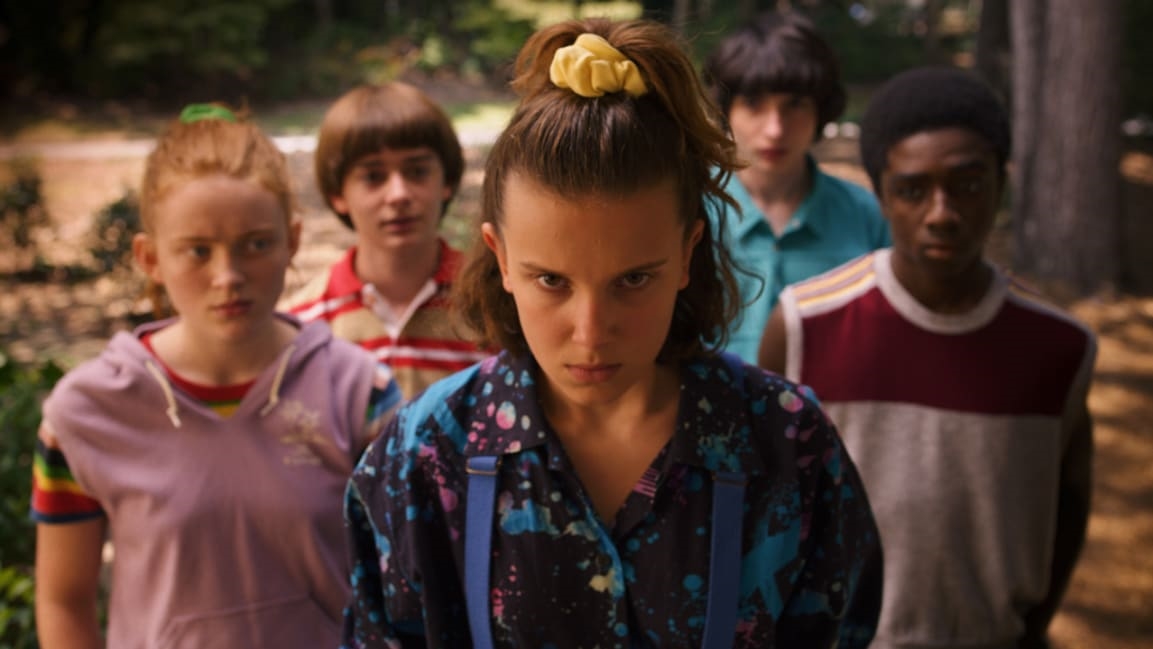