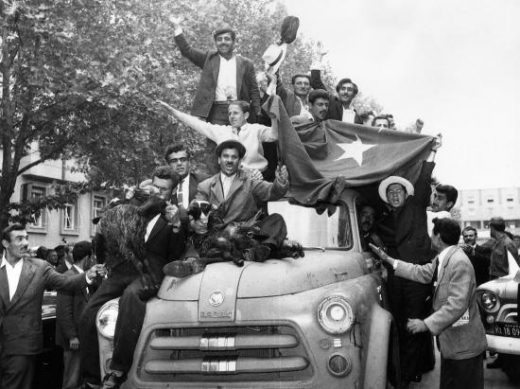 As Turkey was roiled on Friday by an attempt by the military to seize control of the nation in a coup, some of its older citizens may have a sense of déjà vu.

Though Turkey has had a long and illustrious history as a regional power—the Ottoman Empire, ruled from Istanbul, was long a major power—the Republic of Turkey itself is a relatively young nation, founded less than a century ago. And yet it has seen more than its fair share of coups.

That high rate of turmoil isn’t exactly an accident. In fact, one of the reasons behind the string of coups has to do with something baked into the Turkish system of government. As TIME explained after one of those coups, the nation’s constitution leaves the military with the authority to “step in” when needed; military leaders are not beholden to political leaders.

As the magazine put it in 1960, after autocratic premier Adnan Menderes was deposed in a largely bloodless military coup: “The Turkish army has long scrupulously observed the admonition of the late great Kemal Ataturk that the army should stay out of partisan politics. But it also remembered that Ataturk charged it with guarding the constitution.”

In that 1960 coup, General Cemal Gursel was named President, Premier and Defense Minister, leaving the world with hopes that the nation was on its way back to true democracy. (Menderes was hanged.)

It would only be eleven years, however, before a group of military leaders handed a radio newscaster a memorandum to read out loud, telling the people of Turkey that the government had once again “pushed our country into anarchy, fratricide and social and economic unrest” and thus “the Turkish armed forces, fulfilling their legal duty to protect the republic, will take power.” That technique, used successfully, came to be known as “coup by memorandum.”

Get your history fix in one place: sign up for the weekly TIME History newsletter

After a long stretch of political infighting—without a working parliamentary coalition, no laws had been passed for months—and a series of unprevented terrorist attacks, the military “took matters into its own hands,” as TIME put it in a story tellingly headlined “The Generals Take Over Again.”

The democratically-elected government was ejected by a council of six generals, who moved during the night to detain the nation’s opposition leaders, announcing that they would control everything until it was possible for a working government to resume. The history from 1960 and 1971 suggested they would do just that: each coup put civilians back in charge within a few years. So it was no surprise when the reaction around the country was one of, as TIME put it, uneasy relief:

After months of rising terrorism by both the extreme left and extreme right, the country allowed itself to settle into a state of unaccustomed relaxation. Civilians waved at tanks rumbling through the streets of Istanbul. Automobile drivers shook hands with soldiers who manned the roadblocks. Storekeepers raised their bomb-proof shutters for the first time in months, and restaurants began to fill up again in the evenings. Some city dwellers looked far trimmer than usual, simply because they no longer packed pistols inside their coats or waistbands. Ankara’s English-language Turkish Daily News, reflecting the prevailing mood, announced in a banner headline: LIFE BACK TO NORMAL THROUGHOUT TURKEY.

Well, almost. Incidents of renewed terrorism marred the junta’s uneasy post-coup honeymoon. Vowing opposition to the military regime, leftist guerrillas ambushed and killed a tank captain in Adana and a senior police officer in Istanbul. A left-wing extremist was killed in Istanbul when friends tried to free him from police custody. In the meantime, the military’s roundup of suspected extremists continued, with more than 2,000 under arrest by the end of the week, and the offices of some 150 labor unions were closed down. The junta also ordered citizens to remove all political slogans from their walls. Said a martial law communique: “Everyone is responsible for his own wall. If you cannot afford new paint, you should call the martial law authorities in your neighborhood and they will provide it.”

Before three years was up, the military regime made good on the promise of a return to democracy in late 1982—but it was an arrangement that left many observers wary, as the new democratic government left the president with immense authority.

At the time, Turkey’s role in the world was a fragile and important one: as a neighbor of post-revolutionary Iran, its fellow NATO members valued the access it could provide. On a world scale, the stakes in its quest to find military and constitutional balance were seen by many as higher than ever.

In practice, however, democracy was often easier said than done. The years that followed were not free of further attempts by the military, citizens and government to sort out, with varying levels of success and varying levels of violence, who best upheld the constitution. That disconnect evidently continues to this day.

Before the 1980 coup by Turkish General Kenan Evren summed up the situation thus: “Everyone speaks of national unity, but unfortunately, everyone fails to bring it about.” 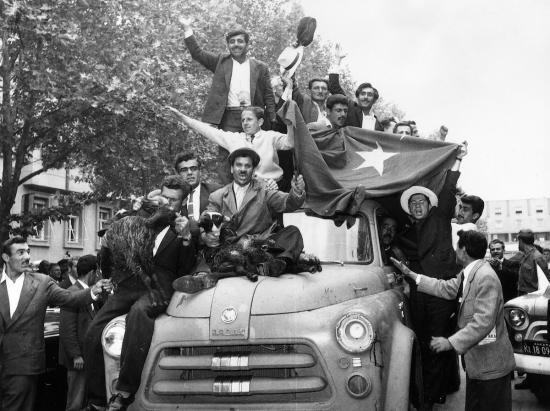