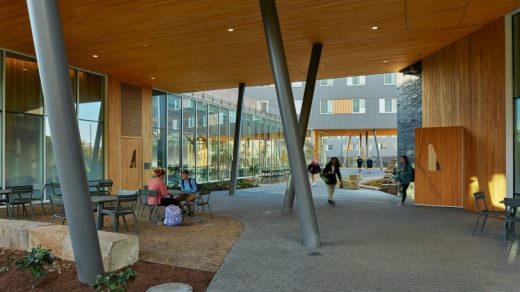 America’s largest timber building is complete, and it may be the future of construction

In 2017, Leers Weinzapfel Associates constructed a building completely out of timber at the University of Massachusetts Amherst. Lauded for its energy-saving radiant flooring and storm water roof runoffs that redirect water back to the Connecticut River, the John W. Olver Design Building not only won the architecture firm several awards, but would inspire a string of sustainable and wood-based buildings.

Now the firm, in collaboration with Modus Studio, Mackey Mitchell Architects, and OLIN, has finished its second mass timber building: Adohi Hall at the University of Arkansas. This grand piece of timber architecture is now officially the largest mass timber building in the country, and it paves the way for other architects to adopt this new—and yet old—material.

What is mass timber? It’s an engineered wood product that is arguably more sustainable than nonrenewable steel. Mass timber buildings aren’t just made out of common wood, though. They’re usually built with “cross-laminated timber,” or CLT, which are large pieces of timber glued together in layers that make them surprisingly strong, durable, and, crucially, resistant to fire. Building with the material can also sequester the carbon that might be emitted from manufacturing and shipping steel, though the sustainability benefits of mass timber are still being debated.

While CLT has taken off outside of the U.S., it is still relatively uncommon in America—though that’s beginning to change: SOM and other firms are developing research that could help change building codes that currently impede architects who want to use mass timber.

That includes Leers Weinzapfel Associates, which is a major proponent of mass timber. In Arkansas, the firm’s $79 million, 202,027-square-foot residence hall holds 708 beds across four distinct floors; the communal spaces, like large study rooms, are marked by light-filled windows and exposed wood ceilings and columns. Rustic and cabin-like, the university dorm and living space is wrapped with copper-colored panels—a nod to the building’s modernity and simultaneous focus on natural materials.

The living and learning hall sits on four acres at the base of a large hill, and is surrounded by long stretches of forest, along with other dormitories that have existed on the campus since the 1960s. OLIN’s landscape architects integrated the nature surrounding the new building with outdoor spaces that cascade down the slope. They create outdoor meeting spaces in the form of courtyards and semi-sheltered passageways, which sit near interior amenities like recording studios and a community kitchen.

“In all our work, we look for the synergy between place, purpose, and means. These came together in an extraordinary way at Adohi Hall,” Andrea P. Leers, FAIA, principal, Leers Weinzapfel Associates, said in a statement. “We drew inspiration from the regional context of the Ozarks, creating a living/learning environment powerful enough to be a destination remote from the center of campus, and the wood-based construction system we developed forges a bond between setting, human comfort, and sustainability.”

The building gets its name, Adohi, from the Cherokee word for “woods;” the university and architects also selected this name to honor this Indigenous Arkansas community and the lives lost nearby along the Trail of Tears in the mid-19th century. 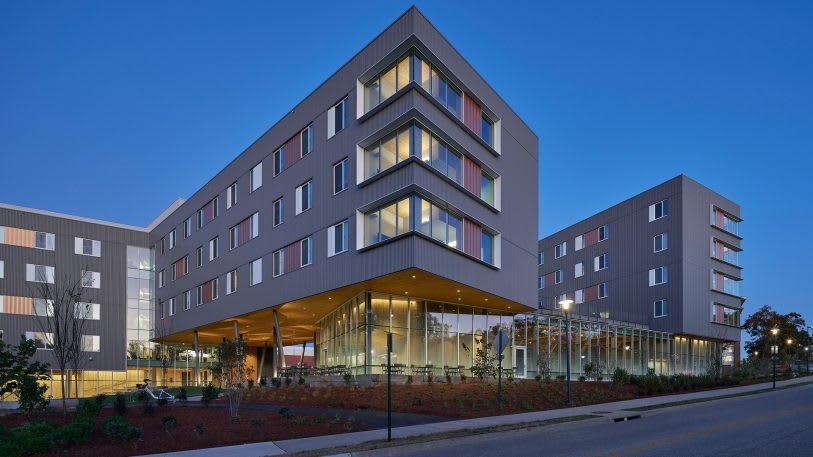 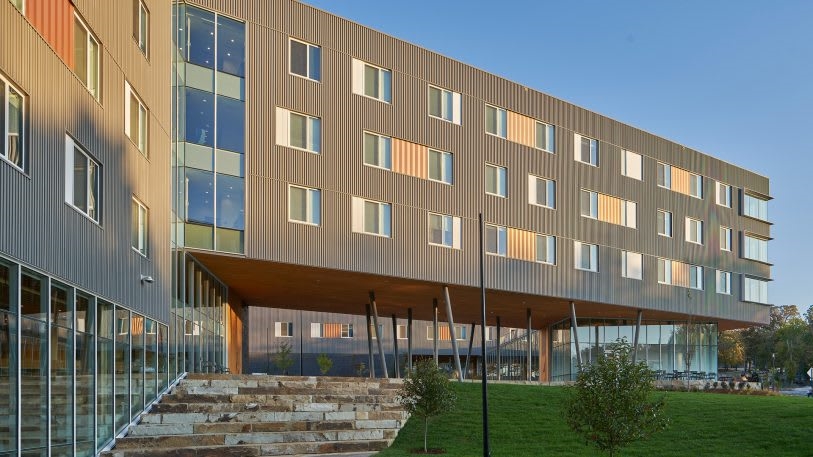 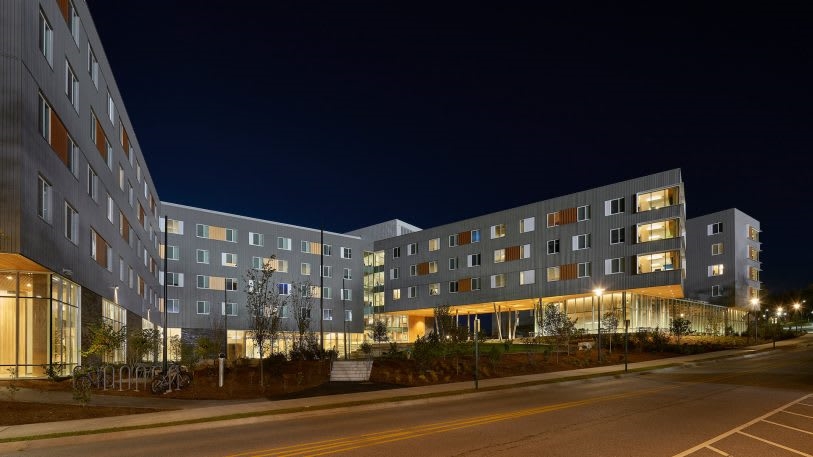 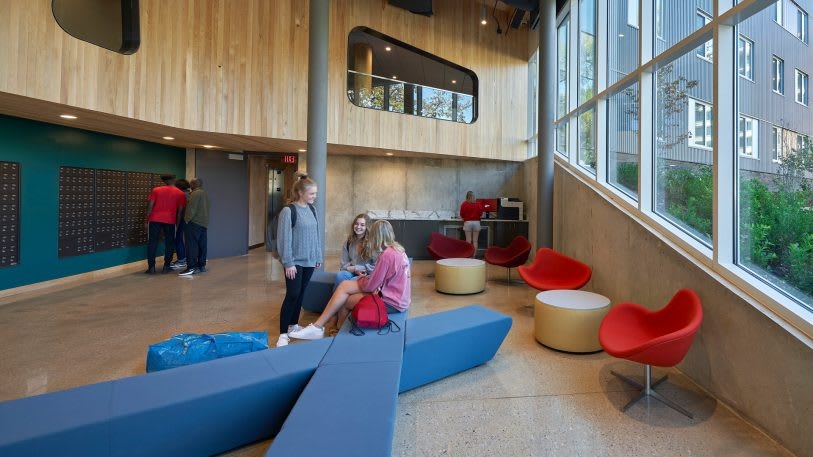 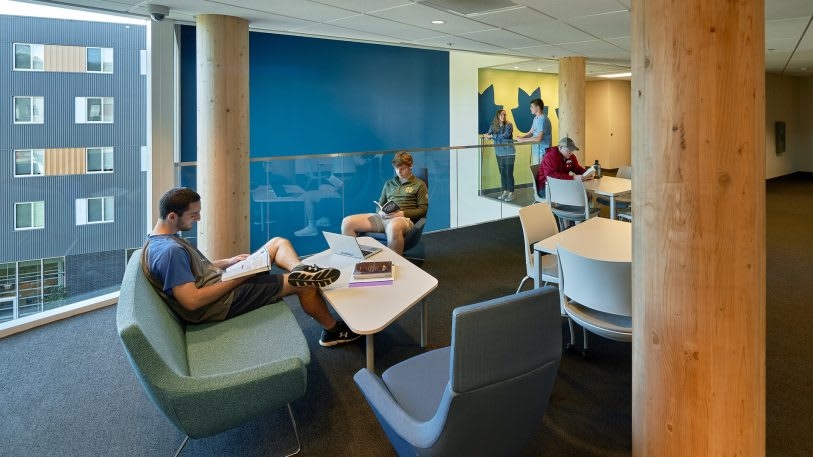 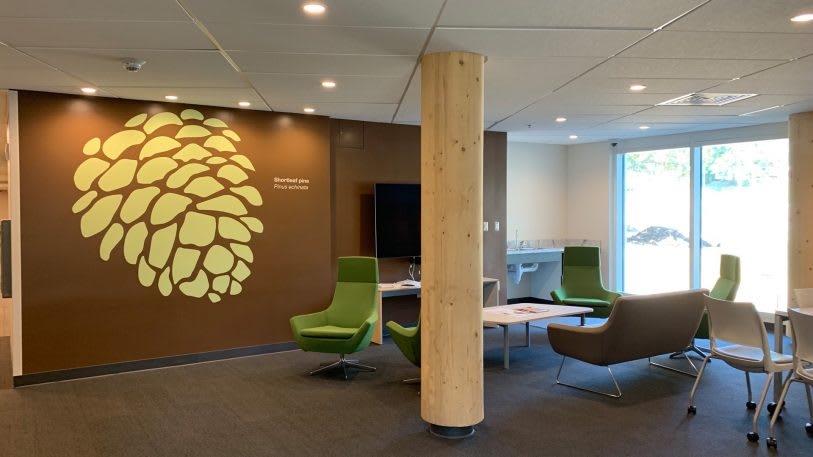 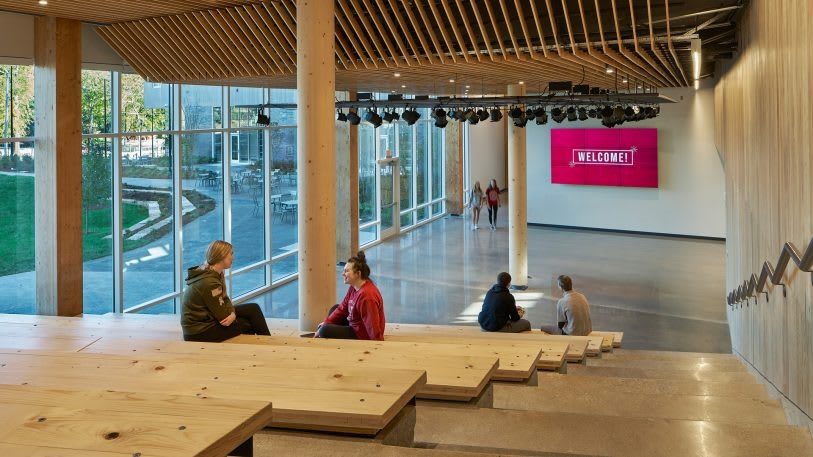 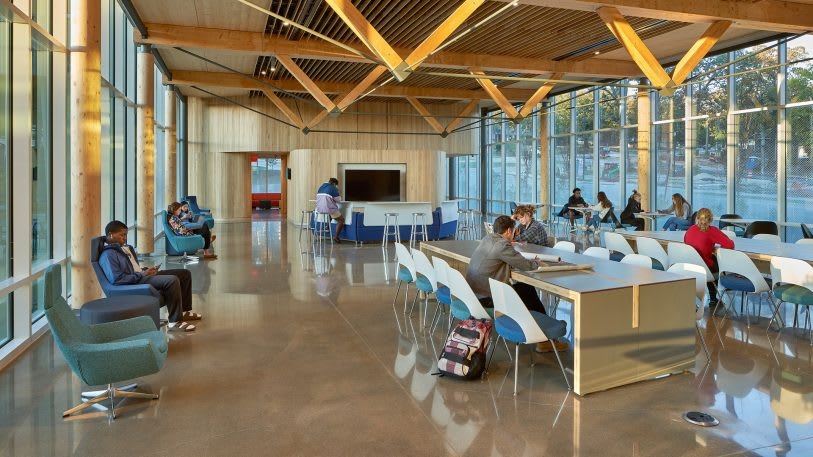 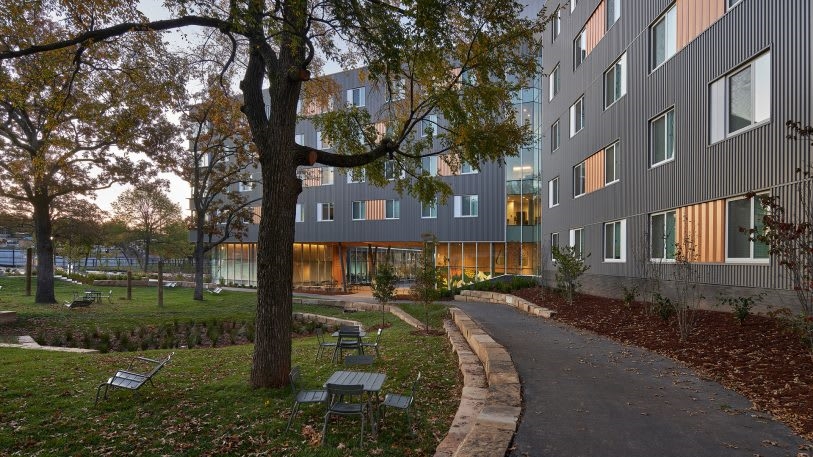 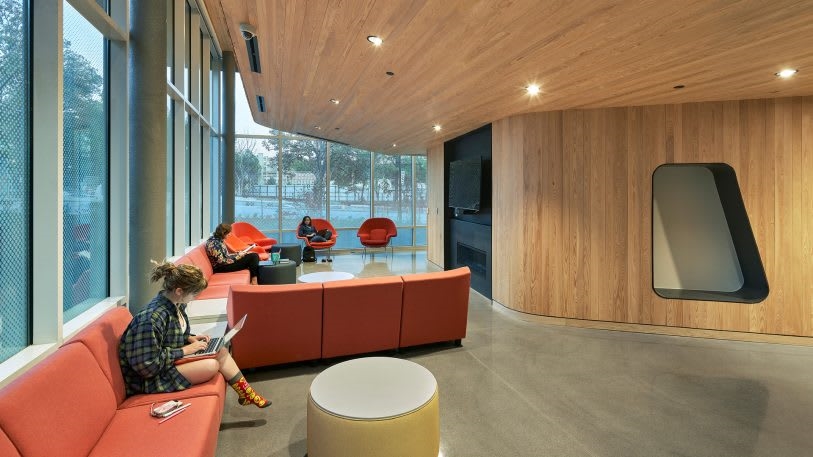 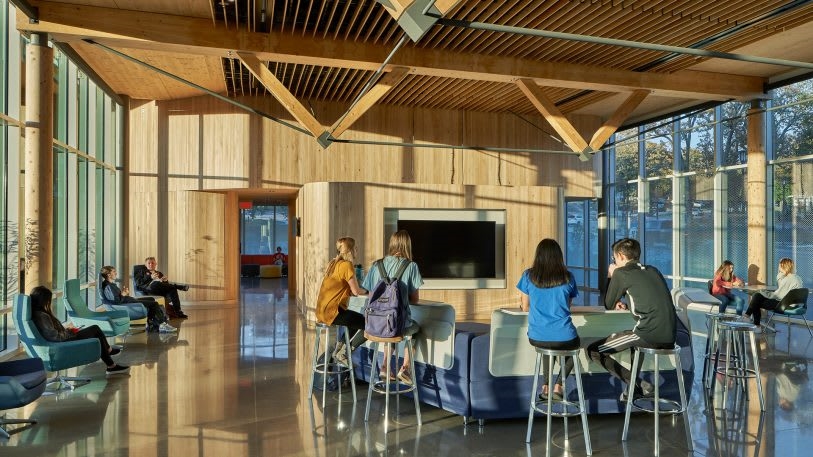 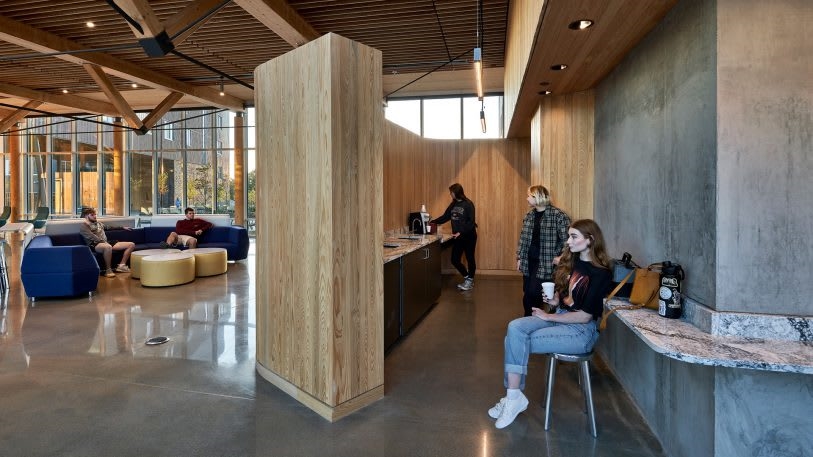 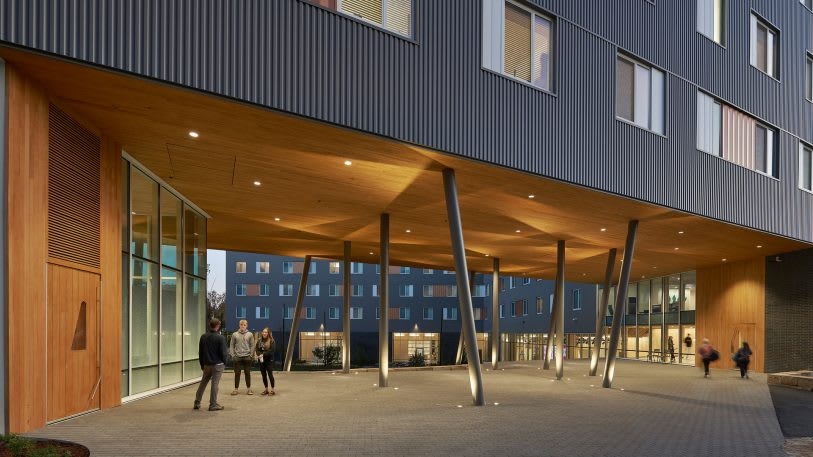 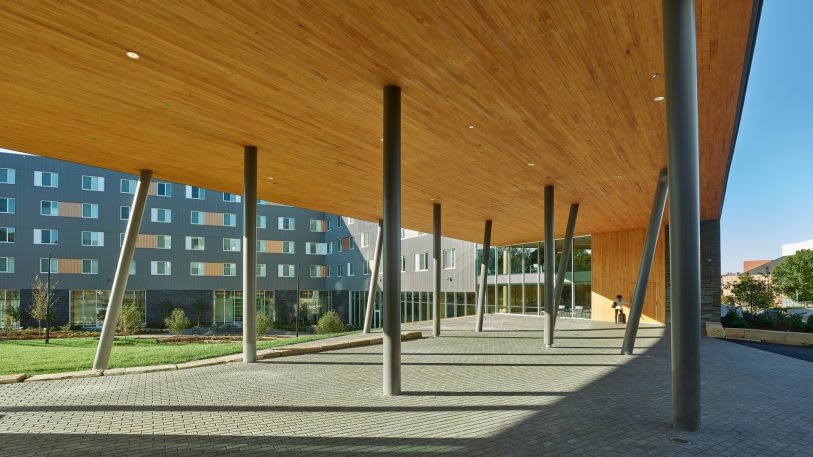 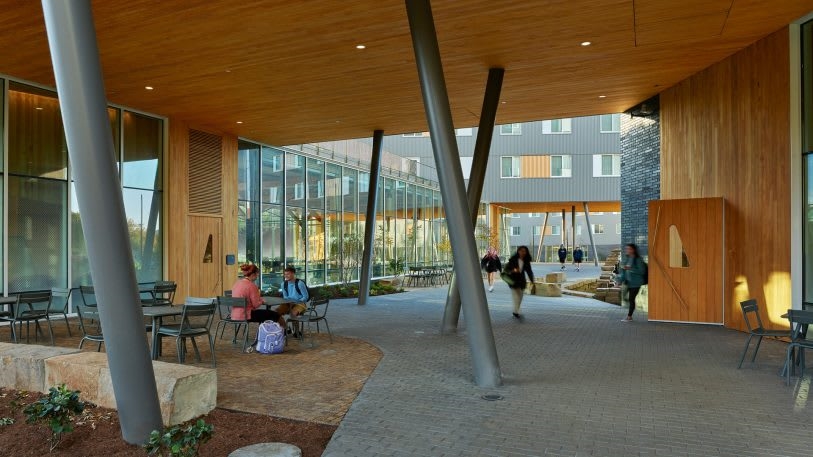