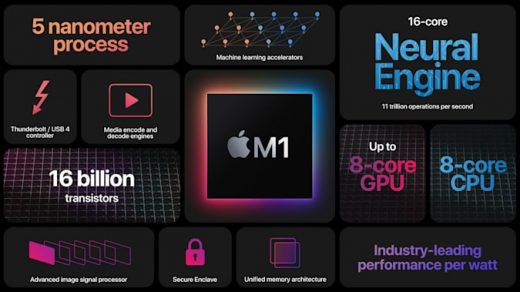 M1 is the first Apple Silicon chip for the Mac

It features more than 16 billion transistors.

After years of anticipation and a tease at WWDC 2020, Apple’s first ARM-based Mac processor is here. The 5nm M1 system-on-a-chip (SoC) features an 8-core CPU, which the company claims delivers the best performance-per-watt of any processor on the market, and up to 8 GPU cores. Those CPUs cores are divided up into four high-performance and four efficiency cores. According to Apple, the former deliver industry-leading performance in single-threaded workloads, while all four performance cores can work together for a boost in multi-threaded performance.

To put that design in context, the company’s current A14 SoC features a six-core design with only two high-performance cores at its disposal. But much like the A14, M1 includes a 16-core Neural Engine that can complete 11 trillion operations per second.

The company says M1 can deliver up to two times the performance of a traditional PC chip within the thermal envelope of a MacBook Air. When it comes to graphics, Apple claims M1 delivers the best performance of any integrated GPU on the market. There’s also built-in support for Thunderbolt 4, PCI Express Gen 4 and NVMe storage. In addition, the chip features a universal memory architecture, dedicated engines for encoding and decoding media, as well as a secure enclave to keep your information safe.

In practice, M1 should deliver significant performance and energy efficiency gains. With the new MacBook Air, for instance, Apple says M1 enables the laptop to offer up to 15 hours of wireless web surfing and 18 hours of video playback on a single charge. By contrast, the current Intel-powered model promises up to 11 and 12 hours in those use cases. Another feature the new silicon brings to Apple’s laptops is that they can instantly wake from sleep mode.

According to the company, it has optimized all of its first-party apps to take advantage of M1, with major performance improvements across the board. For instance, Final Cut works six times faster on M1 than on previous x86 processors. Moreover, iOS and iPadOS apps run natively on the new silicon. Developers like Adobe will update their apps to take advantage of M1 later this year. In the meantime, Apple’s new Macs will ship with Rosetta 2, which will translate existing x86-based apps so that they can run on M1 Macs.

In the near term, we’ll see M1 make its way into new MacBook Air, MacBook Pro and Mac mini models. As it did at WWDC 2020, Apple said fully transitioning its Mac lineup to its in-house silicon will take the better part of two years.

Catch up on all the latest news from Apple’s November event! 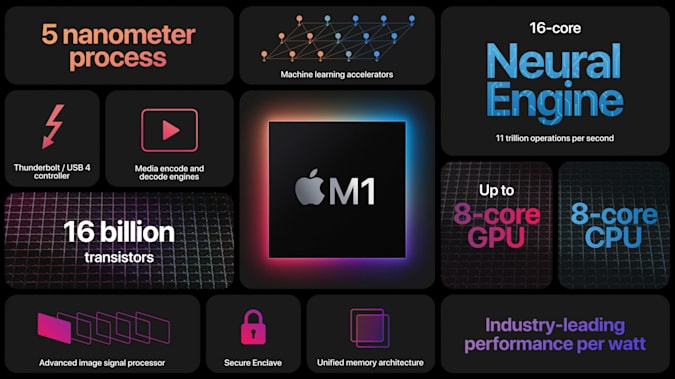