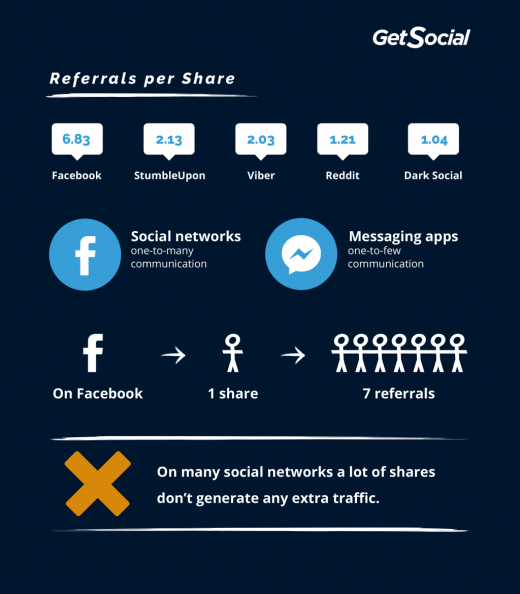 Debunking the Myths of Dark Social 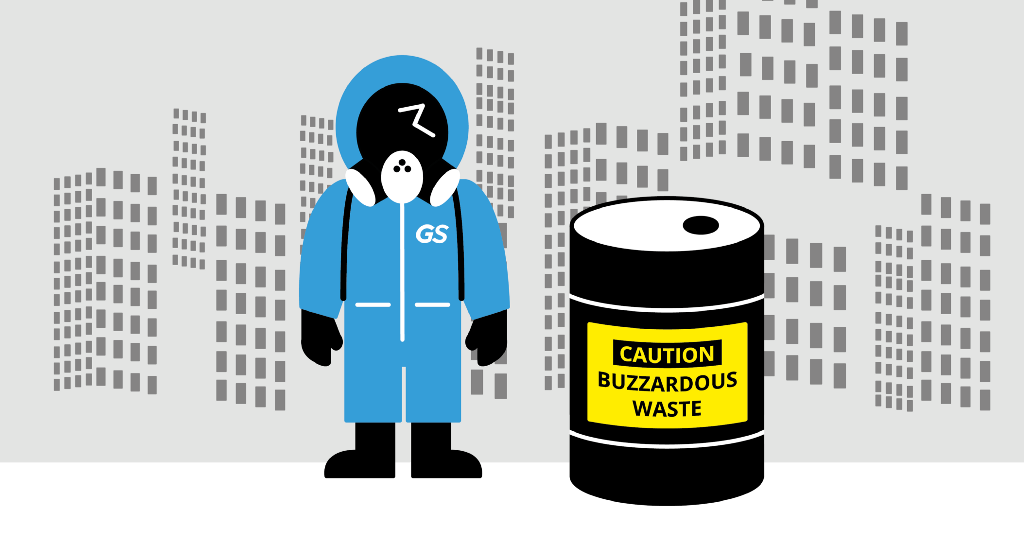 Buzz + Hazardous… You get it.

Like all Marketing related stuff, when a concept starts to become a buzzword, you see a lot of people trying to jump on the bandwagon.

I’ve seen a recent flood of posts being written lately about Dark Social and, unfortunately, there is some confusion about what Dark Social is as a concept. I want to contribute with some insights.

After all, the 1000+ hours I spent researching the topic should be enough to know what Dark Social is NOT, right?

#1 – Customer Support is not Dark Social

A good guide about how to track Dark Social in Google Analytics on Social Media Examiner. It’s all fine and proper until it starts giving examples on how to tie Dark Social and Social Media Marketing, such as making ads that send users into Facebook Messenger for a chat.

The brand is interacting with the potential client on a private channel (Facebook Messenger), but this is simply good old customer support… happening on a messaging app.

If I want to be generous, because the visitors land on a chat app, I can call it Landing Page Optimization, since it provides a great way to engage with them straight away.

But if you know where the visitor comes from (an ad, in this case), what they clicked on and even what they want, what is so “dark” about it? You can measure everything from the start!

#2 – Shares are not Traffic, Ratios are not affected by Volume, et al.

A recap of what is Dark Social and its impact, on Talkwalker’s blog. Unfortunately, there are a couple misconceptions.

“(…) they got to this graph, which says more than 50% of their social shares happens via Dark Social.

Actually, the original Dark Social test made by Alexis Madrigal in The Atlantic did not measure shares, just social traffic or visits. At the time there was no technology to track dark social shares. But there is now…

That was in 2012 when messengers were less popular. But still, keep in mind that not all brands are the Atlantic, and news outlets tend to receive a lot more shares than, say, a B2B marketer.”

This is a confusion between ratios and quantities. Even if you have only 10 shares, it won’t matter: if 5 of those are made on private channels, 50% of your shares are dark social, which means its relative importance is the same for you and for The Atlantic, despite them having a thousand times more shares.

What could be said instead is that social traffic is much more important for big brands or publishers than to B2B marketers.

“I go by “never trust a stat you haven’t faked yourself”, so we did our own little bit of research.

If we look at our “Direct” traffic in Google Analytics and exclude traffic to the homepage, landing page and app, we see that 21% of our traffic comes from Dark Social sources.

Now, you see that this is way lower than the 80% Dark Social traffic advertised by RadiumOne”.

I highlighted the word “sharing”. Source

For starters, there is a mix up in the concepts of Shares and Traffic:

RadiumOne’s data is consistent with our own research, which shows that dark social shares stand above 65% of the total, but are currently only driving 32% of social traffic (note: these numbers vary wildly depending on the website’s country of origin and category).

This is also consistent with Talkwalker data, which says 21% of traffic comes from dark social sources. The gap is not large at all.

Why the difference between the % of shares and traffic?

Well, Facebook is still the king of social traffic.

This is so because, in average, dark social shares bring less traffic per share than “public social” shares.

The image below explains this behavior: 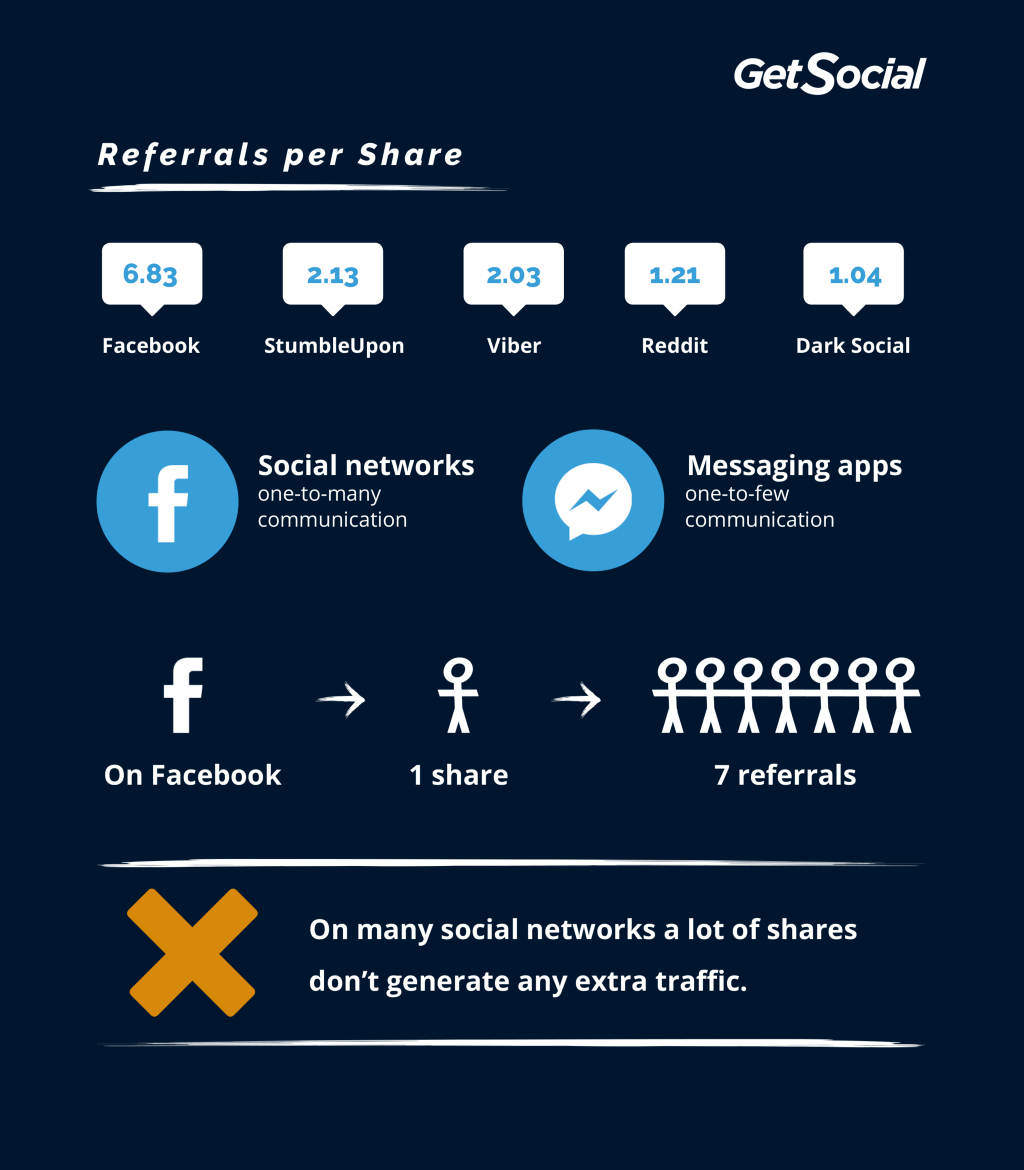 Source: The State of Social Sharing

#3 – Dark Social is not a synonym of Private Channels

This article actually has a very good quote about understanding what is and what isn’t dark social, even if it mixes things a bit: “Adidas has previously said that Snapchat has better retention than Youtube, but Alt (Florian Alt, senior director of global brand communications at Adidas) believes Snapchat is “a dark social platform of sorts”, because “you can’t really understand the metrics behind it so it is hard to measure and compare”. This versus something like Youtube “which is very openly sharing where we can understand the stats”.

I believe that distinguishing the concepts of private channels and dark social as two different things is important. Otherwise, the next thing you’ll see is brands saying that they are tackling dark social by using chat bots, which doesn’t make any sense.

On an older article, it was said: “WhatsApp was specifically chosen as our research shows that consumers already use the app to create their own micro-communities,” he continued. “Adidas wants to be the most personal brand, so we need to know and understand our consumer in order to have a meaningful relationship…. There is huge potential in dark social.”

In this case, they are mixing community-building with what Dark Social truly is: the bad attribution of traffic. There is indeed a lot of traffic data coming from WhatsApp that is Dark Social, mainly because, like Snapchat, WhatsApp is a private channel.

However, it’s not specified if these groups generate any traffic to external websites or if there is content being shared. If that’s not the case, this initiative’s relationship with Dark Social is tenuous at best… it’s just another form of Direct Marketing.

Bitly’s take on the matter: Using UTM parameters and shortened links, you can shine a light on your dark traffic.

You can use Bitly to track clicks that would otherwise become dark traffic.

“I include this link (http://bit.ly/bdpimagelab) every time I email clients with their photos. It’s a video explaining how to access your photos” Brady says.

In this case, the sender knows exactly where the recipient is going to open the link: in their email. In this case, it should use a UTM code such as “utm_medium=email”.

However, if the recipient then copies and pastes the link into another medium (WhatsApp, Messenger, SMS, etc.) for sharing purposes, the resulting clicks will all count as having Email as the source, messing up the attribution again.

João Romão wrote an entire blog post about the inefficiency of UTM codes that explains this problem nicely.

If you want to know a bit more about how Dark Social is becoming a very large issue for Social Marketing, just check our latest presentation:

Thanks for reading! I’d really appreciate it if you recommend this post (by clicking the ? button) so other people can find it.

If you have any questions, just leave a comment or send an email to support@getsocial.io and we’ll help 😉

João is the CEO at Getsocial.io, a social media tool that helps websites track their social sharing activities. By knowing who’s sharing their content they’re able to understand which users, items or social networks are driving more traffic and conversions to their websites.… View full profile › 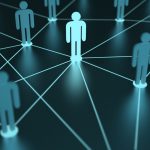 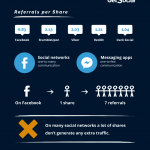