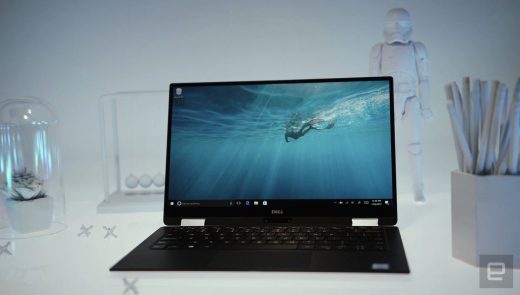 It was only a matter of time until Dell gave us a convertible spin on the XPS 13, our favorite Windows laptop for nearly two years running. While the original model is still ideal if you need a traditional laptop design, it falls short if you ever want more than just a clamshell. Enter the XPS 13 2-in-1, which has the same style and premium quality as its sibling, but with the added ability to transform into a tablet (and a few other things in between). It doesn’t revolutionize the world of convertible laptops, but it makes Dell’s high-end laptop lineup that much stronger.

Del’s XPS 13 2-in-1 doesn’t deliver many surprises, but it’s a faithful rendition of the company’s beloved premium laptop with convertible features.

It’s easy to mistake this new machine for the original XPS 13. They share the same overarching design: sleek metal cases, nearly bezel-less screens and an attractive carbon-fiber weave covering the keyboard deck and trackpad. While it would have been nice to see some dramatic changes, it’s nonetheless a handsome, premium-looking laptop. The XPS 13 2-in-1 also feels just as sturdy as its sibling; there’s no flex to the case around the keyboard or the screen. The one major difference is the convertible’s two prominent hinges, which prevent the display from sitting flush with the keyboard.

Those hinges make the convertible XPS 13 look a bit less refined than the original, but at least they’re put to good use: They allow the display to swing around 360 degrees. The XPS 13 2-in-1 can flip around in a “tent” formation, which is ideal for bingeing on Netflix in bed, and a “stand” mode, which puts the display facing toward you with the keyboard resting facedown. And, of course, moving the display all the way around turns the machine into a tablet (albeit a fairly hefty one). Thanks to the hinge design, I was able to smoothly transition the 2-in-1 among all of its different modes, and I was pleased to see that the display held steady at just about every angle. Sure, Dell is aping the convertible design that Lenovo pioneered with its Yoga line, but it’s hard to blame the company for copying when so many others are doing the same.

At 2.7 pounds, the 2-in-1 clocks in at around the same weight as the XPS 13. It feels substantial in your hand, but it’s also light enough to forget about in your bag. As a tablet, though, don’t expect to be holding it one-handed for too long. At least Dell made the convertible thinner: Its tapered chassis measures between 8mm and 13.7mm thick, whereas the XPS 13 measured between 9mm and 15mm. That’s not a huge difference, but it’s still noticeable. 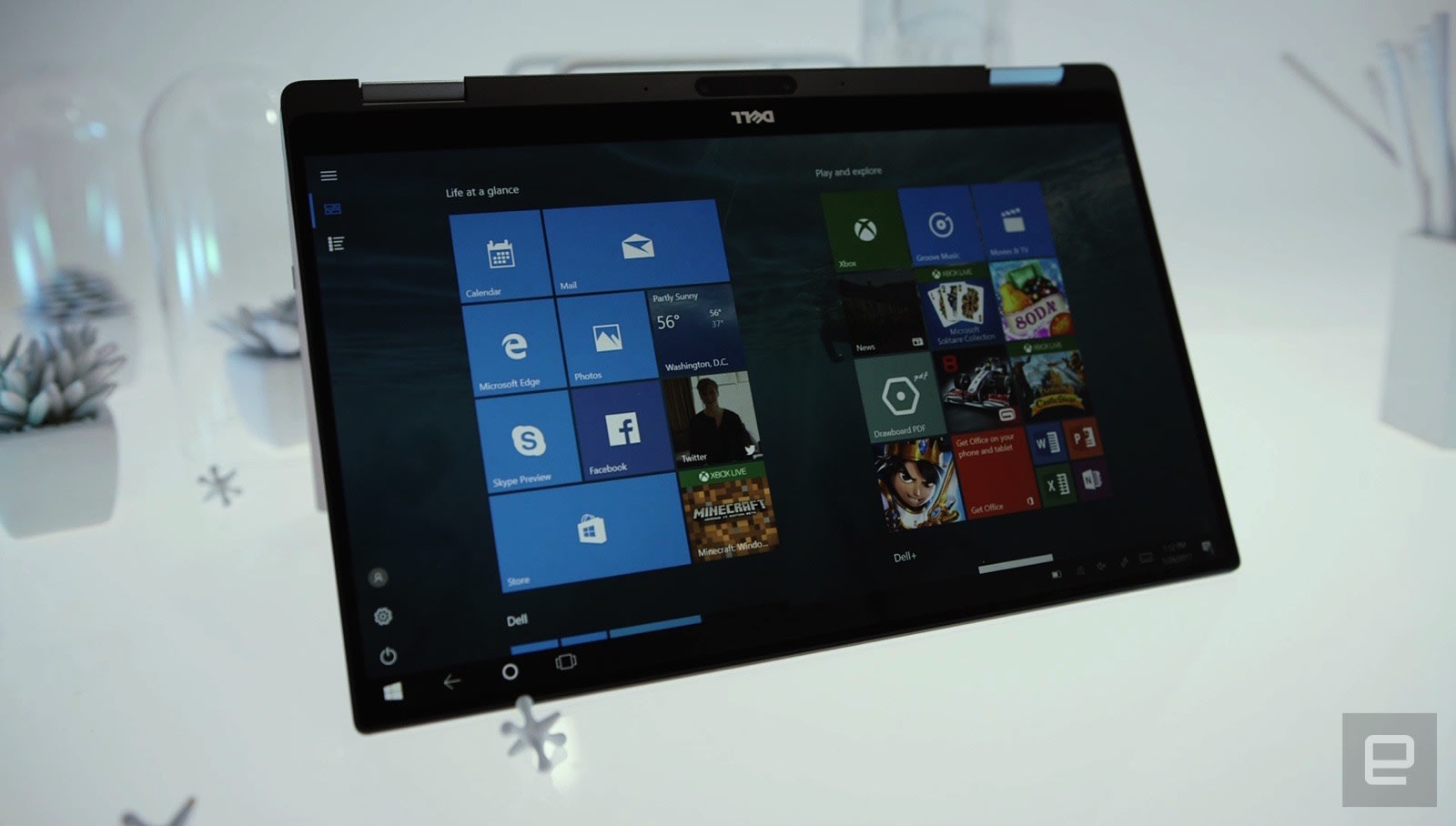 As you can imagine, that small frame makes it a wonderfully portable computer. Thanks to its skinny bezels, it can fit into bags meant for 11-inch laptops. But, as usual, there’s a cost to being so thin. The XPS 13 2-in-1 doesn’t have room for full-size USB connections. Instead, it packs in two USB-C ports on each side, which can handle charging and external displays. One socket is also Thunderbolt 3.0 compatible, which makes it around eight times as fast as USB 3.0 for data transfer. Thankfully, Dell includes a dongle in the box to get your older devices connected to USB-C.

Aside from a connection for a laptop lock, there’s also a microSD card slot, a headphone jack and a useful battery life indicator. (It’s something I’d like to see in more laptops.) Once again, Dell chose to put a 720p webcam right below the screen — but at least it’s centered this time, instead of being shoved to one side. Your Skype calls won’t exactly be flattering in laptop mode when you have a camera pointing at you from that angle, but you can always opt to take video calls in the tent mode, which positions it above the display. The webcam also has infrared capabilities, but you won’t be able to use it to log in with your face via Windows Hello until later this year. For now, you can rely on the fingerprint sensor beside the touchpad, which performed reliably in my tests. 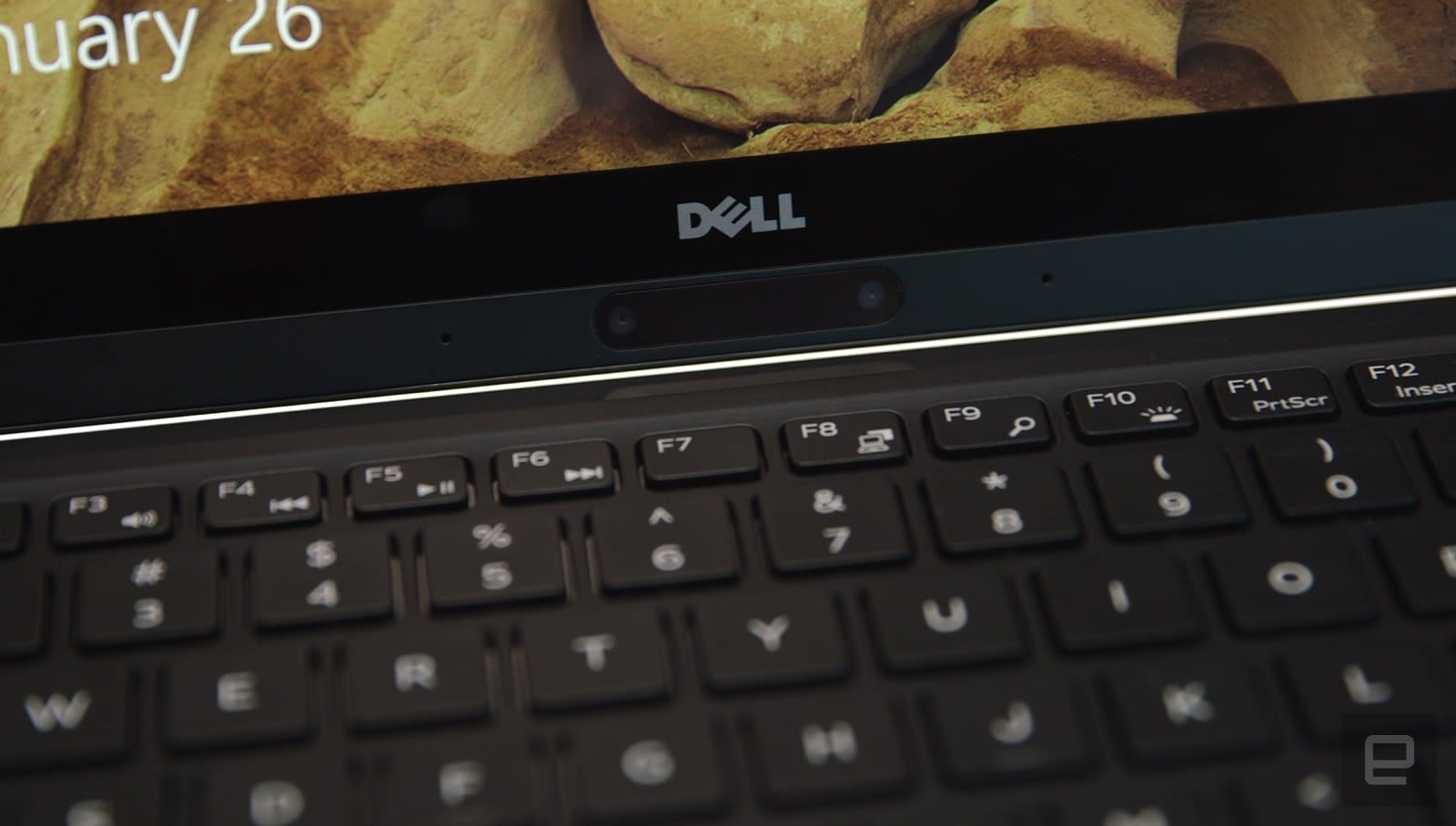 The XPS 13 2-in-1’s backlit keyboard is as comfortable as ever, offering a satisfying amount of travel with every key press. My typing speed was about on par with what I can achieve on my 13-inch MacBook Air and Lenovo’s recent ThinkPads: typically about 76 words per minute. I somewhat expected Dell to make the keyboard shallower to compensate for the slimmer case, but fortunately that wasn’t the case. Dell’s Precision Touchpad, a component actually built by Microsoft, was also among the best I’ve used on a Windows laptop. It had no trouble interpreting multi-finger gestures for scrolling around web pages and documents, and it handled typical mousing tasks well too.

Another feature worth mentioning (or, really, the lack of one): The XPS 13 2-in-1 has no fans. Instead, it relies on passive cooling and a very efficient processor to manage heat. Given that I struggle with my MacBook Air’s fans daily, it was honestly refreshing not to hear constant whirring whenever I started stressing the system. The computer definitely gets warm, especially on the bottom of its case, but it was never uncomfortably hot to hold in my lap. It seems like a small change at first, but I’d imagine plenty of consumers would be into owning a fanless laptop. 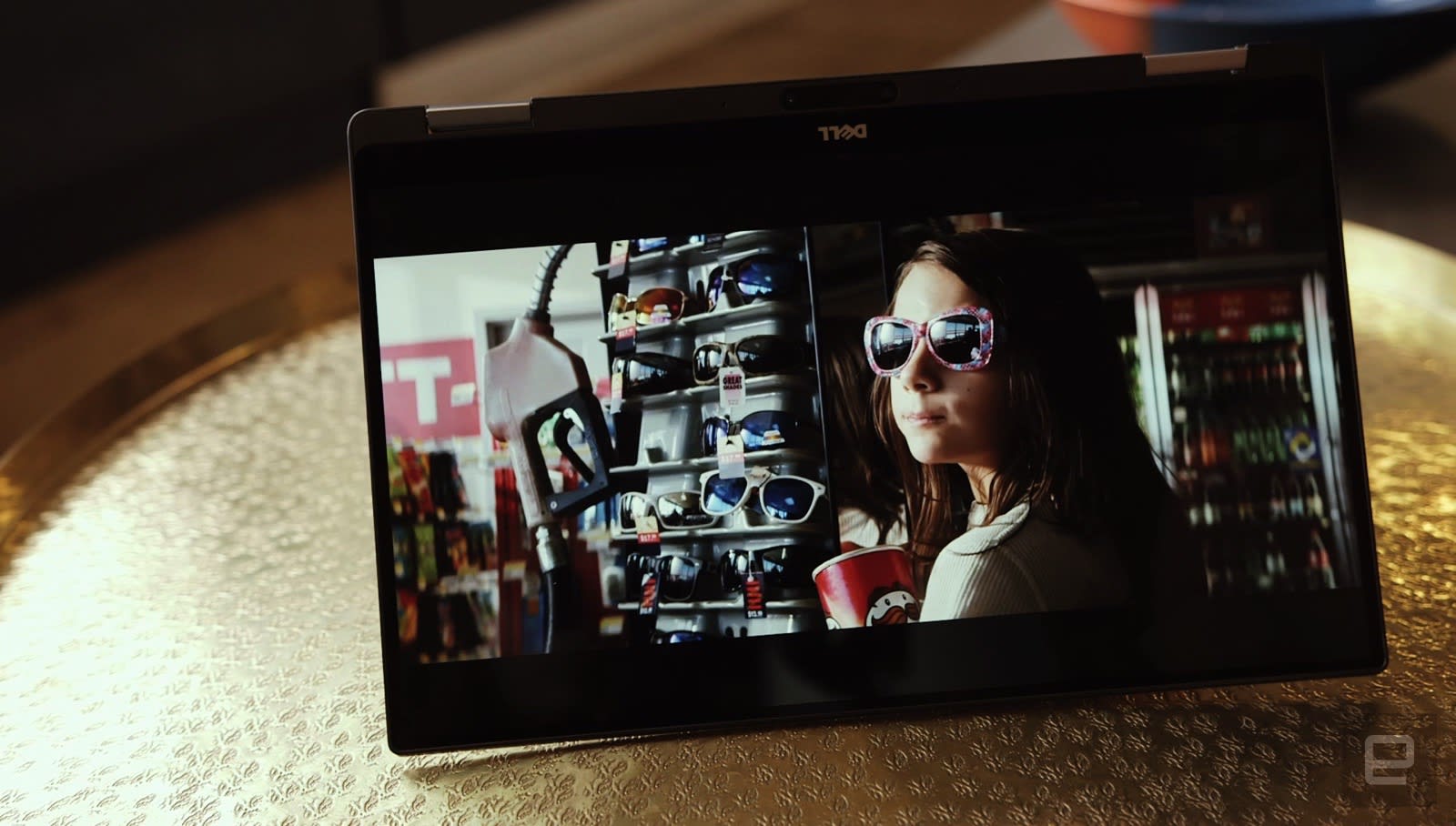 Dell delivers a gorgeous 13.3-inch screen with the 2-in-1. It keeps the “InfinityEdge” bezel from the XPS 13, which measures just 5.2mm thick. I tested out the 1080p version of the display, which was bold, colorful and relatively sharp. (I would have really liked to see the Quad HD+ version of the screen in action, though.) It was plenty bright indoors, and highly usable in direct sunlight.

Though it wasn’t as high-res as some other laptop screens I’ve seen lately, like Lenovo’s Quad HD OLED ThinkPad, the XPS 13 2-in-1’s panel was particularly impressive when streaming video and displaying digital comics. It was great for diving into Fiona Staples’ intricate artwork in the latest issues of Saga. And yes, you can bet that I made heavy use of the 2-in-1’s tent and tablet orientations for all of my testing. Given that many consumers would be interested in this computer for lounging around in bed and on the couch, it’s a good thing the screen can keep up with my endless media diet.

In day-to-day use, the XPS 13 2-in-1 felt as zippy as most other ultraportables I’ve tested recently. I didn’t notice any speed issues, even as I had multiple browsers open with dozens of tabs, Slack, Spotify, Evernote and Paint.net all running at the same time. As the benchmarks below reveal, though, it’s actually a bit slower in both general performance and 3D graphics than the 2015-era XPS 13. That’s still a major accomplishment, since we typically expect much lower performance in fanless laptops (looking at you, MacBook). But we’re also seeing the slight limitations of Intel’s seventh-generation Y-series chips.

Our review model is powered by a Core i7-7Y75 CPU running at 1.3GHz to 1.6GHz along with 8GB of RAM. The fact that it compares well with the XPS 13, which was powered by a faster i5-6200U chip the last time we benchmarked it, is impressive. Dell also implemented a dynamic power mode that pushes the 2-in-1’s hardware in short bursts. But really, if performance is your main concern, you’re better off looking at the refreshed XPS 13, or HP’s revamped Spectre x360, both of which support Intel’s faster U-series chips.

Honestly, though, if I had never seen the benchmarks, I probably wouldn’t have noticed the convertible’s slightly limited performance. It worked perfectly fine as a traditional laptop. In the tent and stand orientations, it had no trouble dealing with my constant swiping. Admittedly, the XPS 13 2-in-1 doesn’t exactly make for an ideal tablet, given that it’s almost three times heavier than most premium slates today. But I found the mode useful when I really wanted to dive into a long article or comic. I’d never suggest anyone buy a convertible laptop if they’re mainly interested in using it as a tablet. It’s more ideal if your needs tend to shift throughout the day.

The 2-in-1 typically lasted a full eight-hour workday, with around an hour of juice left to spare. In our battery test, which involves playing an HD video on loop until the computer dies, it lasted around eight and a half hours. That’s about an hour more than we saw with the original XPS 13, but it’s thoroughly bested by Lenovo’s Yoga 910, which lasted an impressive 16 hours and 13 minutes in our test, and the HP Spectre x360, which notched 13.5 hours. 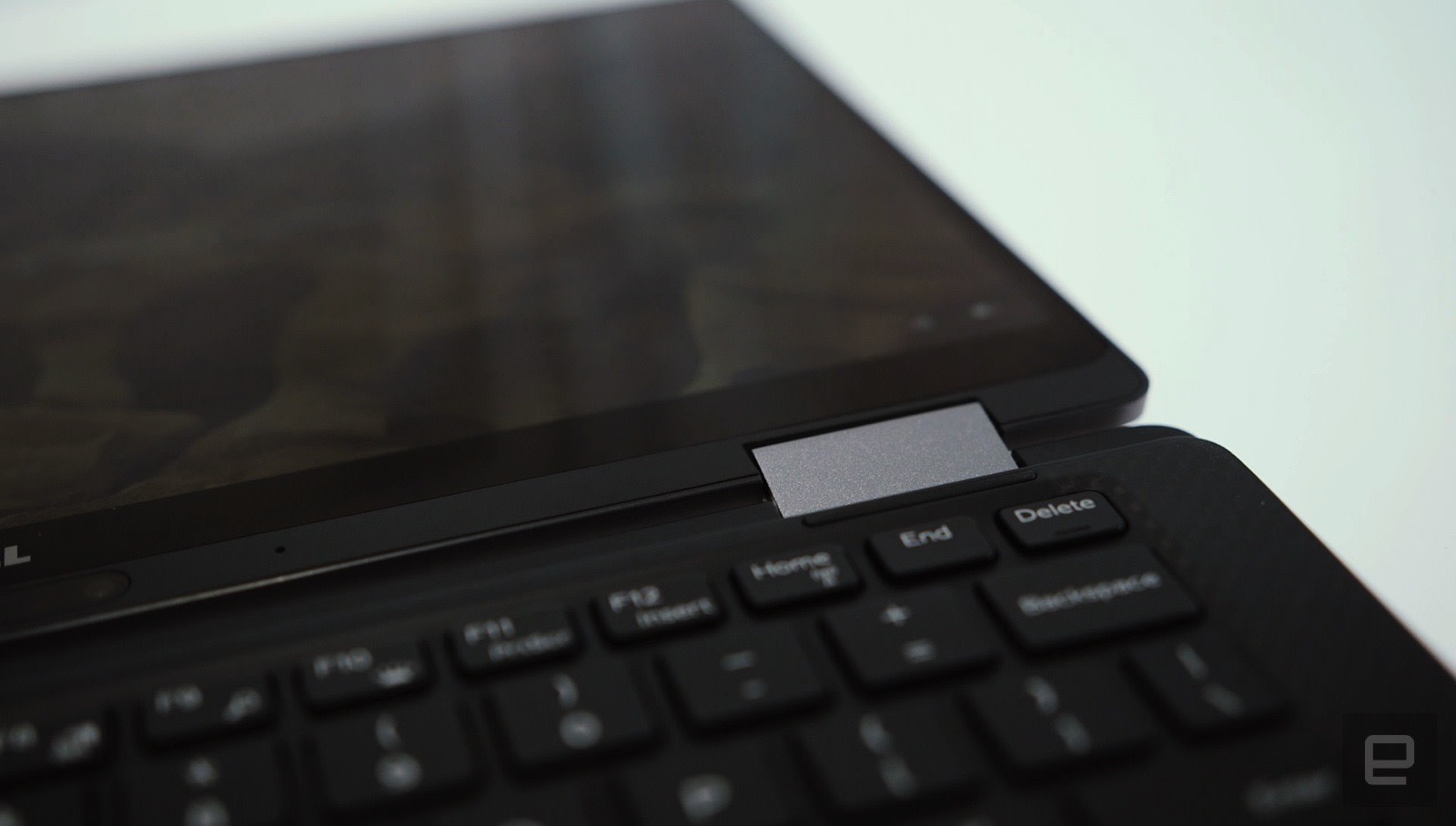 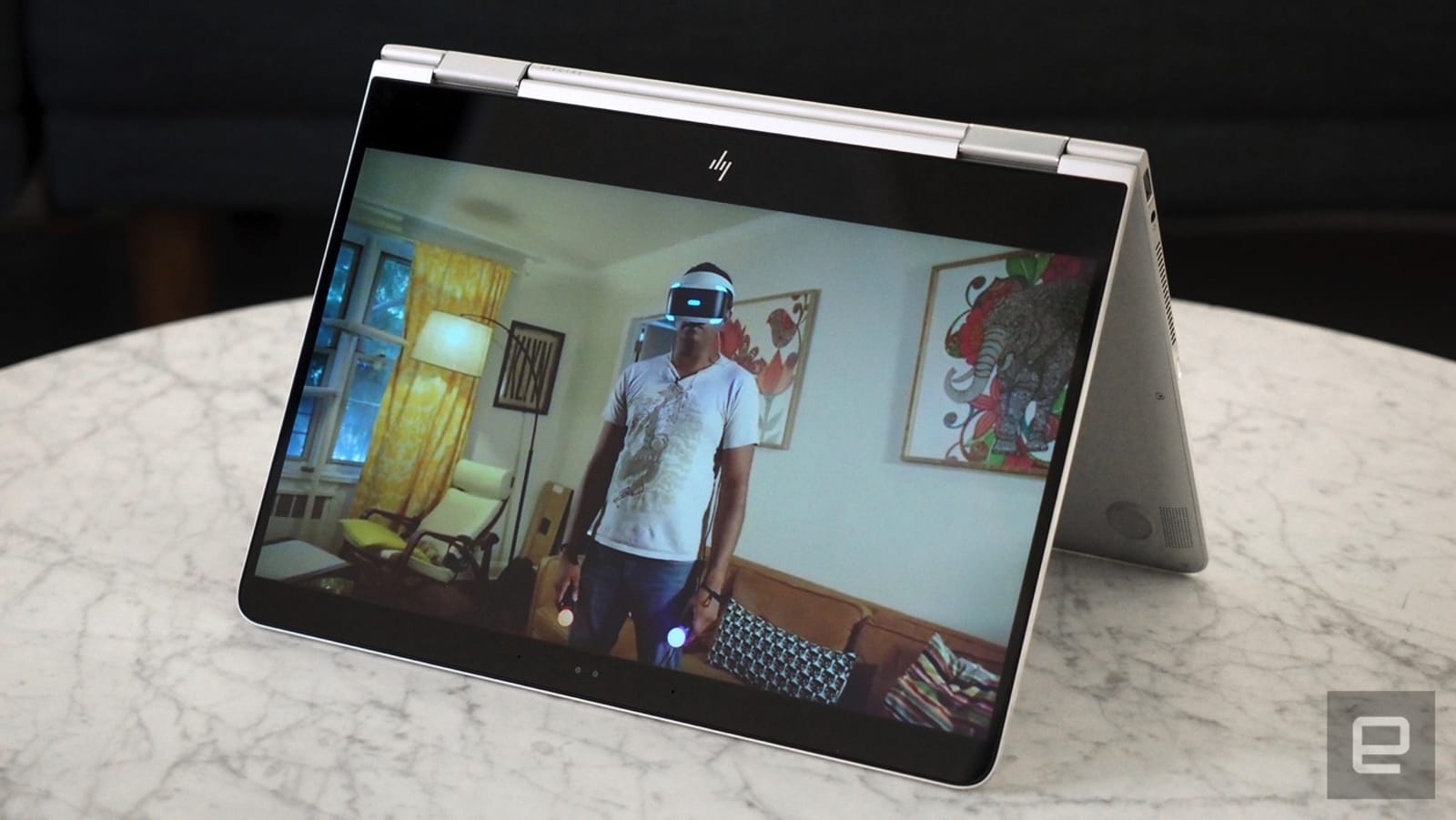 While Lenovo kicked off the trend of bendable laptops, plenty of PC manufacturers are now offering their own spin on the concept. Most recently, we looked at HP’s new Spectre x360, which came with a few improvements and a whole new set of compromises. Lenovo’s Yoga 910 is also a decent alternative, though it doesn’t have Thunderbolt-compatible USB-C ports. I was also wowed by Lenovo’s ThinkPad X1 Yoga, though its starting price of $1,682 puts it in an entirely different league (same with the recently refreshed Surface Book).

It’s worth considering if you need a convertible at all. If you just want a nice and light traditional laptop, there’s a plethora of options out there, including the standard XPS 13. And as I mentioned above, those machines will typically offer more speed for your dollar, not to mention better battery life. 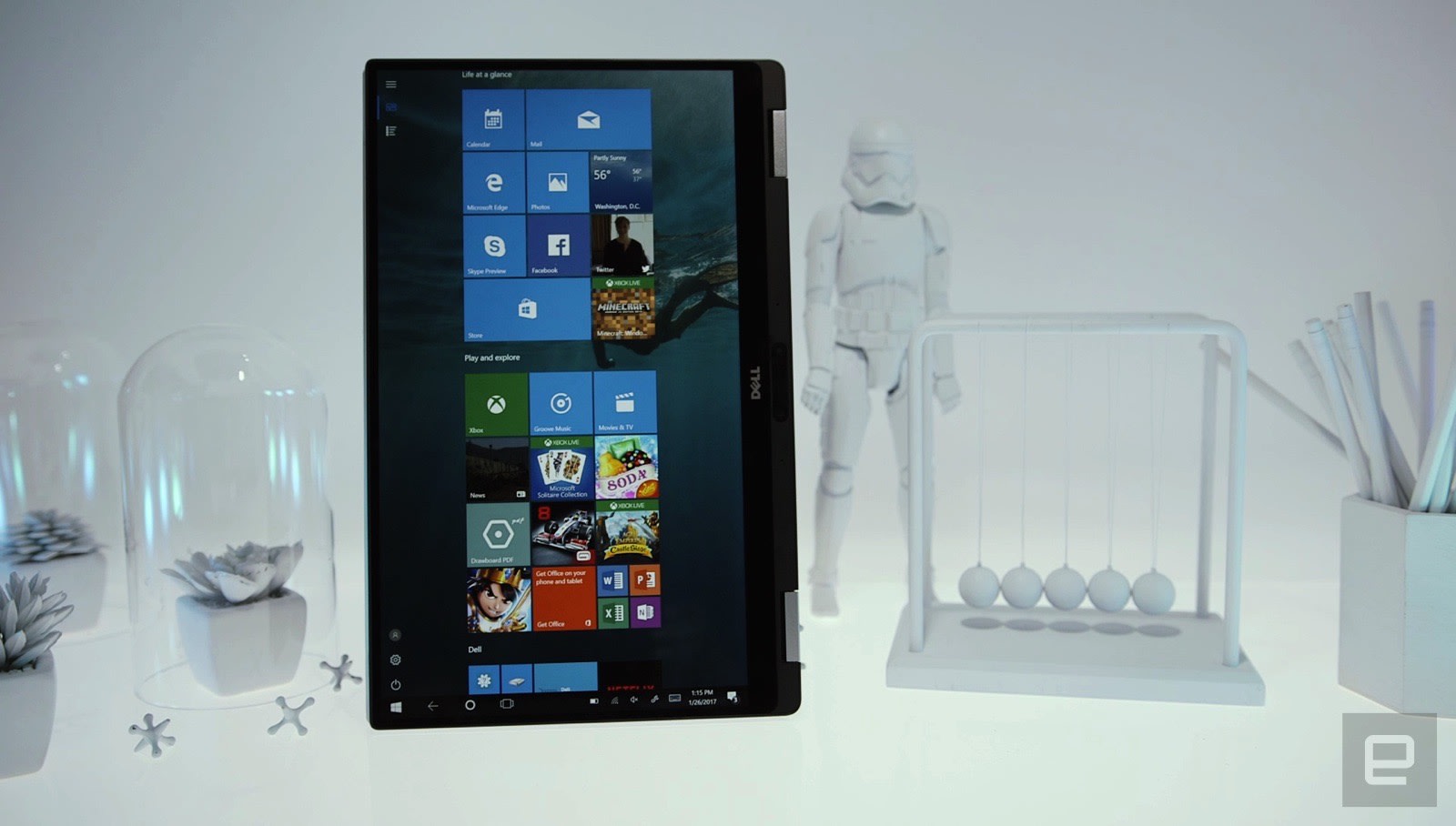 Yes, we’ve seen convertible laptops like this, but none with Dell’s XPS styling. And, based on my conversations with potential PC buyers, that alone could be enough to tempt them away from rival machines. While Dell made some concessions with the XPS 13 2-in-1, I’m ultimately impressed that it managed to deliver a premium convertible laptop that mostly lives up to its beloved predecessor.

By Devindra Hardawar @devindra
Devindra has been obsessed with technology for as long as he can remember — starting with the first time he ever glimpsed an NES. He spent several years fixing other people’s computers before he started down the treacherous path of writing about technology. Mission accomplished?
Engadget RSS Feed 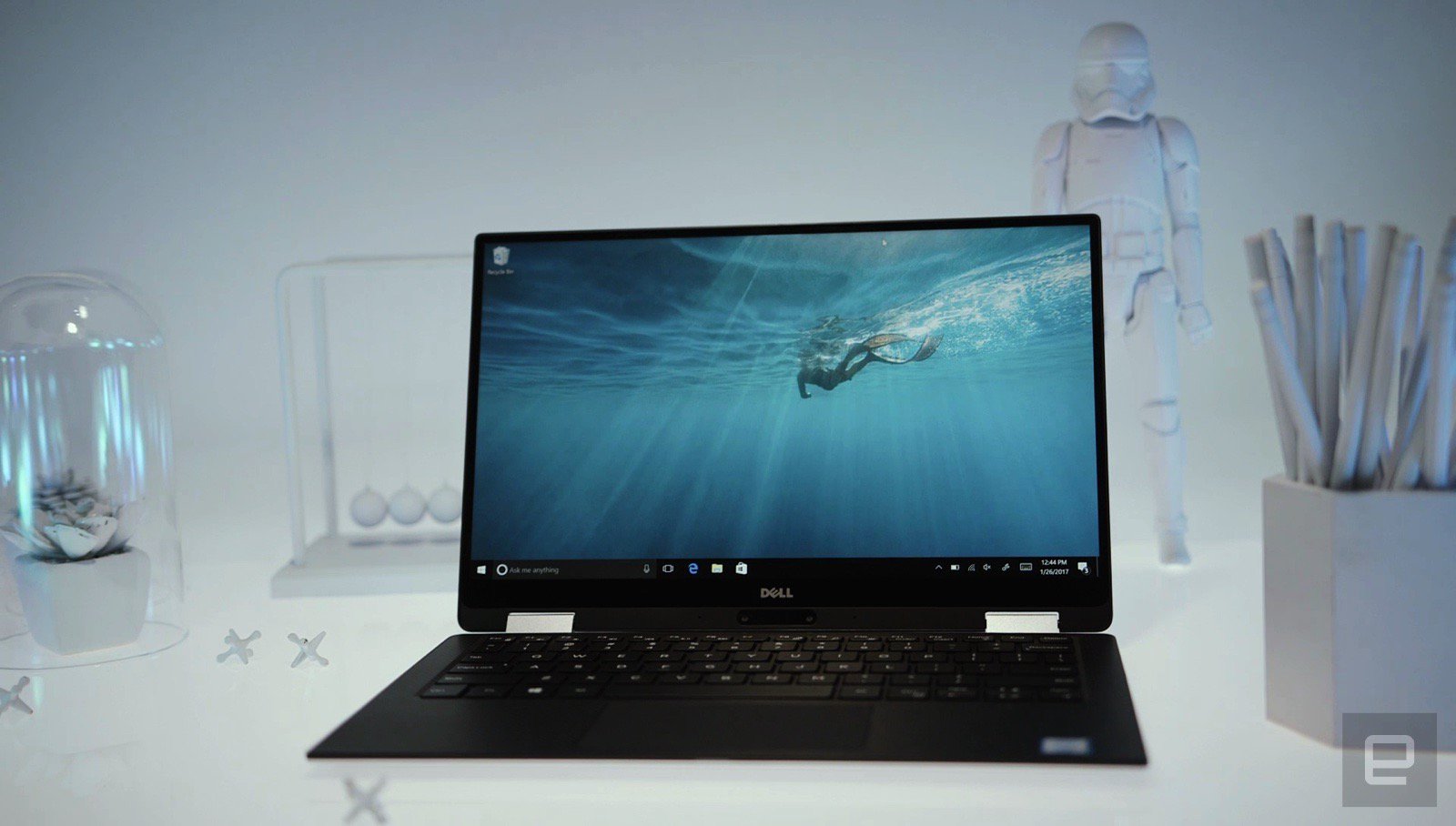