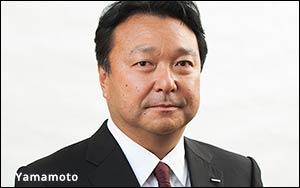 Dentsu confirmed today that a 36-year veteran of the holding company, Toshihiro Yamamoto, will become the next president and CEO of the firm, effective January 23.

Yamamoto will succeed Tadashi Ishii, who said in December he was resigning as a way to take “full responsibility” for the death of a young Dentsu employee whose apparent suicide in December of 2015 has been linked to the excessive amounts of overtime she had been logging in the months leading up to her death. A government probe of the company’s working conditions in Japan is ongoing.

Dentsu announced the succession plan at the conclusion of a board of directors meeting that took place Thursday. After handing over the CEO reins, Ishii will remain a board member until his term expires in March.

The incoming CEO issued this statement:

“My mission is to re-establish trust in Dentsu in Japan, and build a sustainable growth path for the long term. I believe it will become a reality with the improvements we are making to create a more flexible working environment where our diverse talents will thrive to help create value for our clients and professional fulfillment for our people.”

The appointment comes the same week that Dentsu issued a report based on an internal probe of its digital advertising practices in Japan after client overbillings and other irregularities were discovered last fall.

Yamamoto, 58, has held numerous positions at the firm since joining Dentsu right out of college in 1981. Dentsu noted that he is the only firm President to have led all three Japan-based business domains: Media Content, Account Services and Business Development. He became a board member in 2014 and was named senior vice president in January of 2016.