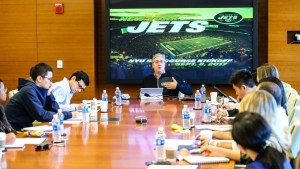 The New York Jets have been one of the most inconsistent teams in the NFL over the last decade, but help is on the way from the college ranks. No, not a stud quarterback or defensive lineman, but a crop of undergraduate and graduate students who have been studying the Jets and training to help the team solve some of its most pressing business and marketing problems.

This is thanks to a brand-new partnership between the Jets and the NYU School of Professional Studies (NYUSPS) through which a hand-selected group of the university’s students will take a Jets-themed course every semester taught by NYU faculty working alongside team executives. Students will also have access to a Jets-oriented innovation lab geared toward generating new sports, media, or entertainment ideas through an accelerator, hackathons, and/or demo days, that could be implemented by the NFL team.

“For us, it’s always about trying to be innovative,” Jets president Neil Glat told Fast Company. “Having access and [building] relationship with students doing innovative things, whether in the sports space or media [is] helpful in staying current.”

While it would tempting to think of the partnership as a purely academic exercise–albeit one that could help NYU students land internships or even staff jobs with the Jets–Glat is quick to reject that notion. “We’re interested in real-life applications, business executions, new fan engagement opportunities, and new offerings for our fans,” he said. “This is not meant to be theoretical. This is meant to be something that is actualized.”

That’s why, Glat continued, the first course will task NYUSPS students with optimizing the Jets’ mobile app, coming up with potential improvements to the fan-facing tool within a year. “It’s not just something that’s talked about,” he said. “It’s going to be done.”

Teaming with the Jets is the latest in a string of NYUSPS’s partnerships with industry. Previously, it has offered courses that give students direct access to execs from Fox Sports, ROC Nation, the New York Mets, and espnW.

But NYUSPS dean Dennis DiLorenzo says the Jets partnership is on a different level–the first time students have had the opportunity to take a course, as well as participate in efforts to directly impact and innovate the partner’s business, while also helping to boost its sense of social responsibility. “All of those things are tenets of this relationship,” DiLorenzo said. “We’re hoping to take it to the next level.”

The dean said NYUSPS wanted to work with the Jets because the partnership blends well with the school’s mission of offering students an “experiential learning model.” And that mission, in fact, helped the team and the school design the partnership’s elements.

Part of that was helping the Jets develop better business practices, DiLorenzo said, that are meant to open doors to more diverse perspectives–something that is a key part of the school’s brand of education. “The Jets have always been about grit and welcoming fans from all walks of life,” he said, a similar element of the NYUSPS mission. “So the partnership was born.”

More specifically, he said, the Jets have a very blue-collar fanbase, while NYUSPS strives to attract people beyond those who might normally attend a professional school. That similar focus helped both sides see that they were on the same page. “We’re in the business of making leaders, and building leaders from all walks of life,” DiLorenzo argued, “not just supporting people who’ve already achieved leadership status.”

That philosophy no doubt appealed to the Jets, a team that while having been in the NFL for decades, has struggled to keep up with more star-studded and successful teams like the New York Giants, New England Patriots, Dallas Cowboys, and others.

And are students interested in taking part? Definitely, said DiLorenzo.

“We sent this out to our student population with very specific criteria of experience and academic success,” he said, “and we had students compete to see who could get into that class based on their portfolios and interviews.”

The school put out the call for applicants in July, and got more than 100 students vying for just 18 seats in the class that began last week.

“We didn’t have a lot of time to promote this,” DiLorenzo said, “but they came forward the minute that they saw this. 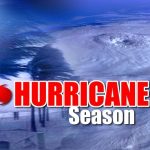 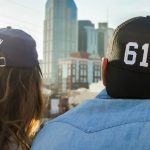 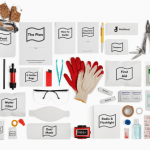 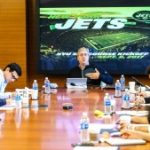 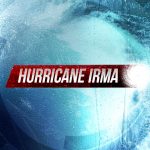 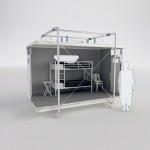 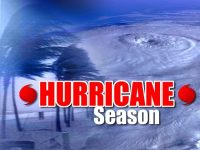