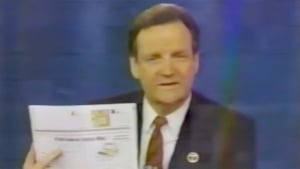 Here’s proof (from 1988!) that Apple leaks are nothing new

The product leaks that Apple fans are obsessed with at the moment involve the upcoming new flagship iPhone. But long before the era of blogs and Twitter, Apple was not entirely successful at keeping its secrets secret.

I just found and digitized a local news item from San Francisco’s KGO, broadcast in February 1988. It features the late tech-media pioneer David Bunnell, whose latest publication, at the time, was an Apple-centric weekly called Macintosh Today. Remarkably, it had gotten ahold of a 160-page internal Apple document about the Macintosh Portable, the company’s first truly mobile computer, which didn’t get announced until the following September.

Here’s Bunnell talking to news anchors Pete Wilson and Suzanne Saunders Shaw, both which were identified for me by former KGO producer Martha Feingold. At one point, Wilson wonders if the whole leak was secretly plotted by Apple as a promotional stunt:

Apple couldn’t have been happy about Macintosh Today scooping its long-off unveiling, but the main thing people remember about the Mac Portable isn’t the leak. Instead, it’s the fact that the computer became one of Apple’s more notorious flops–an pricey 16-pound boat anchor of a machine that was eventually superseded by the vastly more appealing PowerBook.

‘Apple 1988 From Here's Leaks Nothing Proof