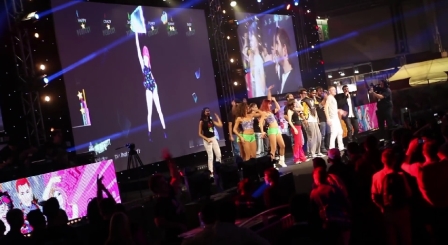 by Chris Watters | Communications Specialist | on August 17, 2016
Have you ever thought, while shimmying around your living room to the tune of “Under the Sea” from The Little Mermaid, that hey, your moves are pretty darn good? Heck yes, they are! And soon you’ll have a chance to prove it on the world stage in the third annual Just Dance World Cup. Announced today by Ubisoft and the ESWC (eSports World Convention), the Just Dance World Cup is back after attracting more than 3,500 participants last year.

Players eager to show off their dancin’ feet can qualify in one of two ways; they can compete in a live event or they can tally top marks on the online leaderboards. The live events include Brazil Game Show in São Paulo (9/1-9/5), Paris Games Week (10/27-10/31), and TubeCon 2016 in Oberhausen, Germany (11/20). If you choose to earn your spot online, you’ll need to play the online multiplayer mode of Just Dance 2017 between November 6 and January 8, 2017, to compete for a top slot on your country’s leaderboards. For more information on the Just Dance World Cup and eligibility information, visit the Just Dance World Cup official page.

Just Dance 2017 Coming to Consoles and PC This Fall, Confirmed for NX