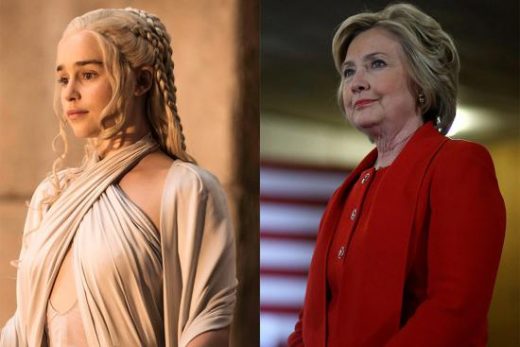 Kareem Abdul-Jabbar: What ‘Game of Thrones’ Says About Our Election Nightmares

Kareem Abdul-Jabbar: What ‘Game of Thrones’ Says About Our Election Nightmares

The last two episodes of Game of Thrones serve as a perfect parallel of the meh attitude of a majority of Americans toward our presidential choices: one brought back from the dead (of 2008) and the other wanting to feed his enemies (journalists, Mexicans, Muslims, women) to the dogs. The show is a subtle panorama of the American political landscape: how the sins of the ambitious political “parents” are visited upon the heads of their children; how the manipulation of politics by the “High Sparrow” of the religious right undermines freedom; and how the crucial differences in female and male approaches to problem-solving draw out our biases when it comes to selecting leaders.

The world of Thrones is no country for young men—or young women. The savagery is constant. Brutality is a consistent theme in politics, too: a medieval generational trickle-down of carnage and vengeance. Cersei Lannister’s (Lena Headey) scorched-earth policies have resulted in the deaths of all her children, despite her ascendance to the throne she always craved. Yet, she is also the product of an overbearing and ruthless father, Tywin Lannister (Charles Dance), whose willingness to sacrifice his son Tyrion Lannister (Peter Dinklage) for political expediency, ended with his son avenging himself by killing his father while he sat on the toilet.

The moral for Americans? When we don’t learn from the mistakes of those who came before, we inherit a legacy of ignorance and are condemned to repeat mistakes with the same tragic outcomes. Many Bernie Sanders supporters believe he is someone who can break this cycle of venal self-serving politics with his bold proposals. Oddly, Trump’s supporters profess the same hope, despite the fact that everything about his campaign screams, “Release the Kraken!” not political reform. They are like the followers of the evil “bastard” Ramsay Bolton (Iwan Rheon), who, despite assassinating his father, and raping, castrating or torturing nearly everyone else, still follow him into battle like wind-up toys, all springs and gears with no analytical ability.

Read: On Game of Thrones, the Meek Are Inheriting Everything

Of all the metaphors between Thrones and politics, the one that best represents our frustration is the High Sparrow (Jonathan Pryce), a religious leader who deftly hides his raging political ambition behind folksy speeches and soft-spoken sanctimonious piety. Coercing fealty through torture while forcing his moral dogma on the kingdom through threats of armed insurrection makes him less a religious leader than a terrorist zealot. Remind you of America’s religious right? More than a little.

The High Sparrow’s condemnation of homosexuality as an executable offense echoes a real-life hardcore orthodoxy. Ironically, the attempt to force one’s religious beliefs on others through law, as sharia does in some Muslim countries, is an admission that people wouldn’t follow that religion otherwise. Perhaps that’s why the wayward Tyrion Lannister, who allies himself with the Mother of Dragons, an emancipator of slaves, rejects the old notions of blind faith in favor of a leader who actually accomplishes progress.

The most damning analogy, though, is in how men and women are so differently portrayed in the pursuit of political power. Jon Snow rejects his sister Sansa’s urging to have patience and gather more support. He also ignores her advice to not get suckered into attacking Ramsay, which results in the unnecessary slaughter of many of his men. Realizing his mistake, Jon Snow stands poised to single-handedly take on thousands of charging soldiers. So heroic; so dumb. It is actually Sansa’s behind-the-scenes negotiation for military support that wins the day. Yet, when it is all over, the men rally around Jon Snow as their new leader, despite his poor choices in battle and despite Sansa’s tactical brilliance.

So, too, is Daenerys Targaryen, Mother of Dragons, underestimated by the various male leaders she confronts throughout the series—to their detriment. Having conquered every male-dominated society she’s come in contact with, she’s ready to take her progressive social programs across the world. Thrones has its share of evil, ambitious women, but it is the good women who wish to change the world for the better, while the men, even the good ones, fight for power and vengeance. That parallel with this presidential election is just too obvious to warrant another sentence. 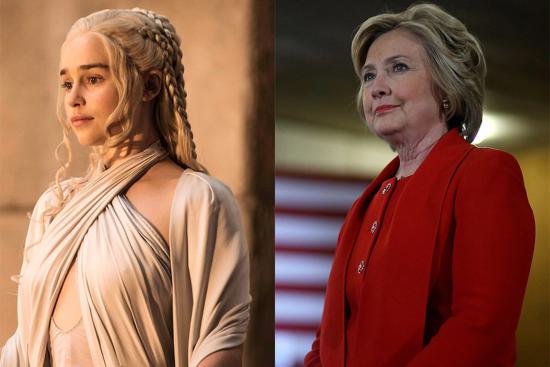