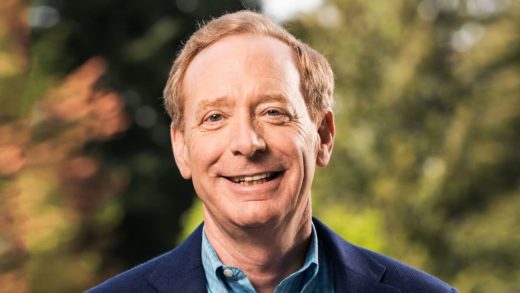 If you sat down to compile a ranking of the most recognizable top executives at leading technology companies, Microsoft president Brad Smith would probably not make even your long list of contenders. But though he is not exactly a household name, Smith nonetheless plays as critical a role as his boss, CEO Satya Nadella, as an emissary to the world beyond Redmond.

A lawyer by training and a 26-year Microsoft veteran, Smith is intimately responsible for the company’s relationships with customers, competitors, governments, and NGOs. His purview, in other words, is Microsoft’s place in society. And that means that it goes far beyond the humdrum business of selling of software and services to encompass everything from fair elections to immigration policy to the risks of AI—subjects that raise ever-bigger questions without obvious answers.

Now Smith has turned his thinking on such matters into a book, Tools and Weapons: The Promise and the Peril of the Digital Age, which he wrote with Microsoft director of communications and external affairs Carol Ann Browne. By putting his thoughts on paper, he’s following a long-standing Microsoft tradition. In the 1990s, cofounder Bill Gates made the bestseller list twice, with the largely optimistic The Road Ahead and Business @ the Speed of Thought. And two years ago, Nadella published a tome of his own that was partly about his effort to reboot Microsoft and partly about where technology might take us next.

In 2019, a book about tech’s present and future impact on humankind that was relentlessly upbeat would feel out of whack with reality. But Smith’s Microsoft experience allowed him to take a measured look at major issues and possible solutions, a task he says he relished.

Bring in the feds

Tools and Weapons is full of elements that Smith and Browne have previously examined in Microsoft on the Issues, a surprisingly thoughtful corporate blog that doesn’t just consist of the boilerplate stances you’d assume every giant technology company holds. And the blog comes up in the book, in a discussion of an incident involving a Microsoft contract with the U.S. Department of Homeland Security’s Immigration and Customs Enforcement (ICE). Though the deal involved mundane technology such as the cloud migration of email and calendaring, Microsoft marketing materials had off-handedly referenced the possibility of ICE using Microsoft-provided facial recognition.

With ICE separating migrant children from their families at the border, an uproar over Microsoft’s business with the agency resulted, with some employees calling on the company to cancel the contract. That didn’t happen. But the controversy did prompt the company to ruminate on how to prevent facial recognition from being used for harmful purposes. Smith ended up writing a “Microsoft on the Issues” post calling for governments to regulate the technology rather than relying on providers such as Microsoft to make the call on what’s appropriate. He has since reiterated that position.

By blogging this stance, Microsoft got at least slightly ahead of the controversy over facial recognition, which has only intensified since. “I don’t think there has been another technology policy issue that has evolved as far and as fast as facial recognition has in the last 12 months,” Smith says. “Because when we published a blog in July of last year saying this is a space that will need government law and regulation, most people in the tech sector asked us why we were even talking about this. The issue wasn’t on people’s radar screen. And even if it was, they didn’t really see it as a problem that governments or others would have to address.”

Absent legislation, Microsoft has to judge the ethics of government adoption of its technology for itself. For instance, Smith has disclosed that it declined to provide facial recognition for use by police in California, in part out of concern that current algorithms are too inaccurate when trying to identify people who aren’t white males.

But Microsoft has chosen to judge each use of its technology with pinpoint precision, and has declined to position itself as the overarchingly anti-Trump force that some of its employees would no doubt like it to be. That’s why the company simultaneously said it was “dismayed” with ICE’s child separations and continued to provide cloud migration services to the agency. Smith has also said that Microsoft welcomes any opportunity to work with the Trump administration on cybersecurity measures.

With any government entity, Smith says, the company’s philosophy is that “we will partner where we can and stand apart where we should . . . And it would be a mistake to refuse to partner on an issue like cybersecurity because we disagree on an issue like immigration.” That is not a Trump-specific position: He points out that Microsoft sued the Obama administration four times over policy relating to government requests for customer data.

Smith joined Microsoft in 1993, a year after Nadella, and spent 13 years as the company’s general counsel before becoming president. But almost all the events he discusses in Tools and Weapons date from the period since Nadella became CEO in 2014, except for Edward Snowden’s 2013 leak of classified NSA materials, an act Smith calls “a political earthquake.” That makes the book a chronicle of the Nadella era, in which Microsoft has become the world’s most valuable company while shedding some of its traditional sharp-elbowed brashness.

Nadella’s emotional awareness has helped Microsoft find its way in challenging times, says Smith: “Leading a tech company at the end of this decade is completely different, culturally, from what it was like to lead a tech company when this decade began. The expectations of people, the expectations especially of a new generation of employees, are very different. And it calls for new approaches and different styles of leadership.” He adds that Nadella is “almost uniquely broad-minded and then deeply principled, in terms of his own style of leadership.”

Which is not to say that Microsoft thinks leadership is always about making employees happy. In 2018, after employees protested a Google contract that had the company providing AI services to the U.S. military, that company decided to let the agreement lapse rather than renewing it. Tools and Weapons mentions that, among numerous references to other tech giants and how they’re wrestling with some of the same questions as Microsoft. But the book also explains why Microsoft, faced with its own internal uprising over defense contracting, chose not to reverse course.

Though Microsoft’s leadership wasn’t convinced by the dissenting employees, Smith stresses that they still played a constructive role in the company’s thinking. “It’s actually harder to ask the right questions than to have the right answers,” he says. “And so, if a group of employees has answers that you think may be wrong, don’t discount the possibility that they’re nonetheless asking the right questions.”

Looking back, and forward

For a book that sometimes has a current-events feel to it—Smith says that he and coauthor Browne had to scramble to get the latest details relating to matters such as New Zealand’s Christchurch mosque shootings into their final draft—Tools and Weapons takes an unexpectedly long view. In an industry that sometimes seems to have trouble remembering the lessons of 5 or 10 years ago, the coauthors sometimes reach back centuries in search of context for modern problems, name-checking figures such as Olga Kistler-Ritso, Louisan Mamer, Zellmer Pettet, Theodore Vail, and John Wilkes—all of whom you can Bing if their names don’t ring a bell.

Smith says that both he and coauthor Browne love history. They share that passion with Nadella, who often turns to works about the past to help him chart Microsoft’s future. Once, when Smith and Nadella were discussing the role of AI in weaponry, Smith alluded to the lessons of the Civil War. Nadella, he says, one-upped him by referencing Cicero. And then, after giving the matter further contemplation, Nadella shot Smith an email that took the conversation back even further, to ancient India.

To Smith, this dialog wasn’t just two history nerds geeking out. “I think that does capture part of the current way we at least try at Microsoft to think about these things and the way we try to play our roles, which is really about breadth of perspective,” he says.

Though Tools and Weapons is Smith and Browne’s personal project rather than an official Microsoft manifesto, Smith’s role in shaping Microsoft’s philosophies is so central that there isn’t much daylight, if any, between his take and that of the company he helps lead. And indeed, when I asked him whether he’s personally optimistic that the tech industry will solve the biggest problems that are currently roiling it, he started out talking for himself and ended up speaking on behalf of Microsoft.

“Usually, I come to the conclusion it doesn’t actually matter whether you’re an optimist or pessimist,” he told me. “Because your optimism or pessimism is not going to change what happens by itself. What actually matters is whether you’re determined and persistent. And we are both of those things.” Microsoft may no longer be the fearsome bully that many perceived it to be back when the tech business revolved around Windows, but it still goes after its goals with gusto and patience—and it will need plenty of each as it continues to tackle the challenges that Smith and Browne explore in their book. 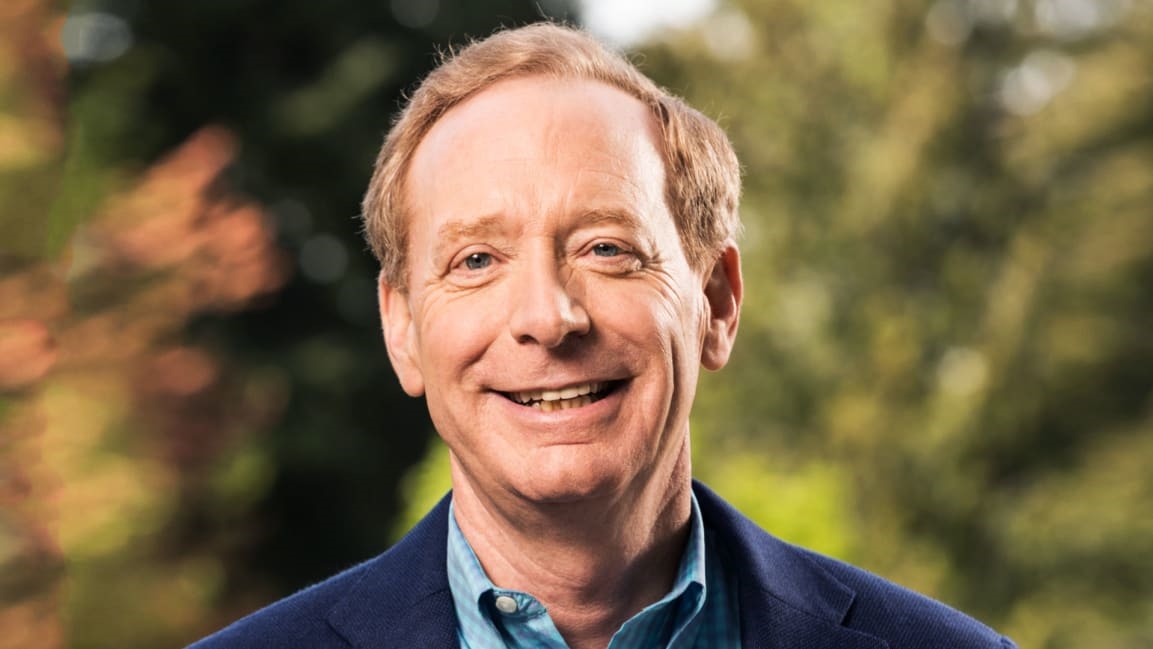