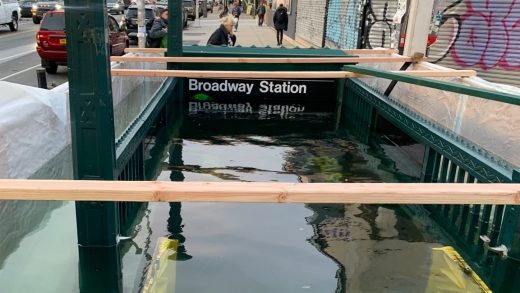 Climate change will drastically reshape our cities. Areas of New York still haven’t recovered from Superstorm Sandy seven years ago, and the city is expected to be hit by bigger, more frequent storms in the future. The MTA is preparing for how to better handle that destruction now. What looked like a Sandy-era flooded subway station this week was a test to show that the transit authority could prevent such flooding from happening.

The MTA tested a “Flex-Gate” flood barrier this week, probably shocking a few New Yorkers who walked past the G train Broadway station, which at a glance looked completely full of water, much like stations actually did during Sandy. One New Yorker, Kaye Blegvad, shared a photo of the station on Twitter, asking the MTA to explain. “We were testing a new ‘flex gate,’ which is a flood barrier that would allow us to seal off a subway entrance,” the official NYC Transit account responded. “We ‘test flood’ the entrance for four hours to make sure it was installed correctly, which it was! We’re doing this because climate change is real.”

Here’s how it works. The station was never actually flooded. See that area beneath the water where it says “no step”? That’s the Flex-Gate, which is made of Kevlar. Essentially a large sheet of waterproof fabric that sits at the top of the stairs down into a station, the Flex-Gate stops the water right at the street level. It functions “like a high-strength, horizontal window shade that covers subway entrances to prevent water from entering,” according to development and manufacturing company ILC Dover, which serves the “aerospace, personal protection, and pharmaceutical industries” and engineered the Flex-Gate. It can be deployed by one or two people in less than 15 minutes.

Sandy resulted in some $5 billion in damage to the MTA alone, the agency said after the storm, and flooding, which wreaked havoc on the underground subway system, was a big part of that. The 2012 storm saw storm surges of up to nine feet and the highest storm tide recorded in New York at that point—nearly 14 feet. But as climate change intensifies, that’s set to go from an anomaly to the new normal, yet the city’s subways begin to flood at 10.5 feet of storm surge. And not only will there be more storms with stronger surges, but the water levels that surround the city will also rise, making big storm surges more likely.

These Flex-Gates may be a temporary solution during a storm to help protect the city’s infrastructure as it waits out the high water and to allow the city to bounce back more quickly afterward, but it’s unclear what part they’ll play in New York’s long-term future when it comes to climate change. ILC built and installed 23 Flex-Gates, customized for subway entrances throughout Manhattan in New York City, in 2016 and 2017, and it seems more have been installed since. But that’s just one small part of the city’s mitigation efforts.

The MTA has installed hinged steel flood gates at tunnel portals and emergency generators, and it redesigned manhole covers to “withstand large volumes of standing water,” according to a recent 2019 Climate Adaptation Task Force report. There’s marine cabling, protection for electrical facilities with watertight doors, “deployable and permanent barriers at each tunnel plaza to form a protected perimeter,” and drainage pumps. Beginning last month and lasting through the spring of 2020, workers will be focused on the Coney Island Yard Complex, which was flooded with 27 million gallons of saltwater and debris during Sandy.

MTA officials have boasted about how New York “came back from the devastation of Sandy,” but seven years later, it’s not exactly clear that it has, and with more storms to come, will the subway system ever get ahead of climate change? That’s the hope of the MTA, and already-installed Flex-Gates that can be pulled over subway entrances in a flash may be able to provide some solace for those who have already seen a subway station flood firsthand. 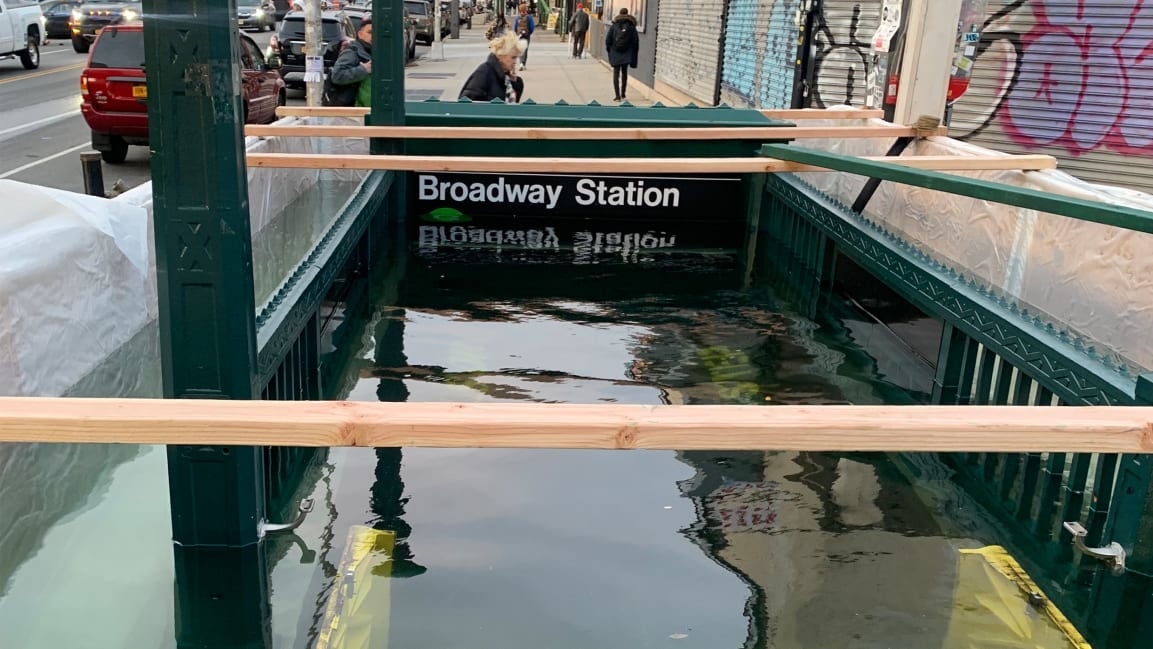