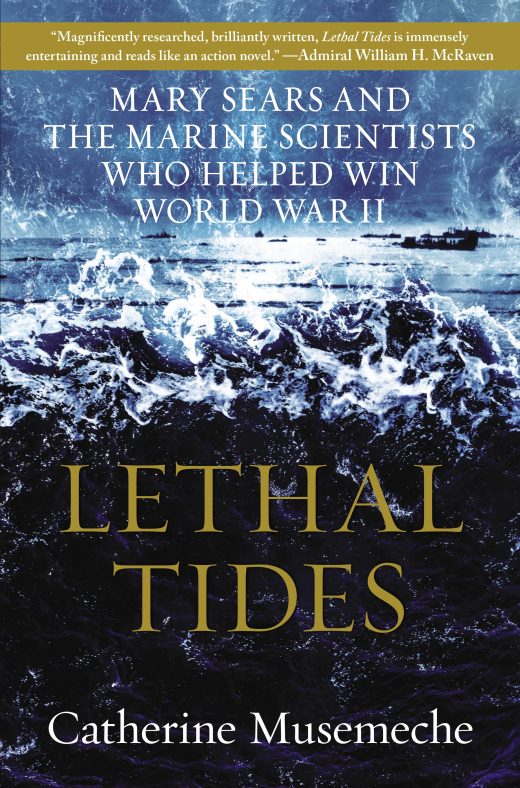 Lethal Tides tells the story of pioneering oceanic researcher Mary Sears and her leading role in creating one of the most important intelligence gathering operations of World War II. Languishing in academic obscurity and roundly ignored by her male colleagues, Sears is selected for command by the godfather of climate change, Roger Revelle, and put in charge of the Oceanographic Unit of the Navy Hydrographic Office. She and her team of researchers are tasked with helping make the Navy’s atoll-hopping campaign in the Pacific a reality through ocean current analysis, mapping for bioluminescence fields and deep-water crevasses that could reveal or conceal US subs from the enemy, and cartographing the shore and surf conditions of the Pacific Islands and Japan itself.

Four months into her job at the Oceanographic Unit, Sears had learned a lot about what the military needed from oceanographers. She had learned it from meeting with Roger Revelle and his cohorts on the Joint Chiefs Subcommittee on Oceanography where she listened to concerns about what the navy was lacking and took detailed notes. She had learned it from answering requests from every branch of the military for tidal data, wave forecasts, and currents to support tactical operations overseas. She had learned it from gathering all the known references on drift and drafting an urgently needed manual to help locate men lost at sea. The more she took in, the more she understood exactly how dire the lack of oceanographic intelligence was and how it could undermine military operations. And now she was going to have to do something about it.

Sears was no longer at Woods Hole, where she had been sidelined by her male colleagues who sailed on Atlantis and collected her specimens while she stayed onshore. For the first time in her life, she was in charge. It was now her responsibility to set up and direct the operations of an oceanographic intelligence unit researching vital questions that impacted the war. She had never been asked to set agendas, call meetings, or give people orders, much less make sure they carried them out, but she was going to have to do those things to get the military the information they needed to win the war. She was going to have to take the lead.

To assume the role of leader, Sears would need to push through her innate reserved tendencies and any thoughts racing around in her head that screamed you don’t belong here. Taking charge of a team of oceanographers did not come naturally to a bench scientist who worked alone all day staring into a microscope, especially if that scientist was a woman, but Sears had learned from watching Revelle. He had started as an academic in a tweed jacket with elbow patches, but when the navy made him a lieutenant he took on the persona of “the man in charge.”

When Revelle walked into the conference room of the Munitions Building—tall, broad shouldered, and uniformed—he was in complete control. He spoke in a booming, decisive voice. He had an answer for every question. He solved problems. Now, thanks to the overly confident Revelle, Sears was wearing the uniform too. She had stepped into his shoes at the Hydrographic Office. She was not going to let anyone think she couldn’t fill them.

During the first year of the war there had been a mad scramble in Washington to gather information about the countries where troops might be fighting, especially distant locales like New Guinea, Indochina, Formosa, and all the tiny islands dotting the sixty-four million square miles of the Pacific Ocean. World War II spilled across the globe into places most Americans had never heard of and where the military had never been. It was unlike any other war Americans had fought.

Getting to these places would be the easy part. The navy could navigate its way to just about any far-off target anywhere in the world, thanks to the nautical charts maintained by the Hydrographic Office, but what would it find when it got there? Were the beaches flat and wide or would they be narrow, steep, and difficult to land on? Was the terrain mountainous, volcanic, or swampy? Would high winds and waves impede a smooth landing? Would they land during the rainy season? Who were the native people and what language did they speak? Were there drivable roads once troops got across the beaches?

All these details mattered because going to war was more than hauling men, tanks, rifles, and ammunition to a designated site and attacking the enemy. The troops needed to come prepared for whatever they might find, which meant knowing everything they could about an area in advance.

The military searched their files for background materials. They found spotty reports scattered among files of government agencies but no comprehensive references that spanned the globe and nothing that left them with a sense of what to expect when they went to war. The years between World War I and World War II stretched across the lean budgets of the Depression years. The military had languished along with the rest of the country—training soldiers with Springfield rifles manufactured in 1903 and using borrowed cruise liners to transport troops. With Congress keeping the purse strings tight, there had been no money to spend gathering intel for wars that might pop up one day in some remote corner of the world. The file cabinets were all but empty. As one intelligence official summed it up, “We were caught so utterly unprepared.”

What would the armed forces do now to catch up in the midst of an ongoing war?

It was a problem that had vexed Roosevelt even before the war. To help remedy the intelligence gap, he had appointed General William Donovan in mid-1941 as coordinator of information, a role that morphed into the director of the Office of Strategic Services (OSS) during World War II. But Donovan too was getting a late start, and his mission was focused on espionage and sabotage, not foreign terrain.

The logical source of information for the military was its own intelligence agencies. The Office of Naval Intelligence (ONI), the Office of Strategic Services (OSS), the Army Corps of Engineers, and G-2, the army’s intelligence unit, had all started spinning out their own internal intelligence reports, duplicating effort and expense. But like jealous siblings guarding their toys, the agencies kept their reports to themselves, which only hampered preparations in the long run. Furthermore, these groups had not anticipated the massive landscape this war would cover and there were still many gaps to fill.

“Who would have thought, when Germany marched on Poland, that we would suddenly have to range our inquiries from the cryolite mines of Ivigtut, Greenland, to the guayule plants of Yucatan, Mexico; or from the twilight settlements of Kiska to the coral beaches of Guadalcanal. Who even thought we should be required to know (or indeed suspected that we did not know) everything about the beaches of France and the tides and currents of the English Channel,” a CIA official later mused.

That was exactly the problem: there was no predicting just what information might be needed in a war of global proportions. Whether it was knowing where to collect an essential mineral or finding the latest tidal data, the need for information, beyond just estimating enemy troop strength or weaponry, was enormous. The military leaders trying to plan the war—where to send troops first and what operations to execute when they got there—were particularly hindered. Their information needs were unfolding in real time, and without a centralized forum for gathering, collating, analyzing, and disseminating information, the United States found itself at a disadvantage in war planning.

Roosevelt began to realize the extent of the problem when he started meeting with Churchill and the British Chiefs of Staff in a series of war planning conferences. At the Arcadia Conference held two weeks after World War II began the British had the edge in strategic planning. They had operated under a system for almost two decades where the British Chiefs of Staff served as a supreme, unified command, reaping the benefits of cooperation between the Admiralty and the British Army. The United States had no such corresponding body.

Weeks after the first conference Roosevelt formed his own Joint Chiefs of Staff, a unified, high command in the United States composed of Admiral William D. Leahy, the president’s special military adviser; General George C. Marshall, chief of staff of the army; Admiral Ernest J. King, chief of Naval Operations and commander in chief of the U.S. Fleet; and General Henry H. Arnold, deputy army chief of staff for air and chief of the Army Air Corps. This impressive array of leaders could draw up battle plans, but it would take time to turn themselves into a truly cooperative body.

At the next war planning conference, at Casablanca in January 1943, Roosevelt noticed yet another fault in the American war planning apparatus—the information gap between the British and the Americans. No matter what subject came up in any corner of the world, the British had prepared a detailed analysis on the area at issue and pulled those reports out of their briefcases. The Americans weren’t able to produce a single study that could match the quality of the British reports, a failing that frustrated and embarrassed the president.

“We came, we listened and we were conquered,” Brigadier General Albert C. Wedemeyer, the army’s chief planner, shared with a colleague following the Casablanca Conference. “They had us on the defensive practically all the time.”

The British had a two-year start on the Americans in this war and they had learned the hard way about the need to collect reliable topographic intelligence. During the German invasion of Norway in 1940 the Royal Air Force Bomber Command had been forced to rely on a 1912 edition of a Baedeker’s travel guide for tourists as the sole reference in planning a counterattack. In the same offensive, the Royal Navy had only scanty Admiralty charts to guide an attack on a major port, an intelligence deficiency that could have easily doomed the mission. The British had gotten away with one in their Norway mission, but they knew they had to do better. 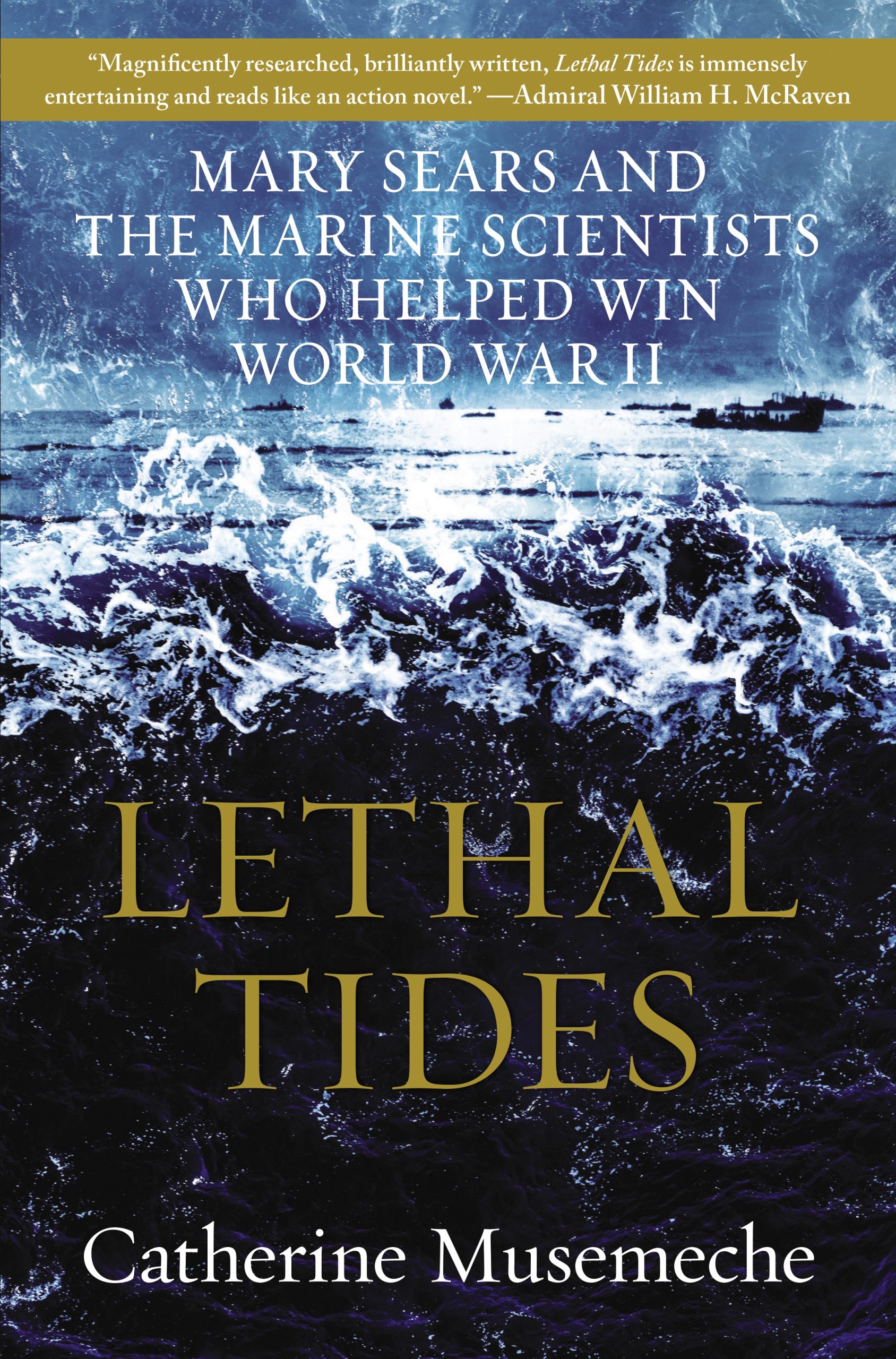