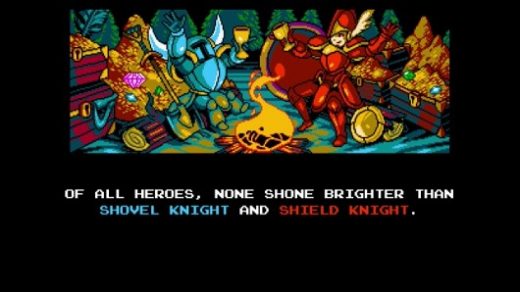 R. Mitchell
@TheRichardM
June 26th, 2014
Shovel Knight has my number. It’s laser-focused on children of the 8-bit era, blending elements of multiple games from Capcom’s halcyon days on the Nintendo Entertainment System. The most prominent influences are the Mega Man series and DuckTales, some of the best action platformers the NES had to offer. Like its forebears, Shovel Knight offers a demanding challenge with exact controls, presented with meticulous, evocative pixel art. In short, as an NES kid, I’m powerless to resist it.

Thankfully, the involving, split-second play that made those platforming staples so good still manages to excite, with or without the rose-tinted specs of nostalgia. Meanwhile, developer Yacht Club Games has thrown in a few modern touches that cater to today’s audiences, and it has managed to do so without sacrificing the (mostly) nail-biting difficulty that my fellow 8-bit curmudgeons expect.Shovel Knight‘s beginning plays out in typical 8-bit style, introducing us to its characters with vibrant pixel art storyboards set to exposition. We meet two renowned adventurers: Shovel Knight, a horned knight in blue who brandishes the mighty shovel blade, and Shield Knight, a knight in red who wields an enormous shield. As so often happens, the duo runs afoul of some evil magic, and Shield Knight is rudely sealed in a tower, leaving Shovel Knight to discover her fate and, if possible, rescue her. Standing in his way are the Enchantress and her Order of No Quarter (standing in for Dr. Wily and his Robot Masters, if you’d like to continue the Capcom analogy).

Shovel Knight has a few tools at his disposal during his 2D, side-scrolling journey. The most important of these is a literal tool, a shovel with a sword-like grip. The strange implement is surprisingly handy for cutting down foes, but Shovel Knight can also employ it for more terrestrial duties, like scooping up piles of earth-covered treasure and digging through massive dirt clods that bar his way. A horizontal swipe serves to both slash enemies and tunnel through soft soil. A jumping, downward thrust can also destroy clods, or it can hurt baddies while giving Shovel Knight a pogo stick boost (there’s your DuckTales infusion).

Using the shovel blade to damage enemies is satisfying, but it’s the odd weapon’s utilitarian functions that really make it fun. For example, the downward thrust to bounce off of enemies allows Shovel Knight to leap to areas that are normally out of reach. Similarly, a horizontal slash will destroy suspicious walls, revealing power-ups or granting access to secrets, including some of the game’s many useful pieces of permanent equipment.

Shovel Knight‘s levels do a good job of introducing new gadgets and platforming challenges, each feeling unique. These range from genre staples like conveyor belts to changing air currents and, my favorite, a Norse-inspired floating statue that spews out a solid (but temporary) rainbow bridge every time you thwack it. One level sees Shovel Knight knocking globs of green goo into pits of lava, briefly turning the deadly hot magma into bouncy flubber. In traditional 8-bit style, these concepts are intuitively communicated through gameplay design itself, no lengthy tutorials necessary. (Incidentally, Shovel Knight also never explicitly tells you that pressing down while jumping initiates the downward thrust, something new players might not immediately grasp.)

While Shovel Knight doesn’t coddle players with tutorials, it does make a few concessions to players who aren’t accustomed to the trial-and-error challenge of NES-era games. This is thanks largely to a brilliant checkpoint system. Each level has multiple checkpoints posts, each topped with glass orbs that ignite whenever Shovel Knight passes by. The brilliant bit: You can destroy these checkpoints. Doing so will release valuable treasure that can be used to buy equipment and upgrades, but it also renders the checkpoint useless. Shattering every checkpoint yields impressive profits, but it also means you’ll have to start at the very beginning of a level if you die. Shovel Knight loses a large percentage of his treasure upon death, so it’s a legitimately tough choice to make (though you can regain lost treasure if you survive the next time around). Trust me, it sucks to just barely graze a one-hit-kill spike right after you’ve crushed a level’s penultimate checkpoint.

The best part of the checkpoint system is its flexibility. You might be like me, for example, and want to destroy every single checkpoint, both increasing the challenge and your buying power. Or, also like me, you might get past a really difficult section of a level and decide to leave a checkpoint intact, ensuring you won’t have to replay that section if you die. It’s a great idea, accommodating all kinds of players.

Raising Shovel Knight further above its mechanical sturdiness and old-school toughness is a wonderful charm. Everything drips with it, from the goofy dialogue to the whimsically animated characters – in truth, probably more well-animated than a real NES game could allow. One of the townsfolk is dedicated solely to dishing out puns. The helpful Troupple King (half trout, half apple) is bizarre and hilarious. Even incidental animations are handled with aplomb. One of my personal favorites is the way that Shovel Knight rifles through treasure chests with his tiny legs dangling out.

The bosses, the nefarious knights of the Order of No Quarter, are just as charming, though some of them are a little on the easy side. Even so, each knight has plenty of personality – like Mole Knight, whose bulbous butt juts into the air as he digs underground – and that makes fights worthwhile. And, again, these battles are about as difficult as you want them to be. Using magic abilities, like the fireball-conjuring Flare Wand, can turn harder bosses into pushovers. If you crave heavier conflict, you can always avoid magic and stick to your trusty shovel blade. Also, dying against a boss is going to sting a lot more if you destroyed a level’s final checkpoint. (Related side note: There are plenty of achievements that reward such masochism.)

I’ll admit that my glasses are exceptionally rosy when it comes to the games that Shovel Knight is trying to emulate, but the point is that Shovel Knight goes beyond simply embodying the traits of its inspiration. It builds upon them, introducing us to an eccentric world that was clearly crafted with care. The rock-solid core mechanics are supplemented with vibrant art, intricate animation and odd, adorable little characters. Shovel Knight isn’t just inspired by 8-bit classics, it is inspired in and of itself.

And the puns, so many shovel puns. 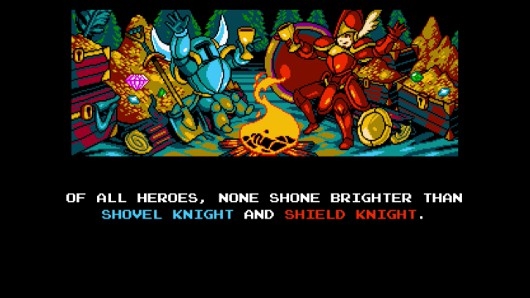