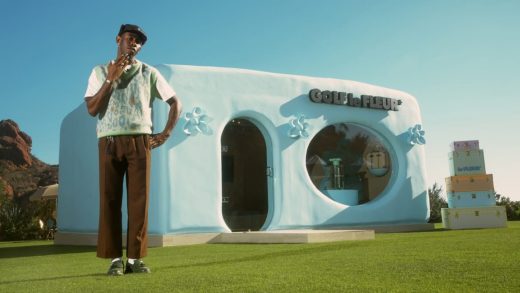 It’s a perfect day atop one of the countless hills of Malibu. The early-morning fog has given way to sunshine and a breeze whispering through coyote brush. It’s a vision I’m savoring when I hear the request blare over someone’s radio:

“Hey, can you send up some Rolls-Royces for people who need to move their cars?”

I’m visiting a wonderland built for the launch of Tyler “the Creator” Okonma’s new high-end clothing, fragrance, nail polish, and accessory line called Golf le Fleur. For the next week, a fleet of five Rolls-Royces will be chaperoning VIPs and invite-only shoppers up the bend to take their first look at the artisan goods in a Flintstones-style store floating in the sky. Nearby, you can see French café tables with chess boards for passing the time, a swing that lures you near the edge of a cliff, macaroons from Okonma’s favorite patisserie, even a coffee shop serving a drink he designed called, the Dog Baby—a name I suspect to be a saccharine allusion to his favorite YouTube clip.

But right now, an hour before the event’s soft open? Those Rolls-Royces will double as the world’s most regal shuttle buses for security, construction workers, and anyone else who needs to relocate their vehicle to the parking lot below.

Okonma, who Fast Company profiled in 2018, propelled to fame in his late teens as a creative core of the L.A.-based music collective Odd Future. In 2013, he launched the Golf Wang brand as an eccentric take on skate and streetwear, reflecting his personal style. But Okonma, 30, never left L.A. before the age of 19, and a decade of experiences later (along with a pair of number-one albums, a Grammy, and partnerships with Converse and Gucci), his tastes have evolved. Golf le Fleur mirrors his current, coiffed style. It includes mohair sweaters with tortoiseshell buttons, silk button-downs with rounded collars and screen-printing on the back, pleated pants designed to hang a bit short at your ankles, and furry ushanka hats. Subtle touches like flower buttons and wavy pockets soften the formality like a smile. Okonma has literally worn le Fleur samples to public events. (He previously released a few collaborations under the le Fleur moniker alongside Converse, Lacoste, and Jeni’s Splendid Ice Creams.)

When mulling the launch of le Fleur, Okonma was encouraged by his creative friends Dev Hynes, Solange, and the late Virgil Abloh. Abloh, in particular, was instrumental in setting him up with artisans in places like Paris and Italy, who could bring his visions to life with the finesse they required. The line couldn’t exist without Abloh, according to Okonma.

The pieces embody the globe-trotting mise en scène of his latest album Call Me If You Get Lost: They are born of Okonma’s imagination. Even this temporary rounded, blue building I’m standing in exists as a drawing in Okonma’s own notebook from 2019 with a near 1-to-1 accuracy—the only notable change is a single dip missing from the roofline due to construction limitations. Instead of background music, the space plays a one-and-a-half-hour-long loop of classic and deep-track musical performances he enjoyed during the design process.

“I didn’t want to play music. I would rather [feature] the live performances and stuff that I truly love that are so intertwined with making all of this,” says Okonma. “I wanted people to . . . hear the crowd, hear the different version of Stevie Wonder playing Do I Do in Brazil. Just random things. And when you look at [the Golf le Fleur collection], you feel or hear some of the things that was playing as I was coming up with it.”

As such, Okonma fairly bristles when the word “merch” casually slip from my lips as he tours me through the store filled with limited-run items. His “French Waltz” perfume is a rose-musk blend, which required a week of smelling in London to pin down. And a colorful $10,000 trunk he designed during the pandemic, in conjunction with the century-old British luggage brand Globe-Trotter, is anything but a lazy concert tee or Christmas tree ornament.

“Making that trunk, fuck, dude. From a business standpoint, it’s no profit,” says Okonma. “But I just wanted to see it exist, and I want people to be able to have it [who] are into that type of stuff.”

A pixelated, leopard-style print adorns many of the Golf le Fleur items. (Squint and you can actually read “Le Fleur” lurking in the white space.) A custom color Okonma dubs “Geneva Blue” will serve as the brand’s consistent baseline, while “Georgia Peach” offers a soft orange complement.

“I kind of design everything to kind of go with brown,” says Okonma. He doesn’t just mean to match brown as a textile. This line—despite being filled with old-world European craftsmanship—is meant to sing on brown skin.

Le Fleur will go on sale to the general public online on December 13, with prices ranging from around $30 to $10,000 (clothing items start at around $400). As for what the future of Golf le Fleur looks like, Okonma is excited, but also making zero promises. “This might last for a year. I might keep this going for 20,” he says. “I don’t know. Right now, it’s pretty much a fucking passion project, but I’m hyped. I’m super hyped.” 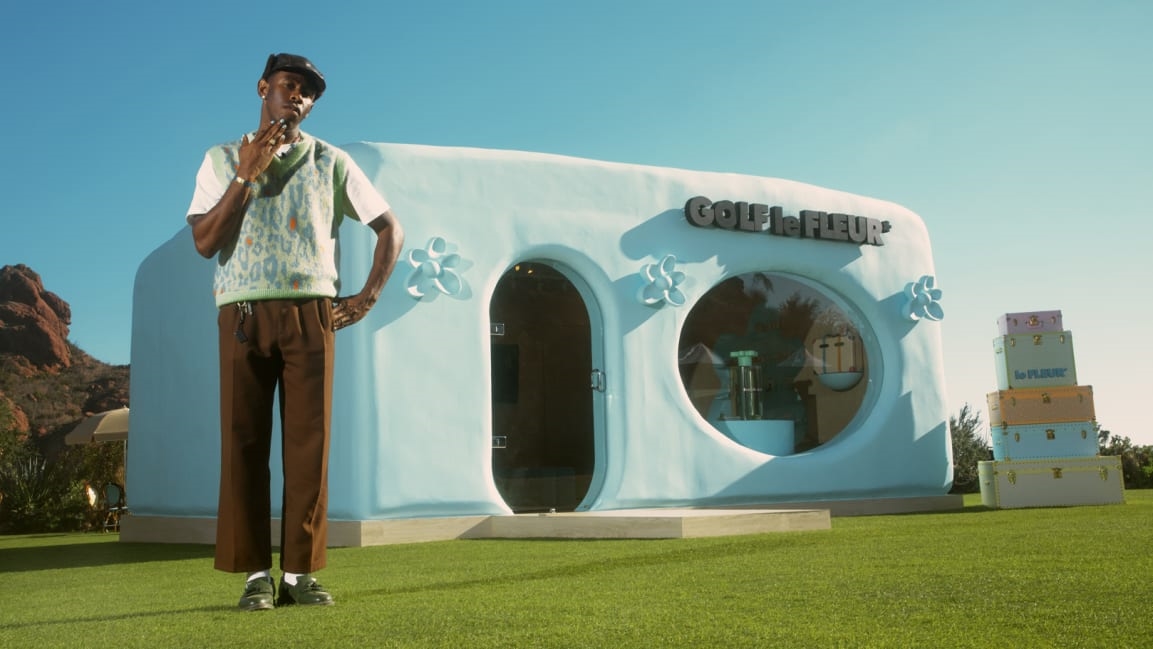