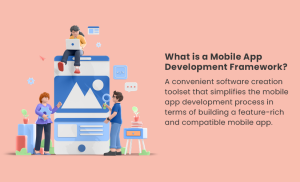 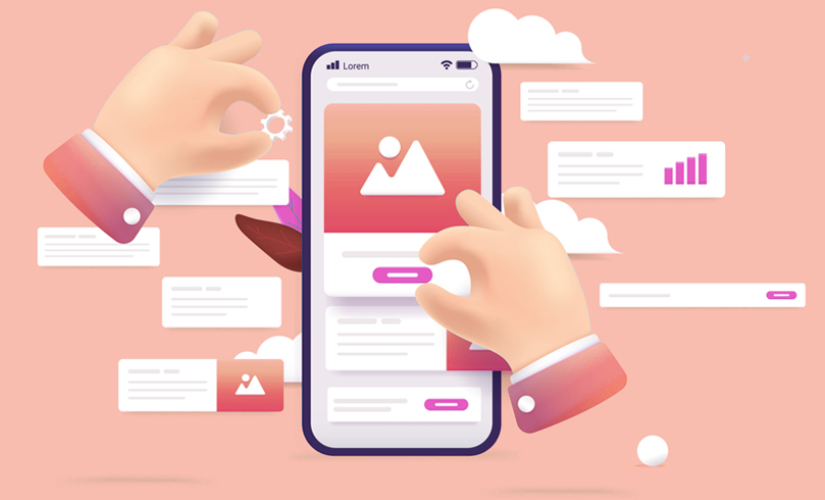 Mobile apps have become an inseparable part of the lives of people globally. This is something businesses have realized. They thus align themselves in the task of mobile app development. This is in the hope of getting an increased rate of customer engagement which would further their revenues in the long run.

However, when it comes to the mobile app development process, the steps are not so easy. It demands the use of the most robust set of frameworks.

Currently, with 2022 bringing its curtains to a general halt, these major frameworks have particularly captured the attention of developers globally. We will discuss them here.

Before that, it is important you know the meaning of mobile app development frameworks first.

What is Mobile App Development Framework?

Check out the image to get educated and get an insight into the meaning of the mobile app development framework.

The image above illustrates the definition of app development frameworks. In simple words, it is a software creation toolset that simplifies the mobile app development process in terms of building a feature-rich and compatible mobile app.

Significance of Using These Frameworks

Knowing the different advantages related to using mobile app development frameworks, let’s get an idea of the tools and SDK it empowers developers with.

Now you know the different subcategories into which these frameworks are divided about their advantages. Let’s give you an idea of the different frameworks. the 10 popular ones particularly.

Released in 2017 with its developers being the popular tech-giant Google, Flutter is known for its support in transforming the entire app development process alongside also assisting in the task of building, testing, and deploying apps for different platforms like the mobile, web, etc. This is through the utilization of a single codebase.

An open-source UI software framework whose creation was done by Meta in 2015, React Native is known for its support in creating truly native apps without compromising on the user experience. This is by providing developers with a core set of native platform compatibilities. Alongside these, it also assists in reducing the load time of the app without compromising on its quality or functionality at all.

Released in 2013 by Drifty, Ionic is known as the cross-platform app development leader. It also is known for its cutting-edge aid in developing progressive web apps. Being a complete open-source SDK, it makes it easy for developers to create flexible UIs for different app platforms using a single shared codebase.

An open-source platform, Xamarin makes it easy for developers to build native, cross-platform apps alongside a shared native user interface. It is also known for its ease of integration with backend services, components, etc. Finally, due to the aid in extending the .NET developer with tools and libraries, it is recommended to build different app types rather seamlessly.

Coming fifth in the category of top ten popular mobile app development frameworks is Apache Cordova. It helps in wrapping the HTML/JavaScript app into a native container to make it easy to access device functions of different platforms. Therefore writing one code so that it targets different phones and tablets becomes a cakewalk.

NativeScript is known for liberating the development process for developers. This is by giving them the flexibility to use platform APIs directly. Since its creation in 2014 until now it has been a favorite among developers due to allowing them to implement CSS and JavaScript so that users get a native experience while using it.

A popular cross-platform framework released in 2009, Corona is known for assisting development experts in creating apps and games for mobile devices as well as desktops. Alongside the support it provides developers in the quest of building cross-platform apps, it is also known for aiding them in avoiding paying extra for core functionalities.

A user-interface JavaScript library, Sencha Touch assists developers in making use of the cross-platform tools within to design, develop and test data-intensive web apps. Alongside the support it provides to build data-intensive web apps, it also aids them in the process of developing user interfaces that possess the look and feel of native apps.

Developed by Adobe and written in the JavaScript and Java programming languages, PhoneGap is an open-source framework that supports building applications that work smoothly on iOS and Android. Alongside the ease of app development, it also empowers developers with a container so that the native API gets bridged to the web view.

Onsen UI is an open-source UI framework written in JavaScript that helps developers in building mobile apps through technologies like CSS, HTML5, etc. Alongside the support listed above, it also provides developers with a set of tabs, side menus, etc., to make it easy to build HTML5 hybrid and mobile web apps.

Knowing now about these popular frameworks, you must be having some questions, one most prominent being- which one is worth using?

The answer to this, know all. This is because they have a significant role to play in the mobile app development process. Hence, regardless of changes, the relevance of these frameworks does not vanish at all.

It is however a good idea to keep some tips in mind before you go ahead using either of these frameworks during the app-building stage.

Tips to Remember before Using The Frameworks

With clarity of these aspects; you can go ahead and use it to your app’s advantage. This includes cross-platform app development too. This will ensure maximum user engagement apart from pouring revenues.

Reading the in-depth article you have an idea of the 10 popular app development frameworks that ease the overall mobile app development process. To nevertheless see your app getting success and allowing you to capitalize on profits, make the choice wisely.

Ankit Patel is a Sales/Marketing Head at XongoLab Technologies LLP and PeppyOcean, which are offering top-notch mobile app development services globally. As a hobby, he loves to write about new & upcoming technology, mobile & web, business & marketing, and more. His articles are seen on some of the great platforms like TechTarget, SmallBizDaily, JaxEnter, Social-Hire, TorqueMag and more.