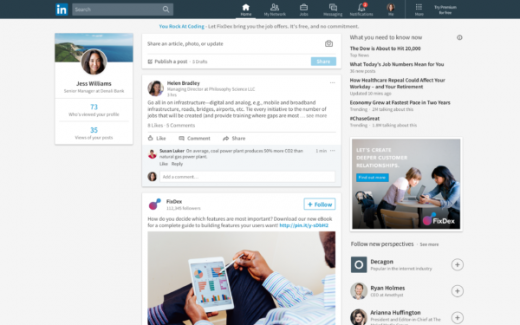 For many marketers, LinkedIn wasn’t seen as a primary lead generation tool. However, it seems that certain influencers have been able to gain a huge amount of traction on the platform’s feeds (anyone else seen a Gary Vaynerchuk LinkedIn post recently?)

It may be leading you to wonder if LinkedIn is a worthwhile channel to explore for your company. The answer is: maybe.

LinkedIn has a different kind of engagement and a different audience than other social media platforms. Additionally, users spend less time on LinkedIn than other platforms, so you have less of a window to make an impression.

This infographic from SocialPilot breaks down the potential behind LinkedIn’s audience and traffic:

Content marketers can use LinkedIn’s publishing feature to write and publish articles to your feed that your followers can like, comment on and share. LinkedIn’s engagement has increased year by year – so much so that LinkedIn launched a ‘Water Cooler’ report on its blog to show its most popular posts that month.

1. Use an Eye-Catching Header

People see endless streams of content each day on LinkedIn, headline matters because can either bring their attention to your article or get lost as they scrolling through. Have you noticed that the posts you tend to click on in LinkedIn have a little more urgency, drama or name-dropping than on other platforms?

You’re not the only one. Posts on LinkedIn that have a little (but not too much) flair and a heightened sense of urgency tend to get more clicks.

Check out Brigette Hyacinth’s article page on LinkedIn for a perfect example of this. Consistently one of the highest-read authors on the platform, Hyacinth doesn’t shy away from attention-grabbing headlines, exclamation marks or inciting emotion in her audience. Quite the opposite!

Hyacinth highlights what LinkedIn’s content is about – it isn’t asking for high-brow editorial work or Pulitzer-prize winning photography. Rather, it is a hub where people are discussing the real hot-button issues in the workplace today, and the big names that are making waves in the industry.

Evergreen articles and thought pieces work less well on LinkedIn than other places. Rather, what gets clicks are work-related trending topics: discussions about building remote teams, leadership and the fad of open office plans, for example. People aren’t on LinkedIn to look for general reading or op-eds about the pros and cons of social media or anyone’s political leanings.

3. Focus on Your Audience’s Career, Not Your Company’s Achievements.

LinkedIn may be more professional-oriented than others, but make no mistake: it is still a social media platform. 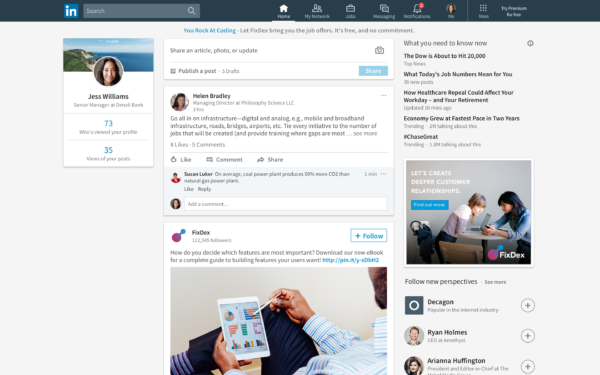 LinkedIn was built as a networking and recruitment tool. Users don’t go there to shop or browse; rather, they’re there to connect on a different level. They’re there to level up their skills, investigate companies they’re interested in working for or with, or network with organizations they see as sharing similar goals, ideas or interests.

LinkedIn content is mainly for brand awareness, thought leadership, and opening opportunities,but it’s not necessarily going to be where you close your sales.

Rather, it’s a place to demonstrate your knowledge about current work practices and offer opportunities that will help people grow in their careers, like webinars, courses or discussion groups.

However, take a look at the posts of the biggest influencers on LinkedIn. Even the most massive names are working with smaller numbers in their replies and comments, but much deeper and more thoughtful engagement.

With LinkedIn, as with networking, sometimes the quality of the relationships you’re building outweighs quantity. If your business can benefit from the in-depth engagement with the kind of professionals who are seeking content on LinkedIn, it’s worth exploring adding the channel to your marketing mix.

These tips are simple and straightforward but applied correctly, should help skyrocket your LinkedIn engagement.