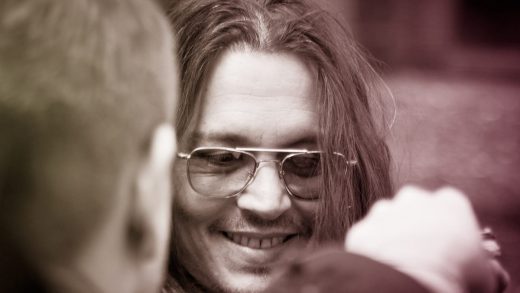 “There is not a fucking soul that wants to see Captain Jack Sparrow sad,” Johnny Depp says at one point in a morbid, mind-boggling Rolling Stone profile released on Thursday. He’s criticizing the writers of his long-in-the-wooden-tooth Pirates of the Caribbean franchise when he says it. He almost certainly doesn’t realize the irony that this observation comes in the middle of an extended interview that presents Depp himself as far sadder than Captain Jack Sparrow would ever be permitted to appear on film.

Stephen Rodrick’s profile confirms something many have suspected: Depp is spiraling right now. His public appearances recently have given fans reason to speculate about his physical health, while his near-total absence from the Fantastic Beasts sequel’s trailer makes it appear as though movie studios may not be as ecstatic as they once were about being associated with the actor. According to the profile, things are even bleaker than they seem.

The interview is the result of Depp’s lawyer, Adam Waldman, contacting Rolling Stone about writing a story on “the injustice being done to Depp’s reputation and bottom line.” Given that intention, the piece is an abject failure. As a rubberneck-y peek into the unraveling life of an erstwhile Hollywood icon, though, it is an astounding success. Over the course of 72 hazy hours spent in a 10,500-square-foot rented mansion in London’s Highgate neighborhood, Roderick got a close-up look at Depp’s beyond-precarious financial situation, habitual drug use, and cosmically scarred psyche.

Although the only thing left undiscussed is the topic many readers might be most interested in–the NDA-protected details of his divorce from actor Amber Heard–the profile is chockablock with stunning revelations and gory details. Here are nine of the most surprising.

The major thrust of the piece is a thorough accounting of Depp’s break with his former management and his dire financial straits. A quick overview: “It’s estimated that Depp has made $650 million on films that netted $3.6 billion. Almost all of it is gone. He’s suing The Management Group, run by his longtime business manager, Joel Mandel, and his brother Robert for negligence, breach of fiduciary duty and fraud. The suit cites, among other things, that under TMG’s watch Depp’s sister Christi was given $7 million and his assistant, Nathan Holmes, $750,000, without his knowledge, and that he has paid the IRS more than $5.6 million in late fees . . . The suit seeks more than $25 million from TMG, accounting for ‘tens of millions’ it claims TMG illegally took for its commission, plus any additional damages the court sees fit. The Mandels categorically deny all wrongdoing and are countersuing, alleging that Depp breached his oral contract with the company.”

Johnny Depp is a compulsive spender

At the height of his $30 million Pirates paydays, Depp spent $75 million for 14 residences, $3 million to shoot his pal Hunter S. Thompson’s ashes into the sky from a cannon, bought at least 70 guitars and 200 pieces of art, owned 45 luxury vehicles, spent $200,000 a month on private air travel, and rented 12 storage facilities for his Hollywood memorabilia. He also apparently spends a lot on wine, as is noted in the TMG lawsuit.

Rodrick writes in the piece that although Depp is good friends with Marilyn Manson, his closest confidant seems to be his lawyer, Waldman. At various points, Depp laments the passing of friends like Tom Petty and Hunter S. Thompson, along with his mother, who died in 2016. Depp also has had a falling out with his sister. As Roderick notes, “One of the most famous actors in the world is now smoking dope with a writer and his lawyer while his cook makes dinner and his bodyguards watch television. There is no one around him who isn’t getting paid.”

Depp’s musings at humor in the article reveal him to be one of those people who considers so-called PC culture the bane of society. When he mentions that Don Rickles was “the bravest comedian ever,” Depp backs it up by playing a clip of Rickles making a racist joke about boxer Sugar Ray Robinson many decades ago. As Roderick writes, “Depp insists it’s ballsy, not offensive. I mumble, ‘I don’t know about that.’ Depp isn’t paying attention.”

Later in the profile, the subject of Harvey Weinstein comes up and Depp calls him an asshole . . . “for burying his film Dead Man because director Jim Jarmusch refused to give up his contractually mandated final cut.”

His further thoughts on Weinstein don’t help matters much: “‘He was a bully,’ says Depp. ‘Have you seen his wife? It’s not a wide range. It’s not like he went, “I must go to the Poconos to find some hairy-backed bitch.”‘

Depp than apparently worries about whether he is being too unkind (to Weinstein!!!) and shares an anecdote about Weinstein not being an asshole to his kid.

At last year’s Glastonbury Festival, Depp famously said “Can we bring Trump here? . . . When was the last time an actor assassinated a president?” Depp took a beating in the press over it, although obviously not as bad as the one Kath Griffin incurred. As Depp explains it here, though: “I was trying to connect it to Trump saying he could shoot someone on Fifth Avenue, but it didn’t come out right.” The explanation actually does add some useful context, even if the joke did fail in execution.

It had long been cited as a symptom of Depp’s decline that he has recently taken to having his lines fed through an earpiece on set, though the actor never confirmed as much until now. The lawsuit against him alleges that Depp kept a sound engineer on the payroll for this reason and Depp admits it, claiming the process helped him with face-acting.

“I’ve got bagpipes, a baby crying, and bombs going off,” says Depp. “It creates a truth. Some of my biggest heroes were in silent film . . . It had to be behind the eyes. And my feeling is, that if there’s no truth behind the eyes, doesn’t matter what the fucking words are.”

Johnny Depp is brazen about his drug use

The entire interview takes place between ever-present hash joints, as Depp recounts how much fun he had taking whatever drugs he could get his hands on with Hunter S. Thompson.

“Depp is evangelical in the uses of narcotics and thinks they could have expedited the capture of Osama bin Laden,” the profile describes. “‘You get a bunch of fucking planes, big fucking planes that spray shit, and you drop LSD 25,’ Depp says. ‘You saturate the fucking place. Every single thing will walk out of their cave smiling, happy.’”

When Roderick wants to go back to his hotel to shower and change his underwear, Depp counters thusly: “‘That’s why I always wear two pairs,’ says Depp with a smile. ‘Matter of fact, I’m wearing six condoms right now.’ I laugh, which seemingly encourages him: ‘I also have a dental dam if you need one.’”

It was in the early days of his acting career, while living with a few roommates in an L.A. flophouse. After a late night of partying in a disgusting hotel, Depp returned home and promptly spread his newly acquired crabs to his roommates.

“‘They look like crab-crabs, like from the sea.’ He laughs a bit. ‘I gave everyone scabies,’ says Depp, taking another drag on a cigarette. ‘You know how hard it is to tell your roommates that?’ He puts on a voice that sounds like Kramer from Seinfeld: ‘”Uh, I got scabies from a hotel room, I swear. Sorry, dude.’” 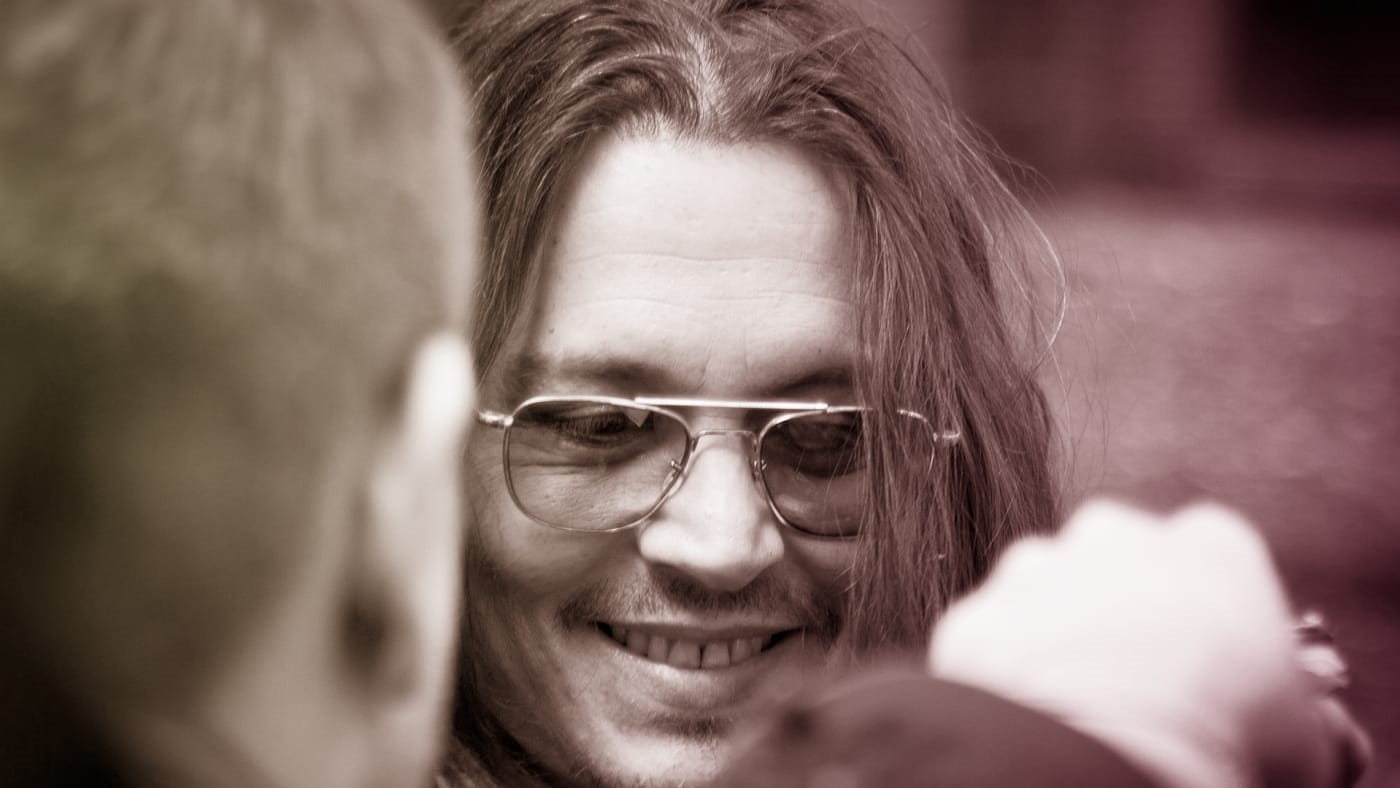