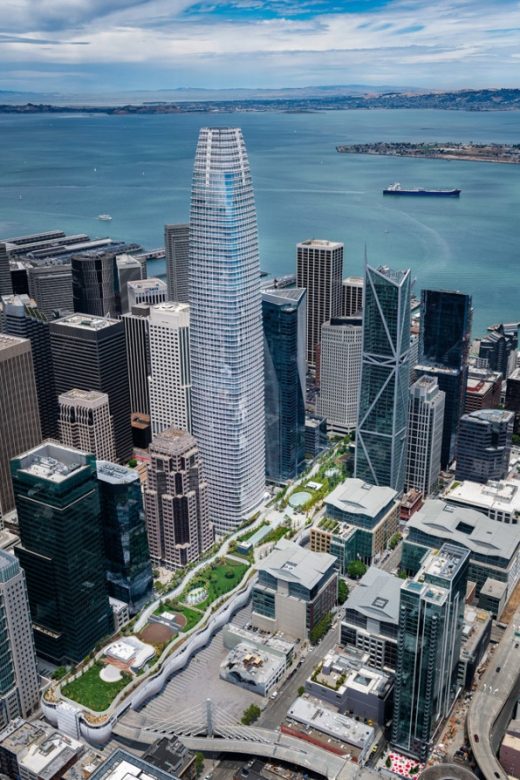 After more than a decade of planning, the first stage of San Francisco’s new transit hub is almost complete. The new Pelli Clarke Pelli Architects-designed Salesforce Transit Center, which spans several blocks in downtown San Francisco, will bring together 11 bus lines and eventually trains from around the Bay Area, organizing the city’s sprawling public transportation system. But all attention over the weekend was on the hub’s rooftop park, which opened to the public August 11.

The 5.4-acre Salesforce Transit Center Park, which occupies the entire roof of the transit center, is one of the largest stretches of greenery to open in San Francisco in years. It brings much-needed public, open space to a newly named neighborhood called the East Cut, a dense, heavily commercial area of the city that has few parks. The park has a public plaza that also connects via a skybridge to the fifth floor of the Salesforce Tower next door, along with an amphitheater, lawns, and botanical gardens.

Designed by PWP Landscape Architecture, which codesigned the 9/11 memorial plaza in New York, the park is similar to a number of other urban parks that seek to use green space to offset the carbon footprint of their cities and make them more livable. But this park is unique for effecting more sweeping change. When PWP Landscape Architecture won the design competition in 2007, the firm proposed using gray water from an accompanying skyscraper to irrigate the entire park by cleaning it through a wetland garden. At the time, this was against plumbing code in San Francisco: Gray water was not legal to use in any commercial projects. But PWP Landscape Architecture, Pelli Clarke Pelli, and several other collaborators worked with the San Francisco Public Utilities Commission to successfully change the rules by pointing to Berkeley across the bay, which already allowed the use of gray water in residential projects. The transit hub park opened the floodgates for other commercial projects to use gray water.

Paradoxically, because the skyscraper (now Salesforce Tower) and transit hub became separate projects with different timelines after PWP Landscape Architecture won the competition, the landscape architects weren’t able to use gray water to irrigate the entire park. Instead, gray water from the sinks in the transit center will be cycled up to the park’s wetland garden, which will filter the water. The cleaned water will then be reused in the center’s toilets. “The exciting thing was that an aspirational idea in a design competition–though it wasn’t feasible right when we won the competition–became something that is realizable today,” says Adam Greenspan, a landscape architect who worked on the project. “Rather than being just a place where buses that have exhaust come, this [is] a living green space that captures and detains storm water.”

The park is also designed to be a social hub for residents and visitors. Because the park stretches over multiple blocks and is only about 150 feet wide, or the width of a football field, Greenspan intentionally designed it so that each subsection of the park acts like a mini neighborhood park for the surrounding area: There’s an open plaza that connects to the Salesforce Tower, an amphitheater, a lawn, and botanical gardens with plants native to California, as well as the wetlands garden, a desert garden, and a Mediterranean garden.

The rooftop will be patrolled by security and closed at night–which is meant to keep the park clean in an area that’s often overrun by homeless people. After all, Salesforce paid $110 million to have its name on the transit center, even if it is a public space. An estimated $1.5 million per year will be spent on maintaining the park’s tranquility in the heart of San Francisco. 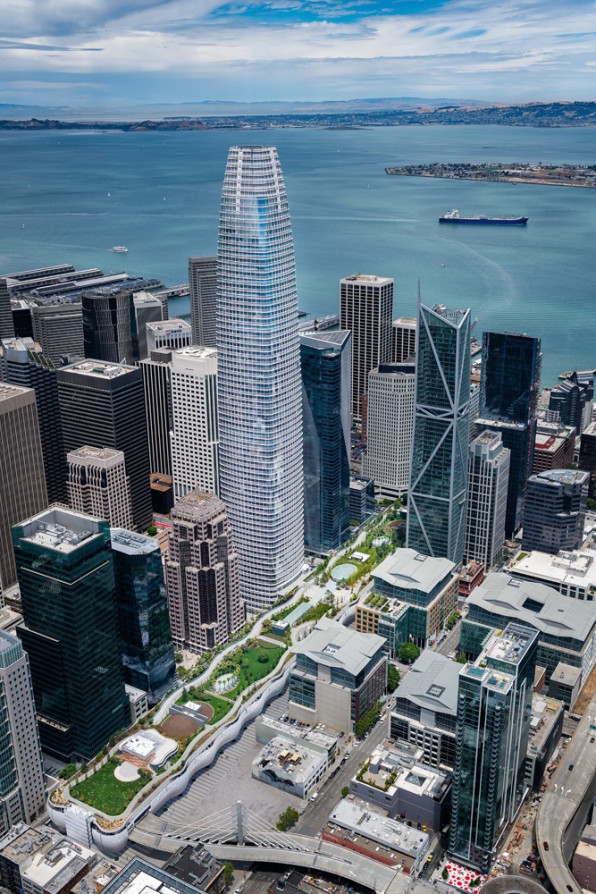