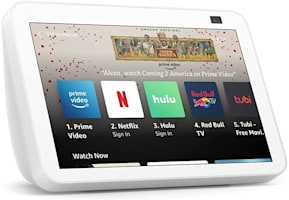 Echo Show 8 and Show 5 review: Not much has changed, and that’s okay

The Show 8, however, is now much better at video calls.

N. Lee
@nicole
June 29th, 2021
All products recommended by Engadget are selected by our editorial team, independent of our parent company. Some of our stories include affiliate links. If you buy something through one of these links, we may earn an affiliate commission.

I’ll admit, I wasn’t impressed when Amazon added a rotating base to the new Echo Show 10. Sure, the swiveling screen is useful for following you around the room during video calls, but it also felt gimmicky and unnecessary. Plus, it needs a lot of room to move around so you’re losing a significant amount of counter space. That’s why I’m glad the Echo Show 8 and 5 haven’t repeated that design. In fact, Amazon has changed very little between this edition and the last, but trust me when I say that’s a good thing.

It’s the Echo Show 8 that has seen the most changes, but most of those are under the hood: It now has a faster octa-core processor plus a much-improved 13-megapixel wide-angle camera (the previous model only had a 1-megapixel sensor). Plus, the Echo Show 8 can follow you during video calls without the need for a swiveling display. Instead, it uses digital panning and zooming, the same tech you’ll find in Facebook’s Portal devices (plus the Echo Show 10, when it’s not moving around). 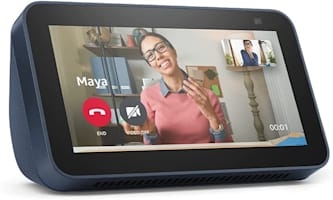 This digital pan-and-zoom works well enough that I feel like there’s a cameraperson keeping my face in frame during video calls, tracking me as I move across my living room. This face-tracking feature works on every video calling platform that the Echo Show 8 supports, which includes Skype and Zoom, in addition to Amazon’s own services. (You can make video calls via the Alexa app or from Echo Show devices.) I found the video and audio quality to be generally quite good. That said, the auto-framing can be a touch glitchy; it sometimes takes a few seconds for it to kick in. Facebook’s Portal does a comparatively better job at this sort of automatic tracking, with hardly any lag.

The Show 5, on the other hand, only brings minor changes. It now has a 2-megapixel camera, up from one megapixel, which is still pretty meager. And it comes in a light blue color in addition to the usual black or white. Its camera does not have the pan-and-zoom capabilities of the Echo Show 8, probably thanks to its significantly lower resolution. Notably, the Show 5 currently does not support Zoom. (Amazon has said that it’s working with Zoom to roll out support to more devices, so this could change.)

The rest of this review might seem like deja vu, as everything else here is very similar to previous generations. Both devices have the same minimalist design. The Echo Show 8 has a 1,280 x 800 resolution while the Show 5 settles for 960 x 480. Photos and video look good on both, though I do prefer watching videos on the Show 8 simply because the screen is bigger. Both the Echo Show 8 and 5 also have an ambient light sensor, which adjusts the screen’s brightness and color temperature according to their surroundings.

On top of both the Echo Show 8 and 5 are volume controls, a microphone mute button, plus a camera shutter for privacy. The Show 8 has a better sound system than its smaller sibling, with two speakers instead of one. It delivers surprisingly powerful bass and impressive volume, easily filling my small office. The audio from the Show 5 isn’t too bad for its size, but it just doesn’t sound as good. I should note that both the new Echo Show 8 and Echo Show 5 lack the 3.5mm headphone jack featured on their respective predecessors, which means you can’t attach them to larger speakers.

Both the Echo Show 8 and 5 have a sunrise alarm feature, which slowly brightens up the display to mimic daylight’s arrival. However, the Show 5 is the only one that lets you tap the top to snooze. This is likely because Amazon is marketing the Show 5 as an alarm clock designed to be on your nightstand, while the Show 8 is meant more for the living room or the kitchen.

Like the new Echo Show 10, the two smart displays have Amazon’s updated home screen, which features multiple cards that let you view several topics at once, such as weather and sports next to each other. It’s contextual to the time of day as well; I saw the latest headlines during the day, for example, while at night I noticed a suggestion for a relaxing songs playlist. I like this mix of rotating screens a lot; it’s one reason why smart displays are a lot more useful than, say, a smart speaker. You can get a glance of information passively, without having to actively ask for it.

Using the Show 8 on my computer desk is a treat as well; it’s great as a digital photo frame and it displays the current time and weather conditions as well. I also found it useful in the kitchen, since it has access to a large library of recipes from sources like Food Network and Allrecipes; I can say “Alexa, how do I make chicken noodle soup?” to bring up a list of relevant results. All of the recipes have step-by-step cooking directions; some even have accompanying photos and videos for additional guidance.

The Show 5 fits better on my bedside table. Of course, it works just fine in other areas of the home as well, but its smaller size makes it best suited as an alarm clock. That said, I’m not entirely comfortable with having devices with cameras in the bedroom (even if there is a privacy lens cover). One of the reasons I think Google’s Nest Hub and Lenovo’s Smart Clock make for ideal alarm clocks is that they don’t have cameras at all, which helps allay at least some privacy concerns.

The Echo Show 8 and 5 offer easy access to smart home controls, which you can use to adjust the temperature of your smart thermostat, control Philips Hue lights and more. As you might expect, these Echo Show displays are especially useful if you’re a frequent Amazon shopper. Adding items to your shopping cart is as easy as telling Alexa to do so. Plus, it shows a reminder when a Subscribe & Save order is about to ship, which helps avoid surprise packages.

I didn’t get a chance to test it, but it’s also worth noting that the Echo Show 5 is available in a Kids Edition, which comes with a year’s subscription to Amazon’s Kids Plus. It features a child-friendly home screen and a two-year guarantee against damage. Also important: It lets parents control the content and features children have access to.

The closest competition to both Amazon smart displays is Google’s second-generation Nest Hub, which has a 7-inch display. It retails for $100 — a little cheaper than the Echo Show 8 ($130) and a little pricier than the Echo Show 5 ($85), but it also offers slightly different features. The Nest Hub is better for those who prefer Google Assistant to Alexa, and it also offers more video streaming options. I also tend to prefer the Google smart display software, as it’s more visually appealing and intuitive than Amazon’s. It doesn’t have a camera so you’ll miss out on video calls and the speaker system isn’t as good.

Fundamentally, however, it’s not the hardware that will dictate which smart display you buy as much as which tech giant’s ecosystem you want to be a part of. If you already have Nest home devices and you want YouTube integration, you’re much better off with a Nest Hub. But if you’re already an Alexa user, an Echo Show would be a better option.

As for which Echo Show you should pick, the Echo Show 8 delivers the most value for the money. Compared with the Echo Show 5, it has a bigger display and superior audio, which is more than worth the extra $45. And it has the same auto-framing camera as the much more expensive Echo Show 10 (even if it lacks the rotating display). If, however, you don’t care much about video calls, and prefer one that doubles as an alarm clock, the smaller Echo Show 5 could be the better bet.