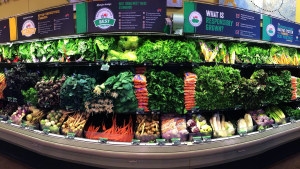 Amazon is nudging Whole Foods a little closer to half paycheck

That didn’t take very long: After quick regulatory approval of Amazon’s $13.4 billion Whole Foods acquisition, the grocery store said in a statement this morning that it will start slashing prices on Monday.

To no one’s surprise, the deal will also help the commerce giant capitalize on Whole Foods’ precious real estate, and bring a closer tie-up between the two companies’ businesses—another sign of Amazon’s many-tentacled ambitions.

The quick approval by the feds was surprising to some, given, among other things, what the president has said about Amazon and that the FTC was just a month ago reported to be investigating worries that the merger would hurt competition in the grocery market and negatively impact access to grocery stores in poor neighborhoods where healthy choices are already harder to come by.

Among the many changes the merger now seems certain to usher in: That old suburban joke, about Whole Foods being “more like Whole Paycheck,” just won’t have quite the same meaning anymore.