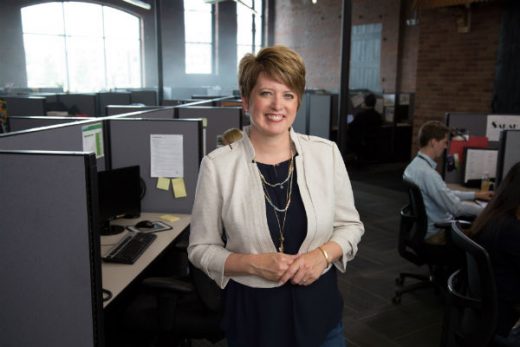 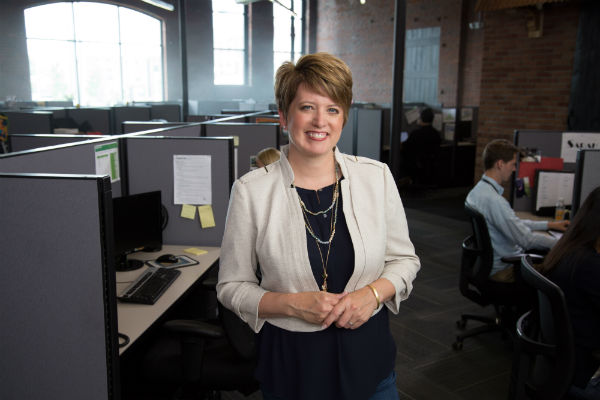 Two days after Angie Hicks, the co-founder and chief marketing officer of home services website Angie’s List, won an award for being a trailblazer in Indiana’s technology sector, her company announced it is heading down a new path. Angie’s List has agreed to be sold to Internet giant IAC, which will merge Hicks’s firm with another company IAC owns, HomeAdvisor, the Golden, CO-based online service for home remodel and repair.

The deal is valued at more than $500 million. The combined company will be called ANGI Homeservices and is going to be headquartered in Golden. In a press release announcing the deal, IAC (NASDAQ: IAC) didn’t say whether it would maintain the Angie’s List operations in Indianapolis. The company is seen as one of the anchors of Indiana’s tech sector, something Hicks noted during an interview with Xconomy in April, before the deal was announced. She spoke positively about the trajectory of Indiana’s startup cluster.

“There’s a really neat environment around startups these days, and I’m anxious to see how the next generation of companies start to define Indianapolis, in particular,” Hicks said in the April interview with Xconomy’s Sarah Schmid Stevenson.

IAC is paying $8.50 per share for Angie’s List (NASDAQ: ANGI), giving the deal a value of around $507.5 million based on about 59.7 million outstanding shares, though the amount of cash available in the acquisition is capped at $130 million, according to a prepared statement. (Angie’s List shareholders can either take one share in the new company’s Class A common stock or the $8.50 buyout.)

Angie’s List rejected a previous offer from IAC for $512 million in November 2015, shortly after Scott Durchslag took over as president and CEO. But this bid passed muster—the boards of both companies have approved the deal, which is expected to close by the end of the year.

HomeAdvisor CEO Chris Terrill is going to run ANGI Homeservices, and Hicks is expected to join the board of directors, according to the statement. It didn’t mention what’s next for Durchslag, but Bloomberg reported he will stay on at least through the closing of the transaction.

Founded in 1995, HomeAdvisor is an online marketplace where homeowners can search for and hire professionals to handle home repair, maintenance, and improvement projects. IAC executives think 22-year-old Angie’s List will benefit from HomeAdvisor’s instant connecting and booking technology, and its ability to drive sales, according to the statement.

Angie’s List removed a $20-per-year user fee in 2015 as it tried to claim a greater portion of real-time bookings and online payments in the services industry, as Xconomy reported last year. The company offers ratings and reviews for service providers from plumbers to dog walkers, and while it now lets people look at reviews for free, customers have to pay premiums for advanced features, such as interacting with the providers.

The company reported a $7.9 million net loss in 2016, after showing its first profit of $10.2 million in 2015. Revenue from both members and service providers declined. The company’s stock price has been sliding in recent months, but it has jumped on news of the acquisition. The stock is currently trading at $9.41 per share, up from $5.89 at Monday’s close.

IAC owns a variety of other consumer websites, including Vimeo, Dictionary.com, Investopedia, and dating services Match, Tinder, and OkCupid.

“We love these category leaders in big consumer verticals where we can ride an obvious offline to online migration with winning products and multiple brands,” IAC CEO Joey Levin said in the prepared statement. Levin is becoming chairman of the ANGI Homeservices board. “We did it in dating, travel, and ticketing, and we expect we’ll do the same with home services.”

David Holley is Xconomy’s national correspondent based in Austin, TX. You can reach him at dholley@xconomy.com Follow @xconholley