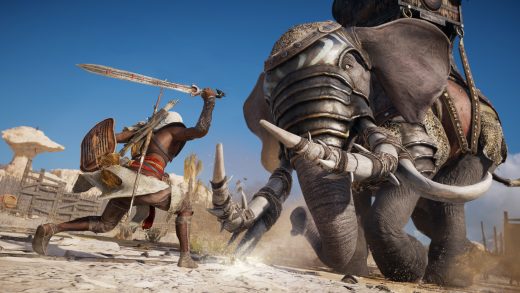 Assassin’s Creed Origins – Stealth, Freedom of Choice, and a Lost City in the Desert

Assassin’s Creed Origins – Stealth, Freedom of Choice, and a Lost City in the Desert

In what might be a series first, Assassin’s Creed Origins pushed me to use all of the tactics at my disposal, without any prodding from the story or mission guidelines. This happened during my latest hands-on session with the game (set in the Nile Delta and Giza Plateau), somewhere around my fourth attempt to free Ghupa, an old man caged at the center of a hilltop camp. Ghupa had been kidnapped after asking too many questions about a shadowy villain known as the Scarab, a member of the mysterious Order of the Ancients whose preferred method of killing involved burying people up to their necks in the desert and leaving them to die. This fate hadn’t yet befallen Ghupa, but for now he was surrounded by a generous handful of guards – all of whom, being several levels above me, could annihilate Bayek without much effort.

I tried storming in and attacking the guards directly. That failed, so I took up a nearby perch and fired remotely guided predator arrows into their heads from hiding. On my next try, I smashed open the cages of captive lions, freeing them to attack the guards for me. The following run saw me hiding in the bushes and trying to stealth-kill my enemies – which, given that I hadn’t yet upgraded Bayek’s Hidden Blade, only wounded one guard before the rest spotted me.

All of these attempts were carried out in broad daylight, and they all ended with Bayek fleeing the area with next to zero health and getting stabbed by a pursuer. Then I tried a new tactic: I found a hiding spot, and with a button press, I passed time until nightfall and watched as the moon rose rapidly over the desert landscape. Then I crept through the underbrush and threw a couple of sleeping darts at the only two guards who had a clear line of sight to the cage. This only knocked them out for a few seconds, but that was more than enough time to open the door, sling the old man over Bayek’s shoulder, and flee into the night before anyone raised an alarm. It was only a small step in the journey that is Assassin’s Creed Origins, but it was as satisfying as any heist.

A New Bag of Ancient Tricks

Moments like these are a big part of what make the free-form gameplay of Assassin’s Creed Origins so compelling. Each mission gives you a set of objectives, and it’s up to you to decide which of your varied tools and tactics to use to achieve them. Sometimes, though, you’re going to encounter enemies that can cut you down with one swing of their axe – and while you’re free to put a mission on hold until you’ve leveled up enough to come back and tear through the opposition, sometimes it’s more fun to find a less-direct method. 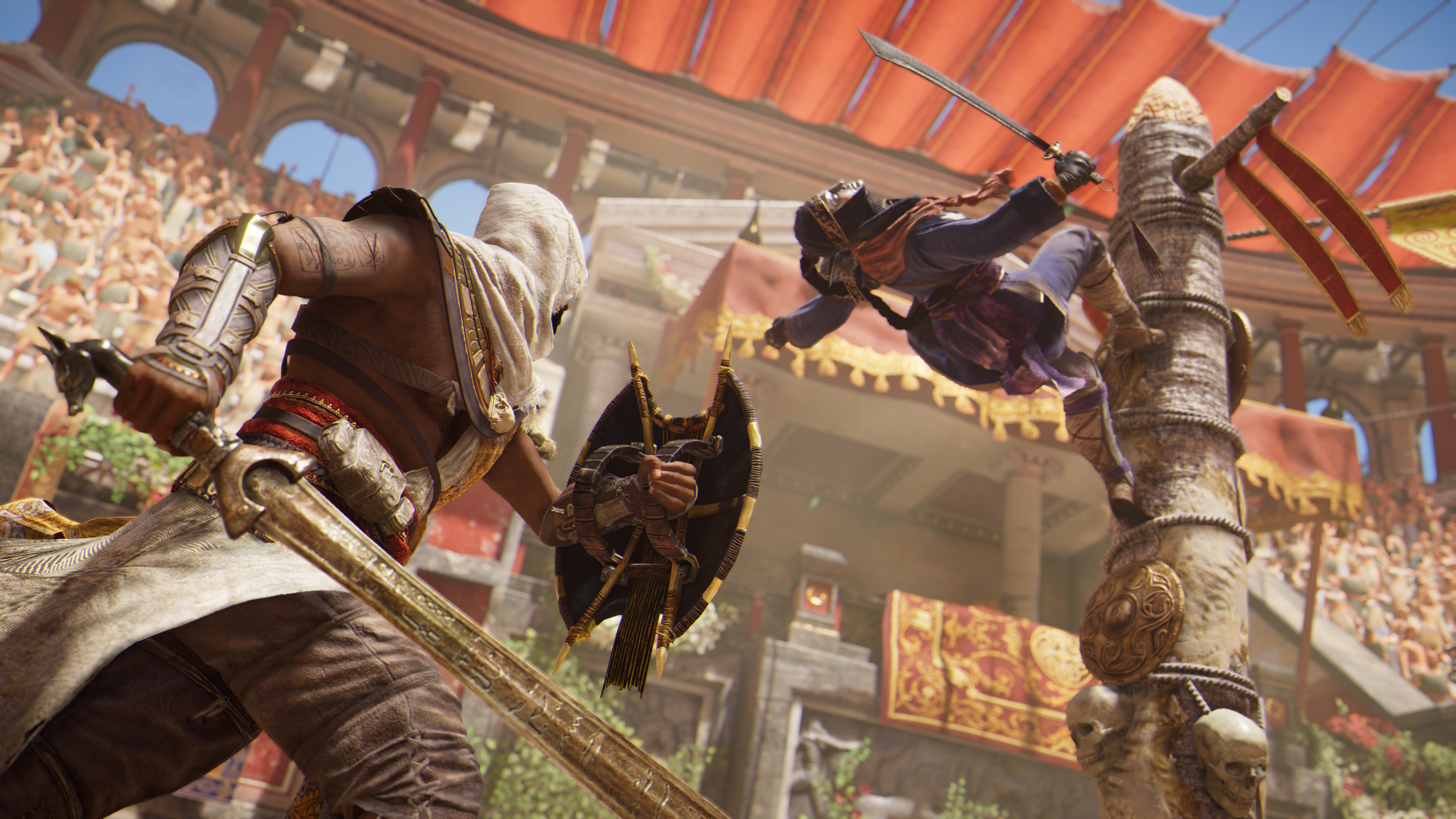 If you like doing things quietly, stealth assassinations are still a quick way to take down enemies, so long as you’ve upgraded your Hidden Blade enough to do the necessary damage. Sniping enemies from a distance with Bayek’s arsenal of bows can also thin their ranks quickly, and you’ll even get a preview of how much damage a shot will do while you’re aiming – so if stealth is the goal, maybe don’t take the shot unless it’ll drop your target in one hit. Once you’ve whittled your foes down to a manageable number, you can wade in and confront your enemies directly, using a variety of weapons suited to different tactics; swinging a spear is an excellent crowd-control measure, while rapidly striking and dodging with twin blades lets you outmaneuver slower enemies.

Your path for quelling these threats isn’t as direct as it was in previous games, either. You’ll be directed to informants who will give you handfuls of quests related to the central story, but I also found plenty of new tasks by just wandering around the world. That was the case when I passed an old couple weeping by the side of the road, who asked me to retrieve the bodies of workers from a field overrun by murderous hippos. (This was also a good opportunity to practice pure stealth, as the field was full of high stalks and the hippos were tough.)

“I slung the old man over Bayek’s shoulder and fled into the night before anyone raised an alarm. It was only a small step in the journey, but it was as satisfying as any heist.”

This turned out to be more than a single-objective task; after failing to find the body of the couple’s protector, Meketre, I tracked him to a hidden den of a bandit gang, who’d captured him while the hippos were running loose. Then, with Meketre’s help, I rode back to his village and fended off a nighttime raid by those same bandits. The mission was typical of the side quests scattered throughout the world, which tend to start with simple tasks and quickly spiral into something greater, but through it all I kept hearing one word that convinced me to ride out into the desert: Letopolis.

Letopolis turned out to be the highlight of the preview session. A lost city that was being reclaimed thanks to the efforts of Taharqa, Ghupa’s son-in-law, Letopolis was a grand place in spite of its inhospitable surroundings, with massive stone edifices and gleaming villas that had been dug out of the sand by teams of workers hoping for a new life. 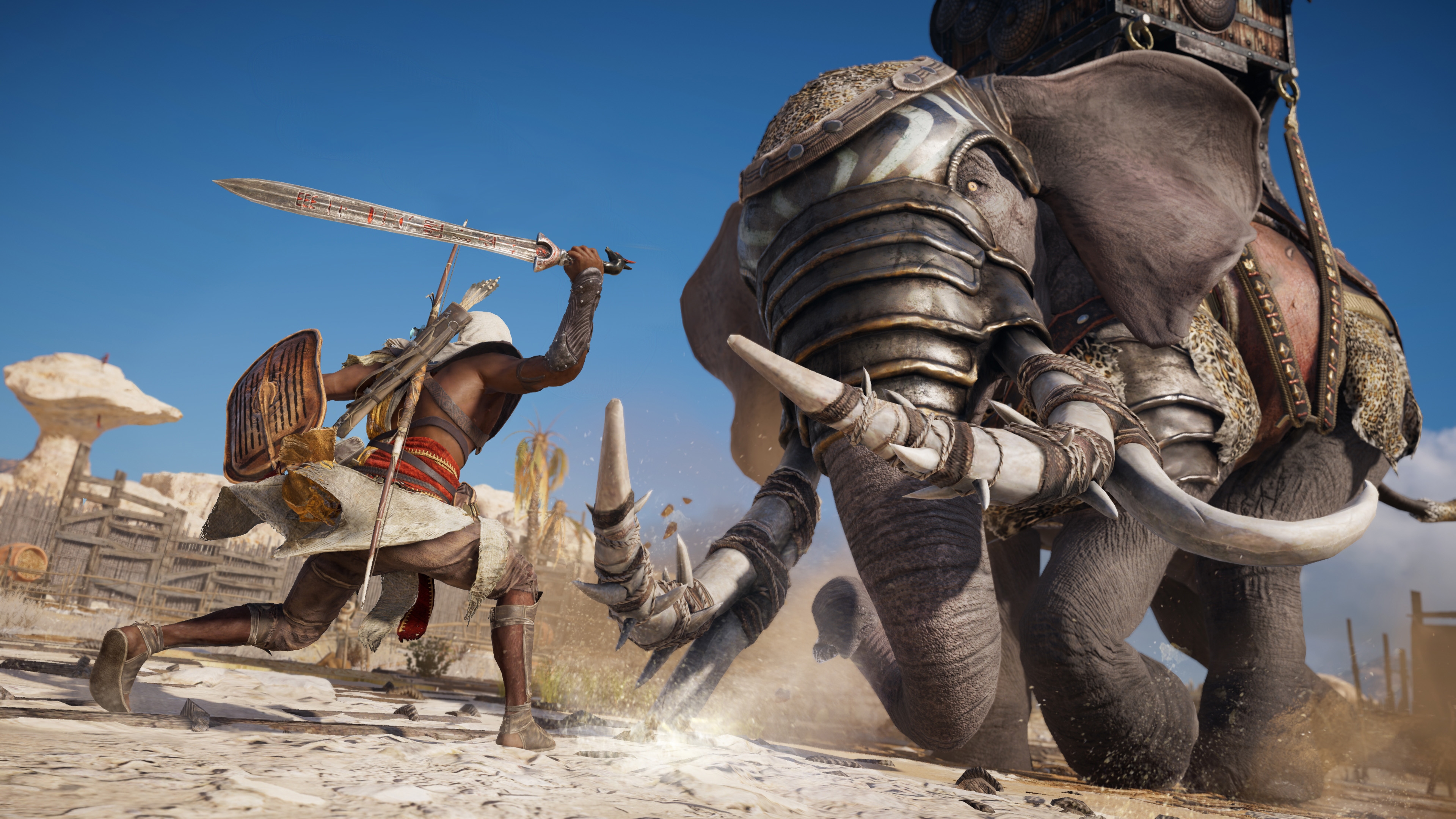 Taharqa took a keen interest in Bayek’s search for the Scarab, but was quickly distracted by news of a gang of raiders attacking the ruined parts of the city. Bayek followed Taharqa into a fight through a raging sandstorm, which soon transitioned into a hunt for the surviving raiders in a waterlogged cave hideout. In stark contrast with the lengthy brawl at Letopolis, this attack ended almost before it really began, when I snuck around to a rooftop entrance and performed an air assassination on the raiders’ leader. Sometimes, the old methods are still the best.

The post Assassin’s Creed Origins – Stealth, Freedom of Choice, and a Lost City in the Desert appeared first on UbiBlog – Ubisoft®.