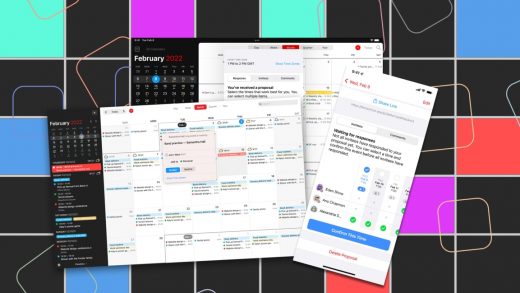 Ask Michael Simmons what distinguishes Fantastical from myriad other calendar apps and scheduling services, and he’ll give you a nonspecific answer: It’s just better.

Sure, he may point to a few particular features, like how it offers a native Mac app that feels at home on Apple’s operating system, or how its new scheduling tool doesn’t require bouncing over to a separate service such as Calendly. But the larger point is that Fantastical excels at the little details that aren’t so easy to quantify.

“A lot of people, they just wouldn’t get it,” Simmons says of those who question what makes Fantastical stand out. “It’s really that simple: We make a great user experience.”

Over the past decade, that mentality has worked out well for Fantastical developer Flexibits, where Simmons is cofounder and CEO. Fantastical’s Mac and iOS apps launched with great fanfare in 2011 and 2012, respectively, and now have millions of registered users. Since switching to a subscription model two years ago, Flexibits’s head count has grown to 18 employees with no outside funding.

Still, Fantastical is surrounded by a wave of new calendar competitors, fueled by the pandemic and a broader demand for powerful productivity apps. Fantastical Scheduling—in which users can send a web link for choosing and voting on meeting times—lays the foundation for even more features to come, which may explain why Simmons describes the launch as the most consequential in Flexibits’s history.

“We expect this to be the biggest impact to our business since Fantastical itself,” Simmons says.

Simmons’s high hopes might seem odd given the number of scheduling tools that already exist, the most well-known of which are Calendly and Doodle. With both tools, you can designate meeting times that work for you and send guests a link for picking time slots, or have users vote on potential times for group meetings. That way, guests don’t have to engage in endless back-and-forth over email.

The difference with Fantastical Scheduling, Simmons says, comes from being built into the calendar app itself. While creating an event, you can easily add multiple proposed times. Recipients get an email with a web link for picking the best slot. For events with multiple guests, users can vote on times that work, and the creator can pick a time based on those responses.

The app also has a new section called “Openings,” in which users can designate a broad range of days and times in which they’re available to meet. It’s meant for booking individual meetings with lots of people and making sure no one overlaps. (Simmons used this feature to book his interview with me last week.)

While these concepts are similar to those of other scheduling services, Simmons points out how odd it is that none of them are built into an actual calendar app. The value of Fantastical’s approach is that it pulls all of your scheduling needs into one place.

“Why would you go to a service to manage your scheduling but then have to go back to your calendar, and then have to manage two different things?” he says. “People do it, but ours is a better way.”

Fantastical’s ability to compete with calendar-apps-come-lately is probably helped by the fact that it’s been beloved for so long. Simmons asked Kent Sutherland to start Flexibits with him in 2009, after years of working at various third-party Apple software developers and getting the itch to build a software company himself. The two developers had met over Simmons’s enthusiasm for Chax, a set of open-source modifications that Sutherland had built for Apple’s iChat app. Simmons began submitting bug fixes and ideas, and found that Sutherland was quick to integrate them.

“Kent is an incredibly nimble and smart programmer, and basically any idea I threw at him, he was able implement quite quickly,” Simmons says. “We worked very well together.”

Their first collaboration was an app for controlling Mac camera preferences, but they quickly pivoted to calendars after Sutherland came up with a parsing engine for natural language. Simmons had the idea to apply the engine to calendar events so that users could type phrases like “Coffee with Sue at 4 p.m. on February 10” instead of filling out a series of input boxes. It was still a novel idea back when voice assistants such as Siri were just getting off the ground. They formally incorporated Flexibits in 2010 and released the Mac version of Fantastical in May 2011.

“When we came out with Fantastical, it really was ahead of its time, but we were solving a problem, and people loved it, and off we went,” Simmons says.

When the iOS version launched in late 2012, the tech press swooned over its slick design, in which a detailed agenda flowed vertically down the page as you swiped across the horizontal “DayTicker” up top. Pulling down on the ticker also revealed a month view, and of course the app featured the same natural language event creation as the Mac version.

Writing for The Next Web, Matthew Panzarino called it “a brilliant reimagining of the purpose of a calendar.” MacStories’s Federico Viticci wrote that it was the rare app that “improved my workflow and personal life in ways that paper never could.” The Verge’s headline hailed Fantastical as “the intelligent iPhone calendar app we’ve been waiting for.” The positive press helped push Fantastical to the top of the App Store’s paid app chart, even beating Angry Birds and WhatsApp.

Simmons says that early success both proved the viability of productivity apps on iOS and led to a boom in buzzy iPhone calendar apps in particular. (Sunrise, Tempo, Canary, Any Cal, and Atlas all launched the following year.)

Still, Fantastical’s competition didn’t exactly last. GoDaddy acqui-hired the makers of Canary in 2014 and abandoned the app. Microsoft bought Sunrise in 2015 and shut it down the following year, having integrated some of its features into Outlook. Salesforce acquired Tempo in 2015 and killed it off a month later.

Simmons says Flexibits entertained similar acquisition offers, but wasn’t interested in having its product killed off. Instead, it soldiered on as a darling of the indie app scene, at least until the next calendar craze came along.

A decade after Fantastical’s debut, calendar apps are starting to become cool again, with startups such as Cron, Rise, Amie, Hera, and Magical all looking to reinvent scheduling. None of them have launched publicly yet—they’re all in early access—but they’ve each raised millions in venture capital, and they all touch on similar ideas: keyboard shortcuts for faster navigation, natural language event creation, built-in scheduling tools, and one-click access to virtual meetings.

Those concepts should all be familiar to Fantastical users—or will be, now that its own scheduling features have arrived—but the influx of new apps and venture capital still poses a threat. While none of them have announced pricing, they may try to chase growth with free service. Some are also web-based, so they’re not limited to Apple devices, and they’re pitching themselves more to teams and businesses than individual users.

Still, Flexibits is evolving with the times as well. The company once charged flat rates for each of its apps on iPhone, iPad, and Mac, and sold major upgrades to its iPhone and Mac versions as separate purchases. Its switch to a subscription model was contentious, but Simmons says it’s been liberating. (The service, called Flexibits Premium, costs $5 per month or $40 per year.) Simmons says there’s no longer the feeling like the company must reinvent its core app to justify selling upgraded versions, and it can steadily add new features such as scheduling and its companion Cardhop contact manager app at no extra charge. The switch also allowed the company to triple in size over the past two years, and it’s still hiring.

“There is a lot of controversy about subscription models . . . and we take very seriously that it wasn’t just a pivot for our business, that we really want to deliver massive value to our subscription,” he says.

To take on a potential wave of new competitors, Simmons hints at other features to come. Fantastical’s scheduling features are the start of a broader push toward winning over business and enterprise users, and while he won’t divulge specifics, he notes that Flexibits is “actively planning other platforms” beyond iOS and MacOS. The company also wants to make the free version of Fantastical more compelling. Venture capital and acquisition aren’t off the table, either.

All of this risks taking Flexibits far afield of its indie Mac app roots, but Simmons says none of those forthcoming changes will detract from what has always been the company’s biggest differentiator.

“We are going to grow. We may get funding at some point, we may not,” he says. “We’re bootstrapped and we’re very successful, and at this point we’re doing what we’ve always done, which is making the best product and the best user experience.” 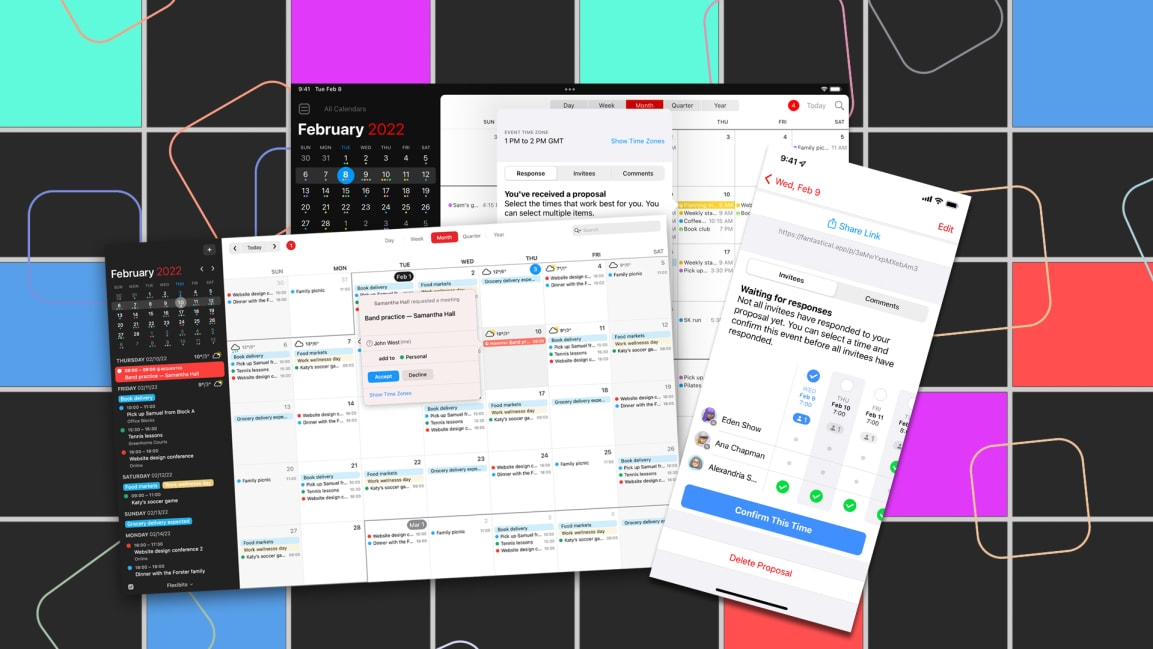