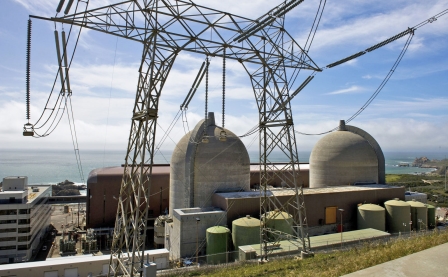 California’s nuclear-powered dream has an expiration date. The state’s utility conglomerate Pacific Gas and Electric (PG&E) announced (June 30, 2016) that they will close the last remaining nuclear plants by 2025. They’ll replace the output with renewable energy and better efficiency in other stations. But, barring any changes to the moratorium on new plants, it’s likely the end for atomic power in the Golden State.

The plant closures were negotiated with environmentalists and labor unions, but unique state policies sealed their fates, PG&E’s CEO Anthony Earley told Scientific American. Specifically, SB 350 passed last year raised the state’s minimum energy needed to come from renewables to 50 percent. Despite PG&E’s requests, the bill left nuclear energy out of the sources it considers “renewable.” This, combined with the bill’s doubling of mandated energy efficiency, along with the rise of homegrown electricity, contributed to their decision to close the plants.

The moratorium on building new nuclear plants only exists until California finds a permanent solution for existing radioactive waste, but that’s another hurdle that doesn’t exist for renewable energy sources. Environmentalists believe this agreement could be a template for other states to shutter nuclear or fossil-fuel plants and replace them with renewable energy sources.

But the deal’s still on paper and awaiting approval by the California Public Utilities Commission. For it to be used as an example, its execution would have to avoid the mistakes made when California closed its San Onofre nuclear power plant back in 2013. To make up the energy shortfall, greenhouse gas emissions from power plants actually increased statewide.