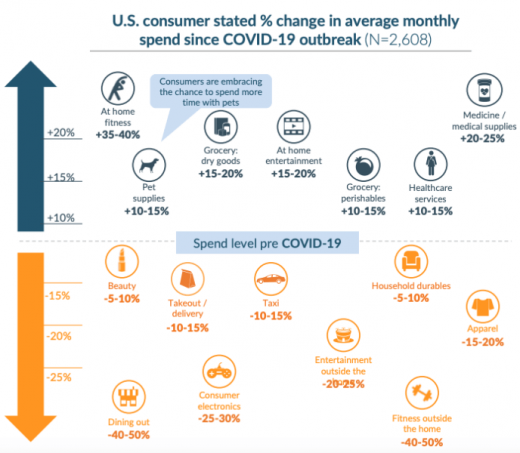 A large majority of consumers expect a recession next year but are spending up to 30% more online, according to new survey data.

Consumer sentiment has turned sharply negative as the virus has disrupted every aspect of daily American life. According to a consumer survey from Engine, 88% of consumers in the U.S. are now concerned about the pandemic. And according to another survey of roughly 2,600 U.S. adults from L.E.K. Consulting and Civis (.pdf), between 80% and 90% of adults expect a recession next year.

Buying patterns shifting quickly. In addition to measuring consumer sentiment, the survey explored how the coronavirus has shifted buying patterns across industries. Generally, the survey finds “significant increases in at-home activities, particularly cooking at home, watching television, browsing social media and exercising at home.” Conversely, people are “limiting activities with high exposure risk,” which include going to bars/restaurants, gyms and public events (if those venues aren’t already closed). In addition, the survey found that “online spend is also on the rise, growing 10%-30% across grocery and non-grocery purchases.”

Even though consumers are spending considerably more online than before the outbreak, that spending has shifted. According to the Civis survey there are very clear winners and losers. In the former category are at-home entertainment services, at-home fitness, grocery and pet supplies. Losers include dining out (as expected), major household purchases (e.g., furniture) but also restaurant takeout, electronics and clothes.

The data suggest that the money being spent online is a redistribution of aspects of traditional offline spending. Other purchases are being deferred or cancelled entirely.

Changes in monthly consumer spending as of March 18

More online shopping, some experimentation. A separate survey of 1,000 U.S. adults in mid-March, conducted by Valassis echoed many of the findings and trends in the Civis survey. It discovered that 42% of consumers were shopping more online with only 8% saying they were engaged in less e-commerce.

The virus also appears to be motivating many consumers to try on new shopping behaviors such as restaurant and grocery delivery and, in some cases, buy-online-pick-up-in-store. In addition, Valassis found that at least under the circumstances, brand loyalty was being impacted:

These experiences may result in some longer-term changes in consumer shopping patterns. However, about half survey respondents (48%) said they didn’t expect to adopt new behaviors in the aftermath of the outbreak.

Facebook itself said that usage was “skyrocketing,” as much as 50% in some hard-hit countries. However, the company also said that the usage increase wasn’t translating into a corresponding increase in ad spending and revenues.

Why we care. While there’s no crystal ball, it’s clear that the virus is a major event for retail and e-commerce, and that some consumer behaviors will change (perhaps significantly) over the long term. E-commerce giants such as Amazon are set to benefit, as will the online channels of many established retailers such as Costco, Target and Walmart. However, many traditional retailers will struggle and perhaps fail in a post-COVID environment.

But more concerning is the consumer expectation of a recession, which may be a sober and realistic assessment of current circumstances. Roughly 70% of U.S. GDP is made up of consumer spending. But expectations can translate into reality with consequences for the entire economy and digital marketing industry. 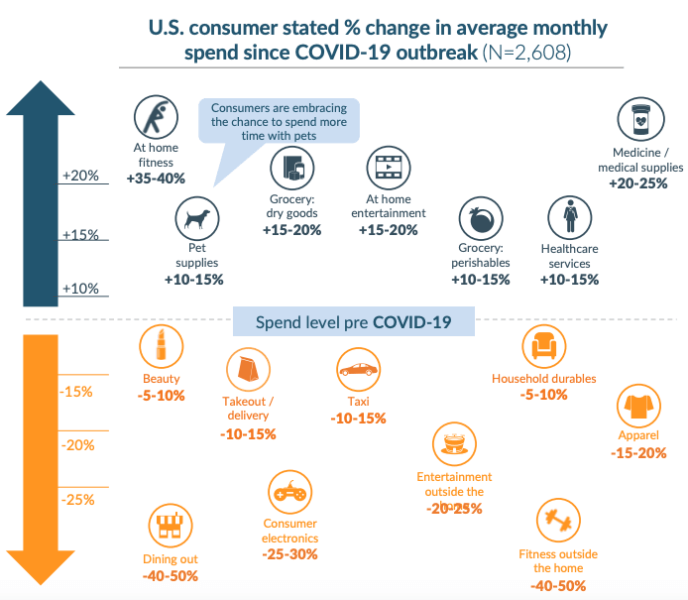