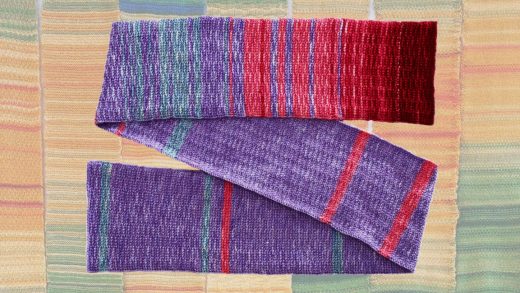 Crafting takes a dark turn in the age of climate crisis

In 2015, University of Georgia marine scientist Joan Sheldon decided to translate climate change temperature data into a scarf. She took some climate data and began slowly, crocheting the global average temperature for each year from the 1600s to the present using a simple color coding system. She used purple to represent normal temperatures, shades of blue for cooler temperatures, and shades of red for warmer temperatures.

The result was a mostly purple scarf, with occasional pale blue and red stripes, and increasingly dark shades of red on one end. When Sheldon presented the scarf at a scientific conference, she was stunned by the reaction. Even scientists who were familiar with the data wanted to touch the scarf, to find the year they were born. “They never would [do this] with a science graph,” she says. “It approaches you in a different way.”

In the last few years, yarn-based visualizations of temperature data have exploded in popularity in the knitting community, particularly through the organization Tempestry Project, which has sold more than 600 kits supplied with NOAA climate data and a variety of yarn to knitters across the country. Now, hundreds of knitters share their work and look for new sources of data on an active Facebook group. Groups on the yarn arts website Ravelry are also devoted to turning different types of climate data into scarves and blankets. Data viz knitting has made its way into classrooms as well: Penn State Brandywine professor of earth science Laura Guerin uses a temperature scarf in her introductory science courses to help non-scientists understand temperature data in a visceral way. Both scientists and climate activists are using these nontraditional visualizations to teach people about climate change.

For those who care deeply about what’s happening to our planet, knitting a scarf or blanket using temperature data can have another purpose: as a therapeutic, emotional outlet. It’s like anxiety baking, but for climate change. “I found this to be one of the most mindful projects I have ever done,” says knitter Kiki B. Smith, who is a member of the Tempestry Facebook group. “Each stitch, each row, a meditation on the climate, humanity, the Earth.”

Knitting has long been considered a therapeutic exercise, primarily because of its rhythmic, repetitive hand movements. Physiotherapist and founder of the organization Stitchlinks Betsan Corkhill has studied knitting’s mental health benefits for years, including through a 2013 study published in the British Journal of Occupational Therapy, which surveyed more than 3,500 knitters globally. The study found that 47% of respondents felt like knitting helped them think through problems, and 81.5% said that they felt happier after knitting. Communal knitting also add to knitting’s benefits, with 86% of people saying that knitting with others gave them a sense of belonging. “[Temperature data knitters are] getting a lot of benefit from doing something in a group, and also benefit from the physical, rhythmic action of knitting,” Corkhill says. “That process will be calming.” Long-time knitter Lea Redmond puts it succinctly: “It’s like running with your fingers.”

But knitting temperature data is not always an easy project to tackle, especially for someone who cares so deeply about climate change. “For a long time I avoided it because I was already so depressed about global warming and the future of the Earth that I didn’t think I could handle such a strong reminder of the warming,” says Christine Armer, another member of the Tempestry Facebook group. But once she did decide to start a scarf, she found it was a healing process. “Knitting the years day-by-day has been a great way to break things down into small bits so the whole isn’t so overwhelming. I still am terrified of the future of the Earth, but it’s not hitting me emotionally every day now. I can carry on with my life and pretend it will be okay. For me, this work was as much about addressing my depression that was stuck on global warming as it was about the knitting itself.”

Emily McNeil, one of the cofounders of the Tempestry Project, found that knitting Tempestries has helped her cope with her emotions both when it comes to climate change and other, personal tragedies. “I have knitted a dozen or so Tempestries so far and mostly . . . felt they were a way to channel anger over political inaction into something beautiful,” she says. “More recently, I made one commemorating my father’s birth year, and I was surprised that it became a way to channel grief–over his long-ago death, over what he would think of the world today. It became a very intimate project, as I knit his first year, and I felt closer to him than I have in years.”

Others have focused primarily on using the temperature scarves as a means of raising awareness about climate change. “I think that what we are doing to our planet is devastating, and I see this project as an important visual piece that will help people who don’t quite get it yet, to understand,” says Tanya Seaman, another Tempestry Facebook group member who is working to develop a Green New Deal platform for Philadelphia ahead of the city’s mayoral election. She is currently planning to make a blanket composed of temperature data from her birth year and 2018 to show how the world has changed since she was born. “For me, raising awareness and putting forth constructive ideas is precisely how I deal with what otherwise would make me want to crawl under the covers and hide from this incredibly enormous crisis.”

Of course, not everyone finds knitting to be an antidote to climate anxiety. “I do feel strongly about climate change, but if I was doing a project like this and seeing myself knitting warmer and warmer colors I might get very stressed by it,” Corkhill says.

Indeed, marine scientist Sheldon had a strong emotional reaction to that first climate-oriented scarf she made back in 2015. “As I had to put away a color knowing I’d never need it again, I felt it,” Sheldon says. “When I had to get another red, I got a little angry.”

For earth science professor Guerin, knitting temperature scarves raises a tough but important question. “We’re creating [the scarves], people are paying attention to them, we’re having the conversation that climate change is happening,” she says. “But the next step is, what do we do about it?” 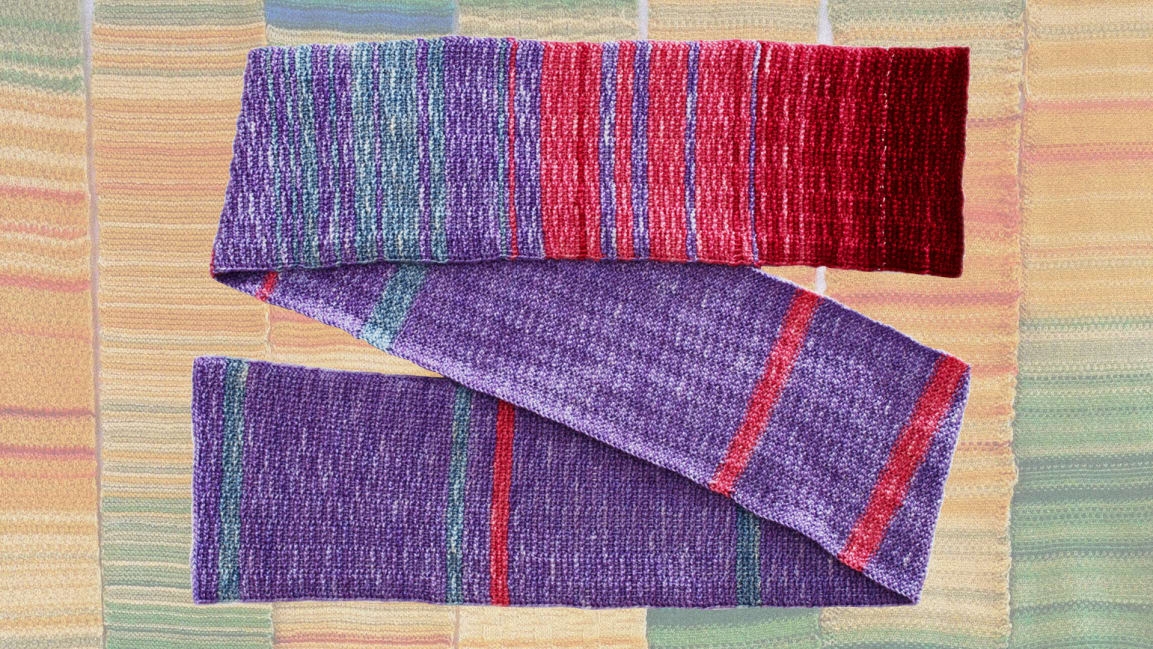