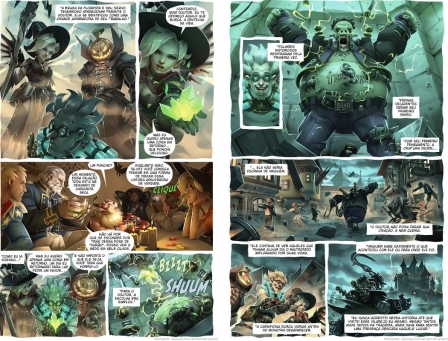 The Google Play book store lists the new Overwatch comic. Furthermore, it shows Junk Rat having a maniacal laugh. The title Junkenstein is written in read at the bottom left. Release date is set for October 12, 2016. We have good reason to believe there will be a major content drop on the day this comic arrives. Because it happened previously with another Overwatch comic.

The cover for the new comic issue also shows new skins for the characters. Standing behind Junk Rat, you could see Mercy in a witch costume. She seems to have the proper broomstick riding witch attire. These could be the three Legendary skins for the Halloween update. The third character on the comic cover appears to be Reaper. It’s hard to tell because of the Pumpkin mask but, from the looks of it, it could only be Reaper.

Junk Rat can be seen bending over a creation of his. We think this could be Road Hog. So, Doctor Junkenstein, Witch Mercy and Scary Looking Pumpkin Guy Reaper? Most probably. So far there is no confirmation from Blizzard but this comic provides a lot of answers.

Overwatch is a team-based multiplayer first-person shooter video game developed and published by Blizzard Entertainment. It was released in May 2016 for Microsoft Windows, PlayStation 4, and Xbox One.