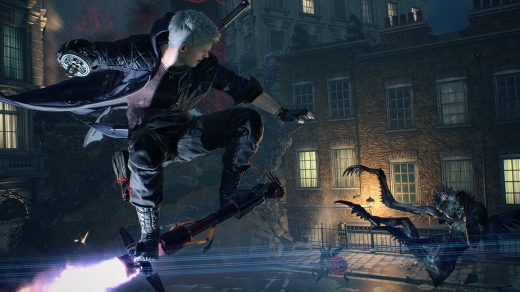 Ten years after the debut of Devil May Cry 4, Nero is back in the driver’s seat and he’s never looked better. It’s not just the haircut, either — Devil May Cry 5 runs on the RE Engine built for Resident Evil 7: Biohazard, and Capcom’s goal is to build a photorealistic game filled with gooey demons, witty one-liners and flashy combos. The title’s first hands-on demo at Gamescom 2018 highlights these exact elements and wraps all of it up in an ichor-crusted, gorgeous package.

Nero isn’t the only playable character in Devil May Cry 5. He’s actually one of three — there’s Nero, Dante and a mysterious third character in a long black trench vest. Itsuno, Walker and the rest of the Capcom development team are tight-lipped about this person’s identity and the potential cast of recurring characters, such as Vergil, Dante’s twin brother and frequent enemy. 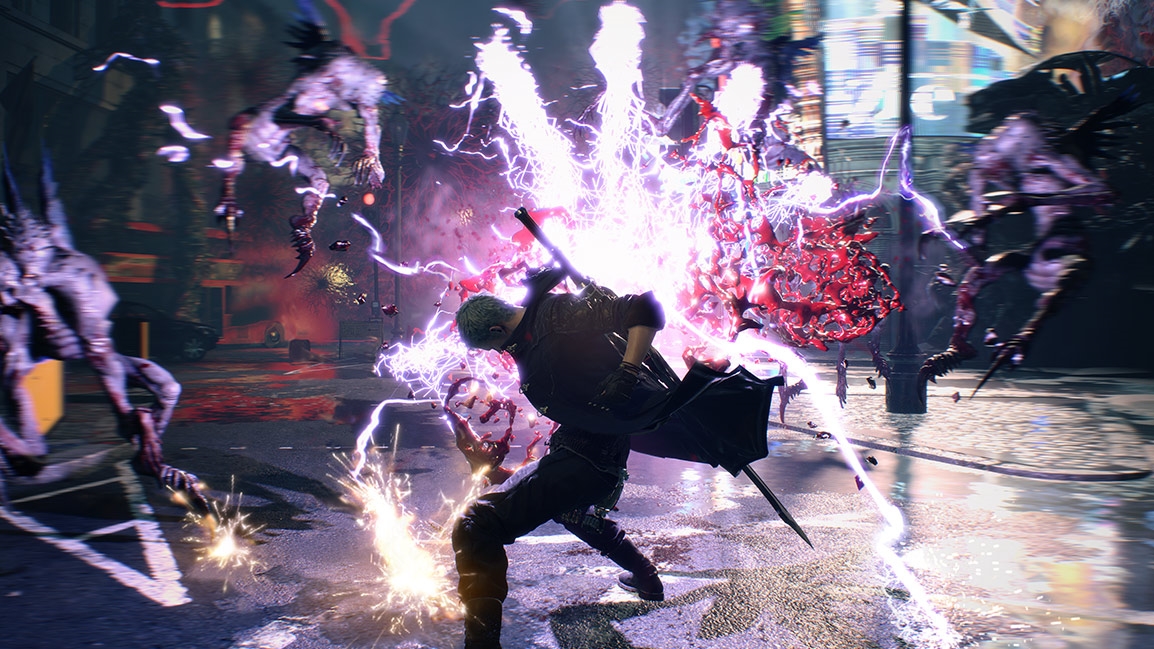 “That guy, we haven’t said anything about yet,” Walker said. “So right now, he’s still a mystery. Is it a guy? Is it a girl? I don’t know. That character is a mystery. But in terms of Vergil, we do get a lot of requests. …That’s all I can say right now.”

Devil May Cry 5 is scheduled to hit Xbox One, PlayStation 4 and PC on March 8th, 2019, and it runs up to 60FPS and 4K. Capcom is preparing to show off more details at Tokyo Game Show in September, including information about Dante’s role in the game.

Follow all the latest news live from Gamescom here!

Devil May Cry 4 was the first game in the franchise to star Nero, a reluctant ally to series protagonist Dante. Nero is a human with a smattering of supernatural abilities, including a demon-powered arm named Devil Bringer. In Devil May Cry 5, a mysterious villain rips Nero’s demonic arm from his body, and he replaces it with a series of robotic limbs. These are created by Nico, a young craftswoman who travels with Nero in a tricked-out white van as part of a demon-hunting service. She’s the granddaughter of Nell Goldstein, the gunsmith who made Dante’s iconic pistols, Ebony and Ivory. Nico and Nero roam the streets, bantering in between battles with dark, otherworldly forces.

Nero’s new robot arms are known as Devil Breakers, and there are eight standard models. The demo featured just two, Overture and Gerbera. Overture is the default Devil Breaker, throwing out a powerful, electric fist that bashes nearby enemies. Gerbera, on the other (but actually the same) hand, throws enemies away from Nero and bounces him backward, allowing him to easily combo into high jumps and air evades.

Each Devil Breaker has a special ability called Break Age as well, though activating this move also automatically destroys the arm. Overture’s Break Age turns the arm into a bomb with a delayed timer, unless Nero decides to shoot and detonate it on the spot. Gerbera’s moveset is inspired by gerbera flowers, and its special ability takes two forms, depending on Nero’s position. On the ground, his Break Age is Stamen Ray, which acts like a standard hadouken. In the air, the move turns into Petal Ray, which rains down a cone of bouncing lasers. 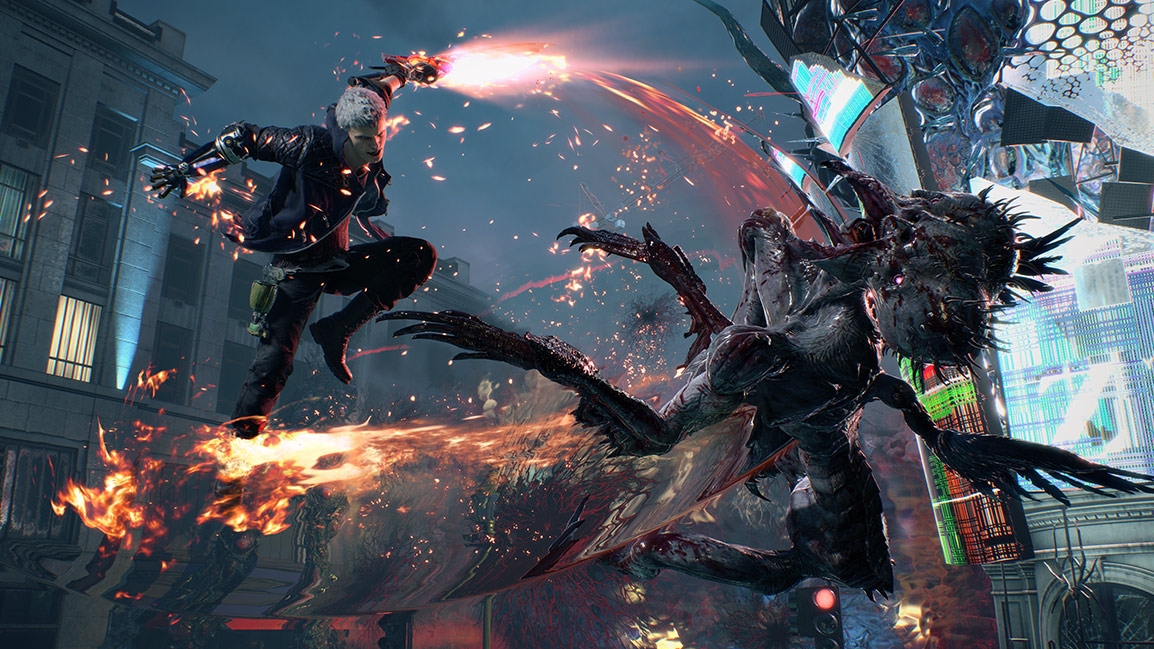 Nero’s Devil Breaker abilities add a rich layer to the combat in Devil May Cry 5. Nero can carry up to four disposable arms at a time and they take damage as he fights, eventually disappearing from his arm completely. He finds more arms scattered around the city — in the demo, Devil Breakers are nearly as common as cobblestones, with at least one in every battle arena. If Nero uses all of the Devil Breakers in his possession, the battle doesn’t stop and his right arm is cut short at the elbow, awaiting another attachment.

Devil May Cry is known for its rapid-fire, combo-driven combat and the Devil Breakers only add to this methodology, allowing Nero to pull enemies toward him and string together complex attacks with his pistol, sword, grappling and jumping abilities.

Fighting with Nero is an extremely satisfying, button-mashing madhouse. Performing intricate combos nets players a higher Stylish Rank, as is standard for the series, but the music also ramps up as Nero lands his abilities, adding extra intensity to each fight. This is classic Devil May Cry, but in a visually and aurally upgraded form. 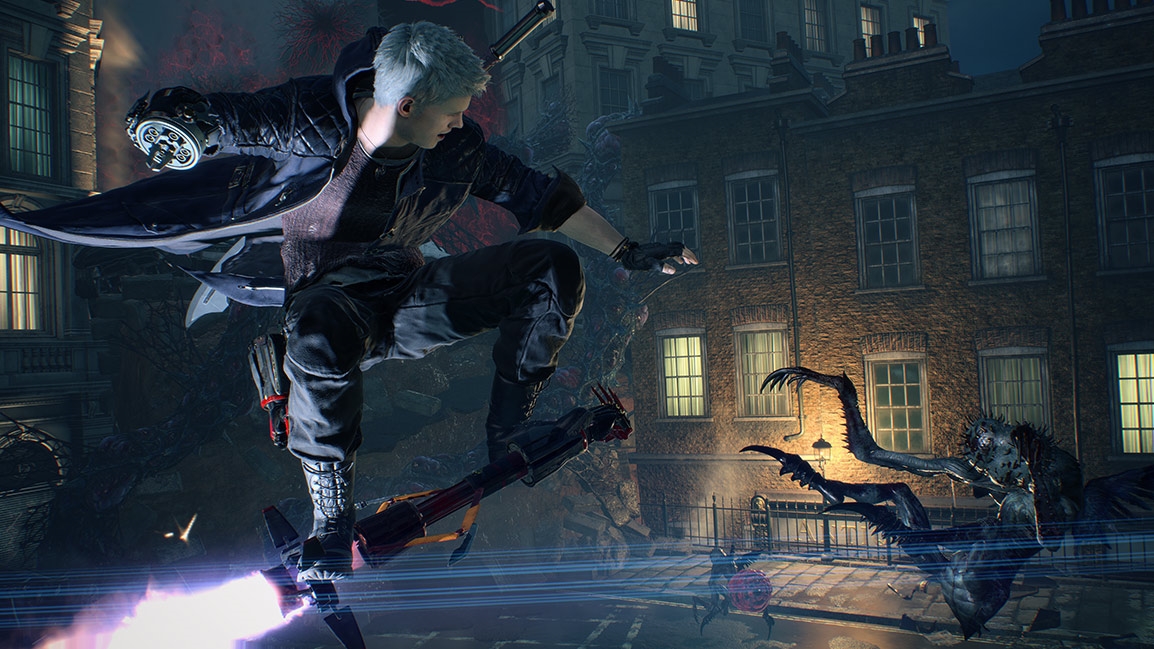 That fluid, fast-paced gameplay is critical to the Devil May Cry series, according to Itsuno.

“The most important thing about Devil May Cry is that the action itself, there’s beauty to it,” Itsuno said (as translated by Walker). “And not just the way it looks, but the way it feels, the way it animates, the response you get from everything. That’s the real importance.”

The Gamescom demo is a modified slice of the main game’s second chapter and it introduces a new way to upgrade Nero’s arsenal. There are phone booths all around the city, and Nero can use them to call Nico and the demon-hunting van to his position, and he’s then able to modify his weapons by spending red orbs collected from the corpses of his enemies. Classic demonic capitalism.