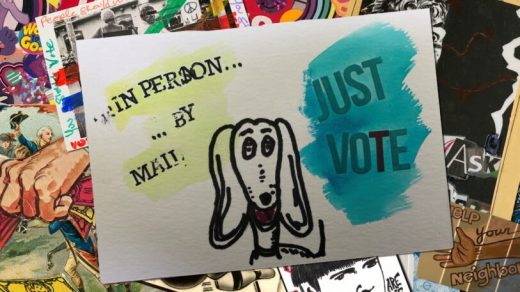 Devo’s Mark Mothersbaugh survived COVID-19. Now he wants to save the USPS

Donald Trump doesn’t want a functioning, mail-in voting system. He has admitted that the USPS is underequipped to handle the deluge of mail-in votes anticipated this year, while denying the organization more funding. He has appointed a postmaster general who cut overtime and removed 711 sorting machines. And he has even instructed his base to, illegally, vote twice—once in person and once by mail, to stress-test the system.

What can you, an everyday lover of democracy, do in this moment? You can give the USPS 35 cents, buy a stamp, and be part of the Postcards for Democracy project—spearheaded by artist Mark Mothersbaugh of Devo fame and multimedia artist Beatie Wolfe. Their project is inviting people to create and mail handmade postcards to an address on the project website, to be part of a collective demonstration over the need for a robust mail service during this time.

Since the project site launched a week ago, Mothersbaugh and Wolfe have been inundated with thousands of cards—”enough to fill a room in the White House,” in the words of Mothersbaugh, who is still recovering from a severe bout of COVID-19. But it’s not just the sheer number of responses that makes the project impressive; it’s the cutting, creative expression of the submissions. Some look like political cartoons. Others are a suitable cover for Time or The New Yorker. Others still appear like protest signs shrunk down to a piece of paper the size of your palm. They are rendered in marker, oil paints, and magazine-clipped montage.

A personal favorite card features two hats—that of a postal service worker and that of a MAGA supporter. It reads, “More USPS, Less USBS.” Get it? I know, it’s a silly pun. But in the middle of our science-denying, wildfire-strewn pandemic hellscape, I’ll take it.

The project was born out of the restlessness of the pandemic. To stay sane during quarantine, Wolfe began writing letters and mailing art to friends. From that experience, she approached Mothersbaugh, who has been drawing and painting cards since the ’70s as a way to categorize his thoughts—so frequently, in fact, he says that he has touched a postcard nearly every day for the last 40-plus years. “Mail is definitely one of those endangered experiences that I believe is core to our humanity for a number of reasons,” says Wolfe. “I loved the idea of us creating an exhibition, a kind of mailbox menagerie, out of people’s letters in lockdown—at this time when physical communication is more important than ever. And this suddenly became much more timely, and took on an additional dimension, in light of recent events.”

A pandemic art project evolved into a political art project, almost by necessity, following Trump’s attack on the postal system. To kick off the project, Mothersbaugh and Wolfe sent cards to one another, riffing on top of one another’s work to cocreate postcards. Wolfe says she’s obsessed with Mylar, and she recycled the material to make cards from her V&A museum Space Chamber, inspired by the world’s quietest room in which she streamed an album in 2017. (The duo discovered together that Mylar is just about impossible to draw upon, though Mothersbaugh found some success with a fine-tipped Sharpie.)

As for what happens to all these postcards once they’re mailed: The pieces are being photographed and uploaded online, and they will also be exhibited in a physical gallery in the future. It’s a poignant project. Even though we’re all stuck inside, Postcards for Democracy lets us send pieces of ourselves, and what we believe in, while financially supporting a system that needs us. And it proves, yes, in 2020, mail isn’t just essential for our democracy; it’s still pretty cool to put something into a box and, magically, send it across the world. 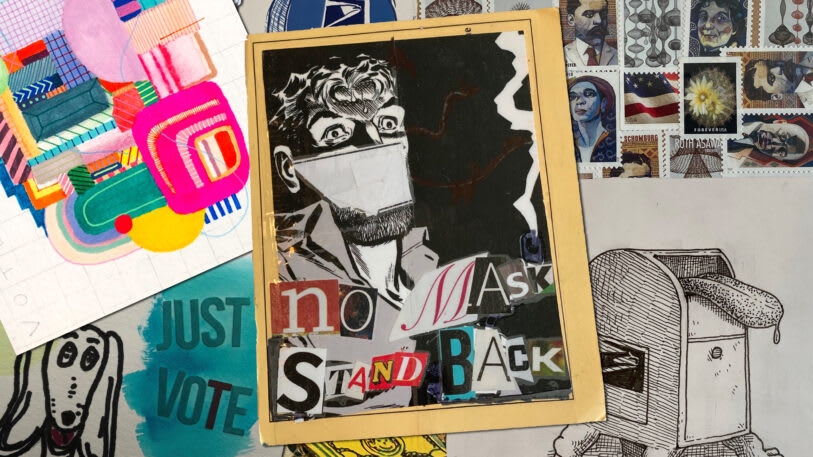 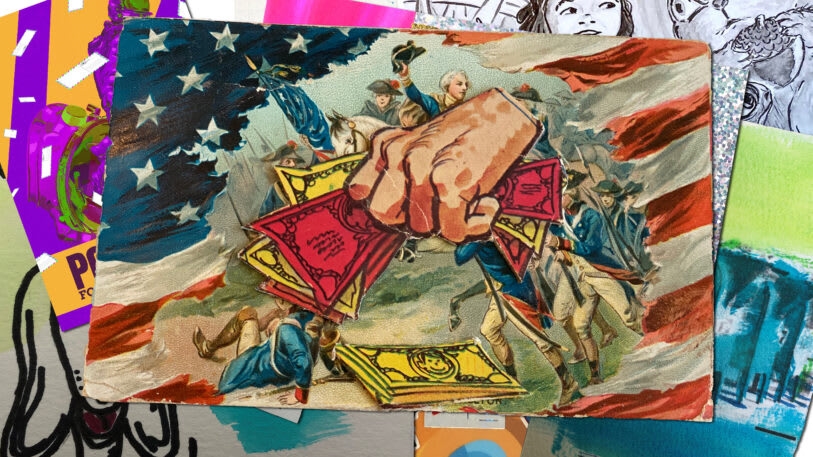 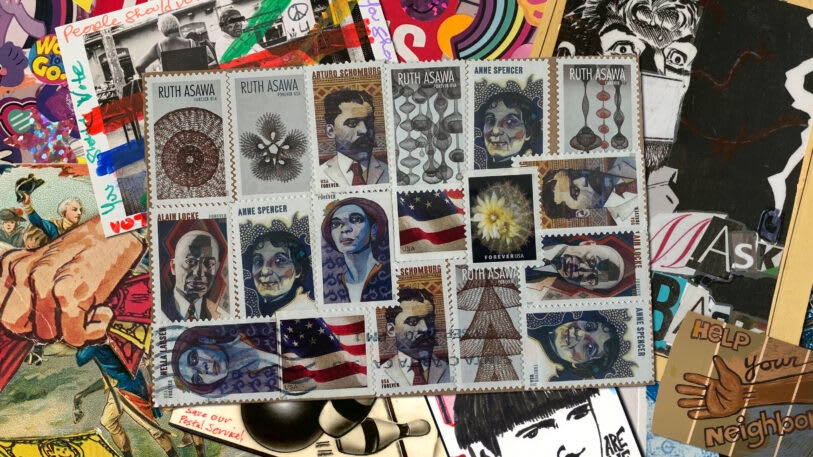 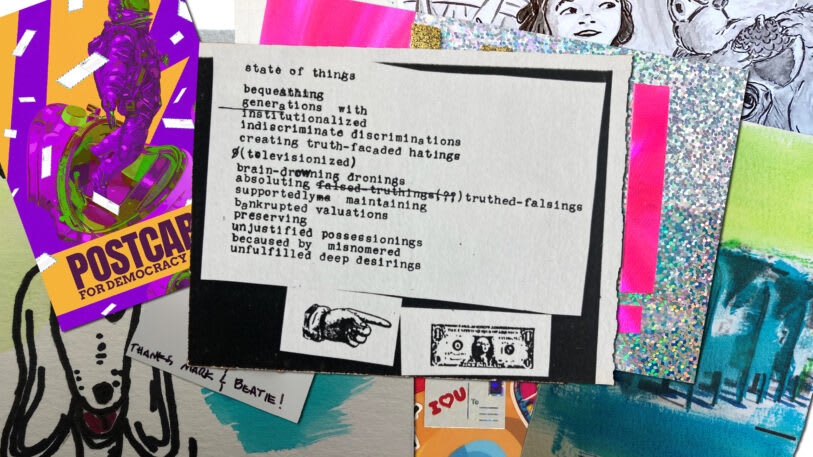 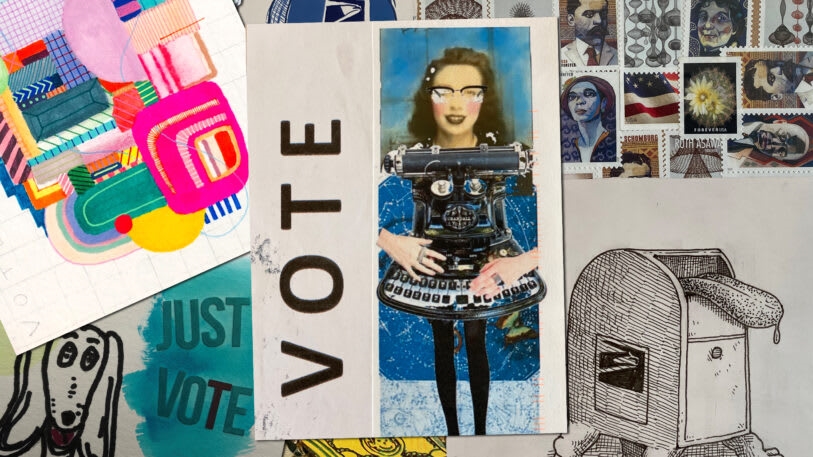 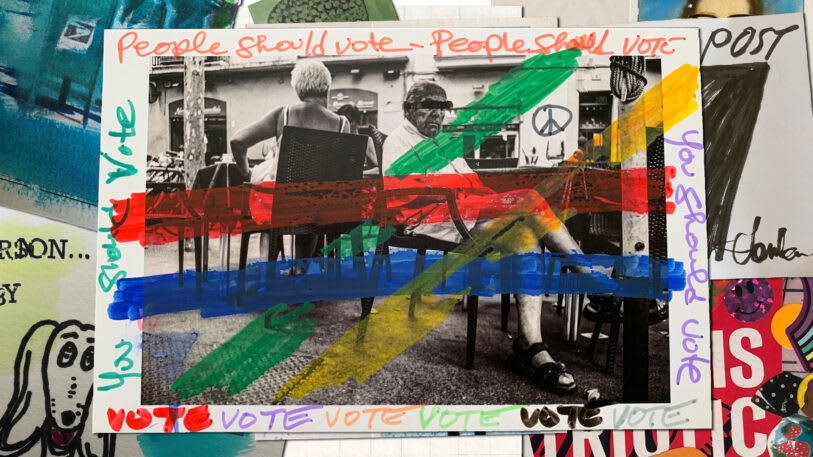 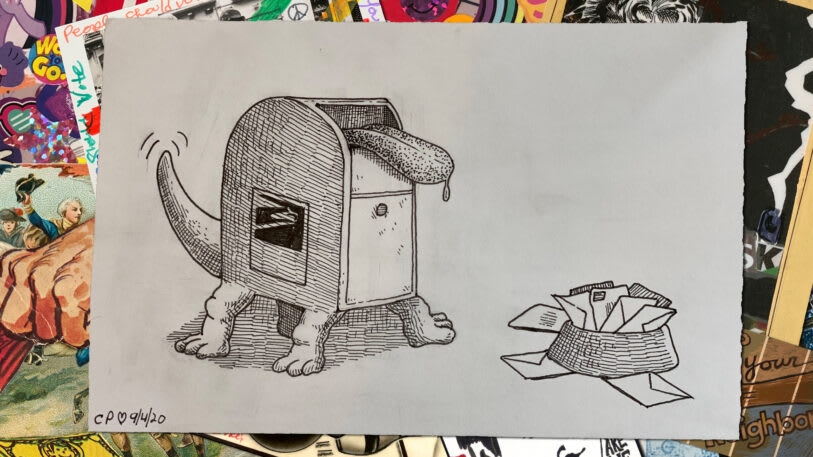 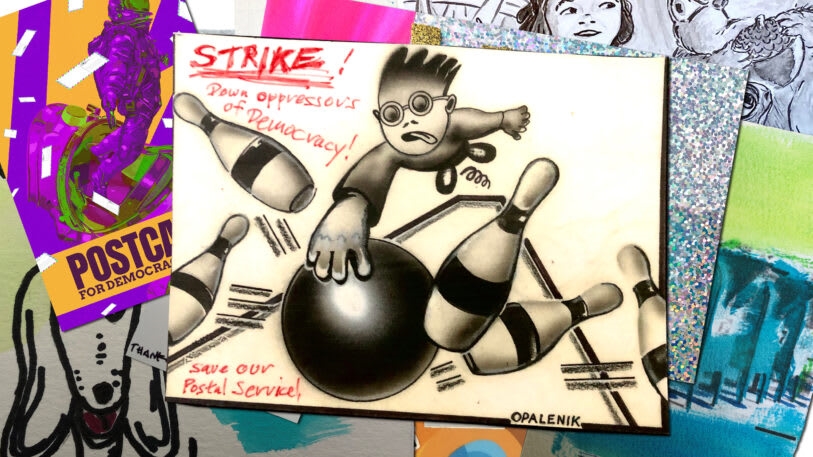 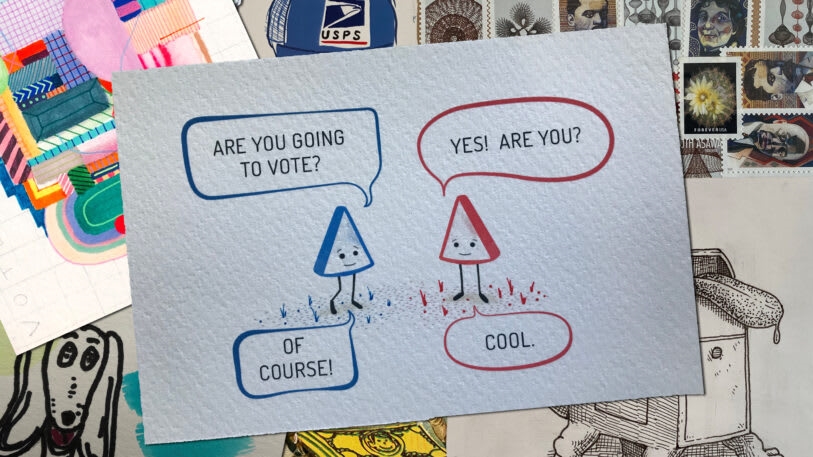 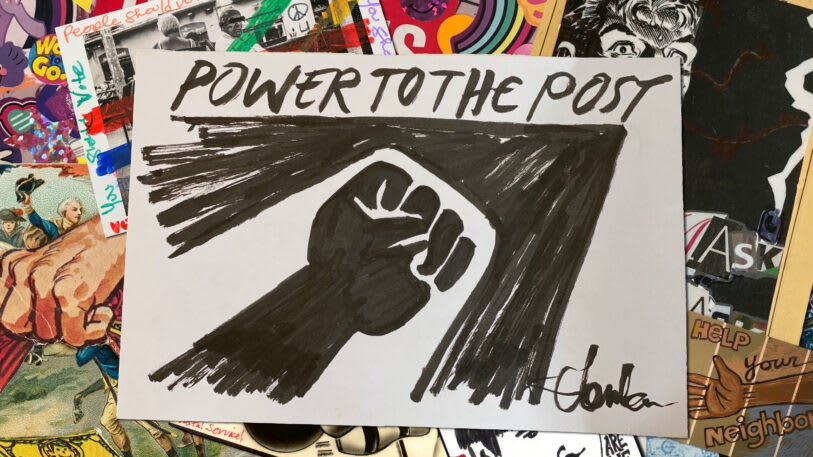 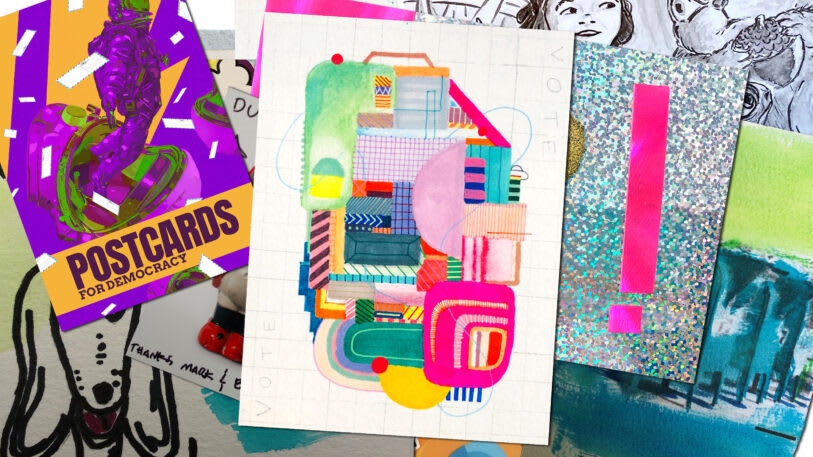 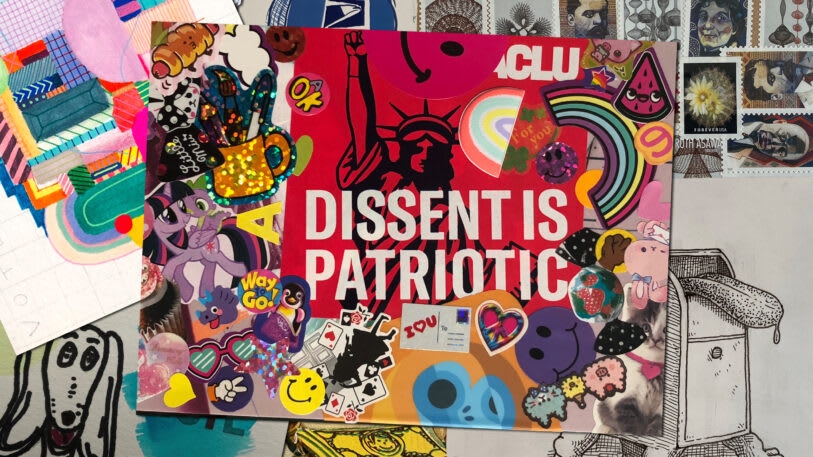 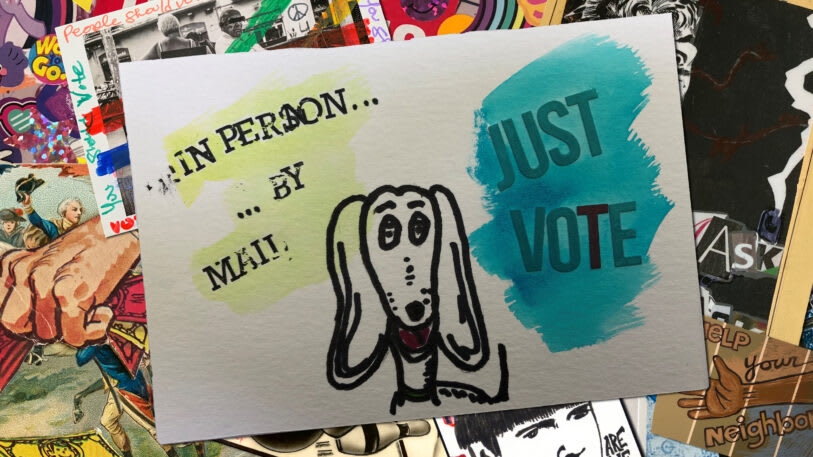 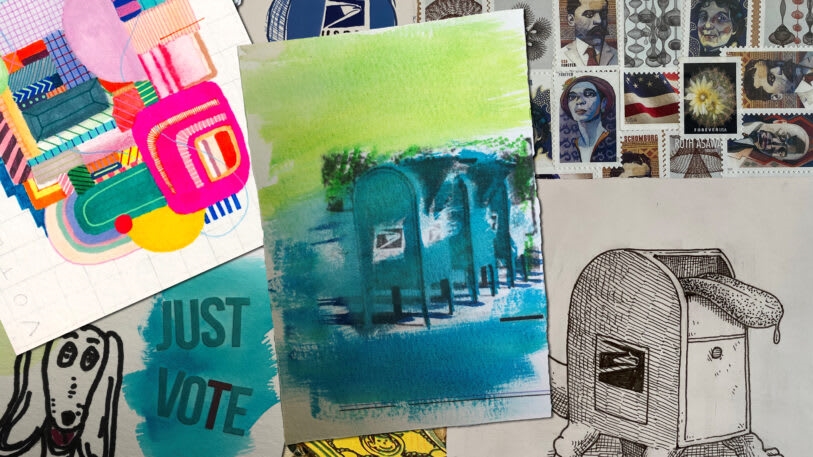 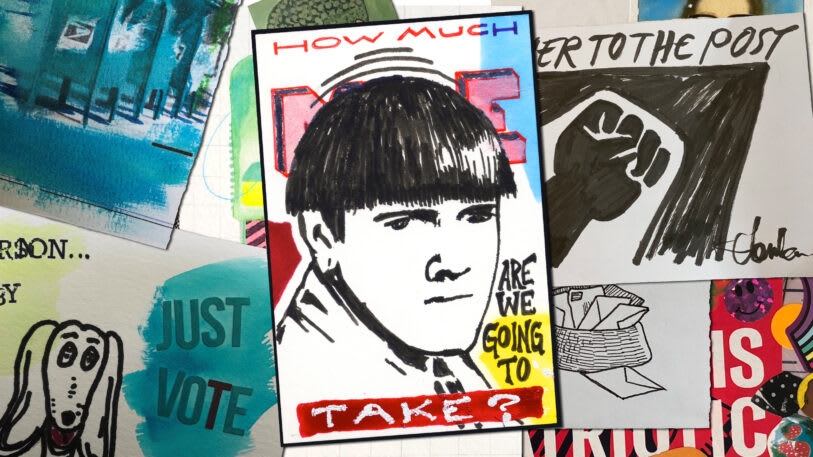 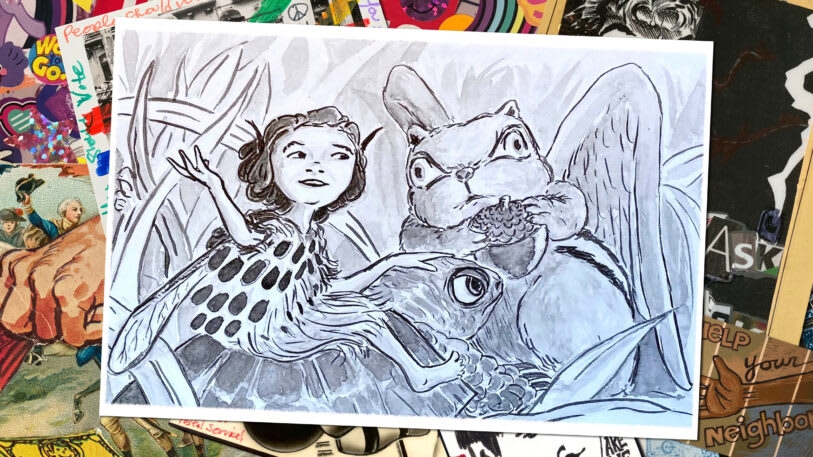 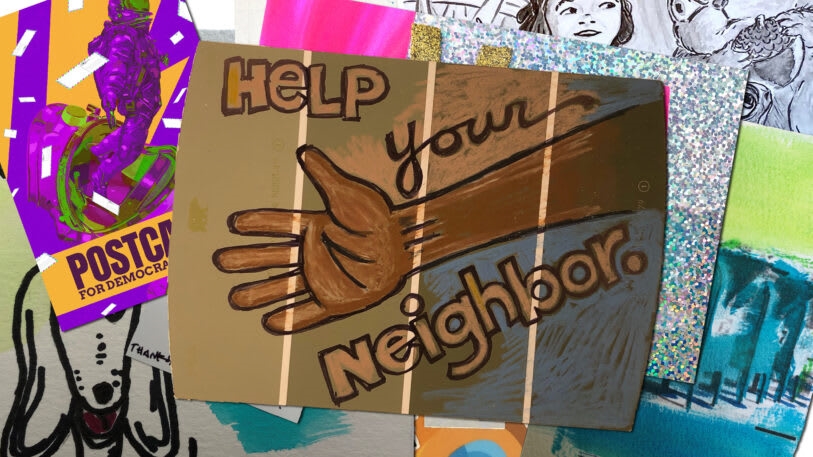 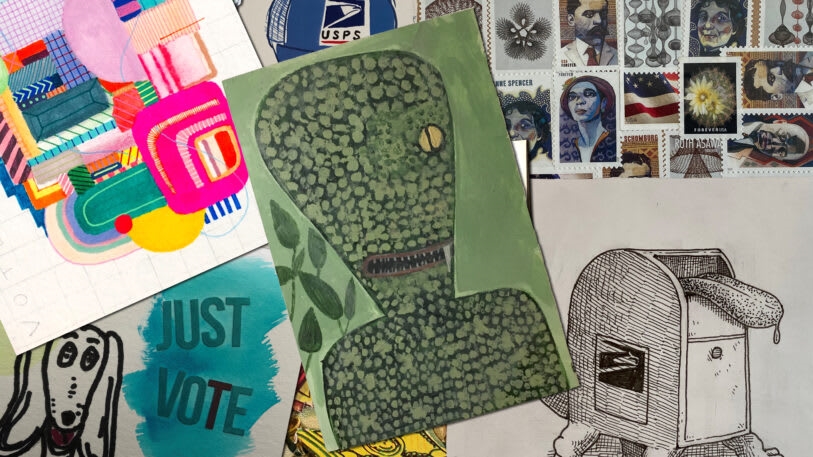 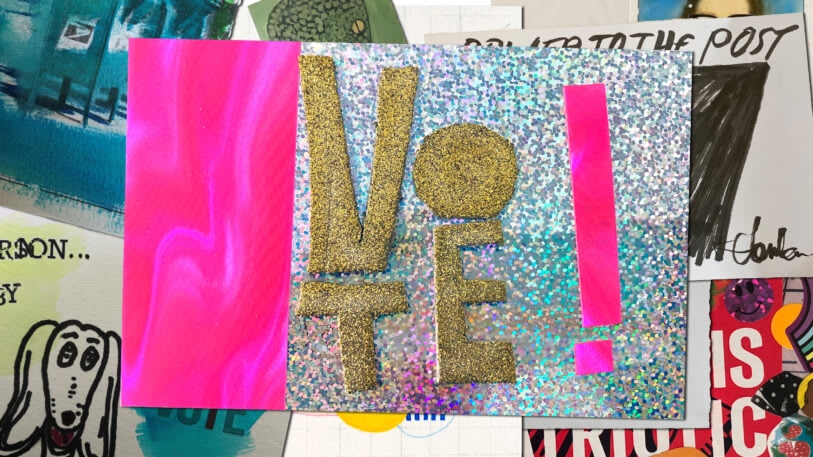 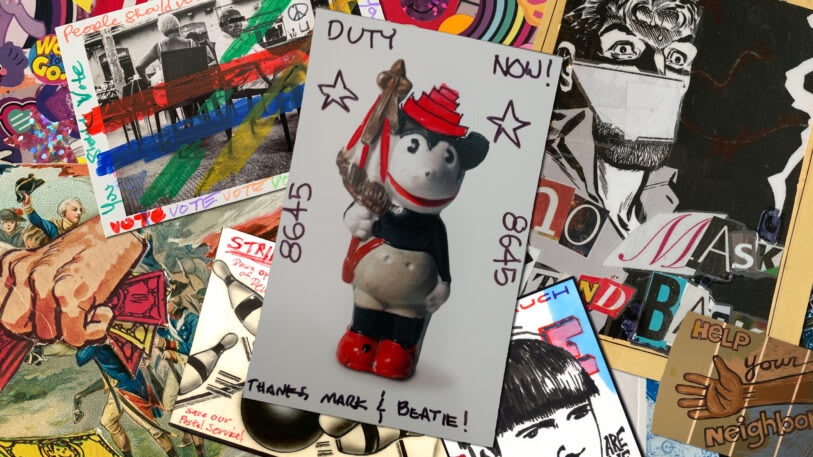