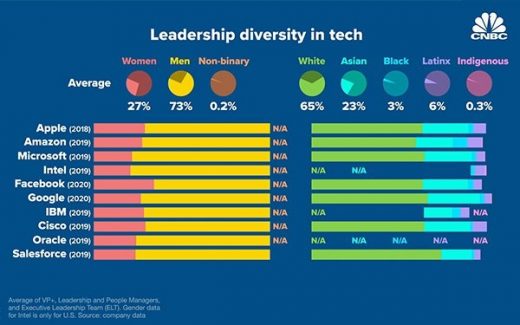 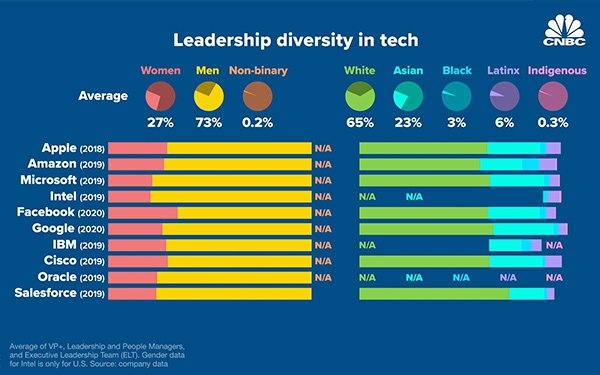 Diversity in the tech industry is crucial for technical progress, as companies one-up each other in a renewed focus to change.

The Boston Consulting Group published a post in 2018 that describes how companies with more diverse leadership teams report higher revenue from innovation. Still, women only make up 32% of ten major technologies like Apple, Amazon, Facebook, Microsoft, Google, Intel, and Oracle.

This is a major problem and leave many technical jobs unfilled — about 1 million by the end of this year, according to CNBC, which cites Tarika Barrett of Girls Who Code. These jobs pay twice the average and could very easily boost families who need it.

Data gathered from 10 major U.S. tech companies gathered between 2014 and 2019 show the percentage of women in these workforces increased less than 2%.

Reports specifying gender and race note most of these women were White. The gender data doesn’t consider transgender or gender nonconforming employees, and only one — Salesforce — of the 10 companies reported non-binary employee demographics.

CNBC published a video exploring why it has been challenging for these companies to diversify.

They found that between 1999 and 2005 the combined number of black employees dropped 16% while the total workforce grew 16%. In the same time frame, women in the workforce declined 4%.

The Black Lives Matter Movement brought this back into the spotlight. Some believe if there is an abundance of talent coming into the workforce from worldwide, there’s not as much of an incentive to develop talent domestically.

The disconnect starts at the beginning of education and can be traced back to the lack of diversity in K-12 school programs. Collage programs are the next in line.

The COVID-19 pandemic is also leading to the loss of jobs for women. The report notes that this spring, women, ages 25 to 54 lost more jobs than men.

Women are exiting the workforce at a slightly higher rate than men, federal data show.