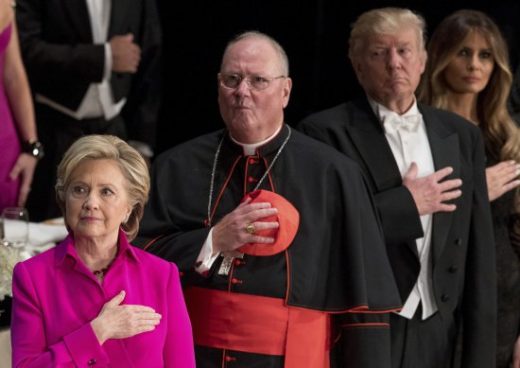 Donald Trump and Hillary Clinton Are Sitting One Seat Apart at the Alfred E. Smith Dinner

Donald Trump and Hillary Clinton Are Sitting One Seat Apart at the Alfred E. Smith Dinner

Donald Trump and Hillary Clinton, who are sitting one seat apart from each other at Thursday night’s Alfred E. Smith charity dinner, appeared to have exchanged a few words with one another at the table.

Reporters covering the white-tie affair, which is an election year tradition, noted the lack of interaction between the pair of presidential candidates on Twitter about 15 minutes before the event began. At around 7:45 p.m., many correspondents said Clinton and Trump had not acknowledged each other or spoken since the start of the seating process. Trump and Clinton are separated only by Cardinal Timothy Dolan, the Archbishop of New York.

However, as the dinner went on, at least two photos surfaced on Twitter that appear to show both Trump and Clinton leaning in and having a conversation with Dolan.

Detente?! Hillary and Trump appear to be exchanging some words pic.twitter.com/9wsf0AKwbL

Hillary and Donald seem to be getting along. Chatting away with a Cardinal Dolan DMZ at the Al Smith Dinner. #AlSmithDinner pic.twitter.com/a5Muk9scPL

The dinner comes one day after the final presidential debate, a contentious showdown in which Trump called Clinton a “nasty woman.”

The presidential hopefuls didn’t shake hands at the start of the dinner, an Associated Press reporter tweeted.

Hillary Clinton and Donald Trump don’t shake hands or acknowledge each other as they sit for Al Smith dinner. 1 seat away from wan other

No interaction between Hillary Clinton and Donald Trump at #AlSmithDinner so far, despite taking the stage right after one another

Both are expected to deliver speeches later during the Alfred E. Smith charity dinner, which is typically a light-hearted affair that benefits Catholic charities. 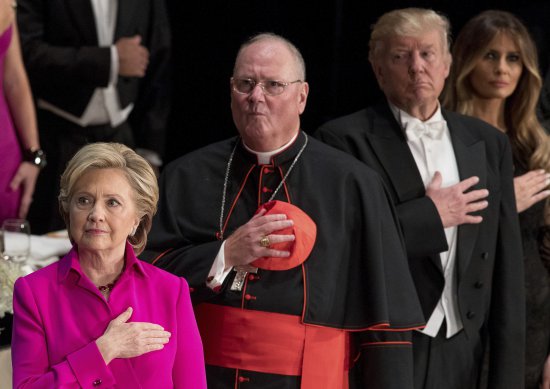