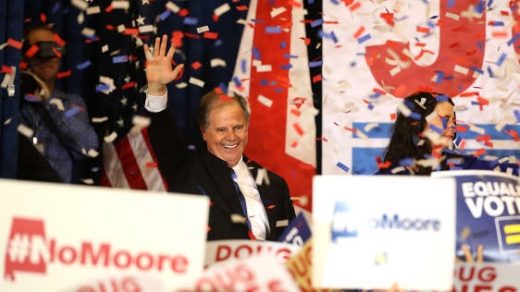 The Democrat Doug Jones has defeated Republican Roy Moore for the open Alabama Senate seat. Jones’s victory brings the GOP advantage in the Senate down to 51-49, which could have huge ramifications for Republicans trying to advance policy initiatives in the near future.

Almost from the time when returns began coming in shortly after 8 p.m EST Tuesday night, Roy Moore held a substantial lead in the race. But later, as returns from larger, more urban and suburban counties began coming in in waves, Jones pulled ahead, and the news services soon began calling the race for Jones.

Perhaps more than anything else, Jones’s victory in a deeply GOP state like Alabama gives Democrats an unexpected reason for hope that the country might be starting to reject the slash-and-burn political style and populist agenda of Donald Trump and his idealogical wingman Steve Bannon.

Trump attached himself to the Moore’s cause aggressively toward the end of the campaign. The president campaigned for Moore, and even recorded robo-calls for the candidate. Bannon, too, had been a fierce advocate of Moore, who appealed strongly to evangelicals in Alabama. Bannon said repeatedly in speeches that the race for the Alabama Senate seat was a referendum on Donald Trump.

The people of Alabama will do the right thing. Doug Jones is Pro-Abortion, weak on Crime, Military and Illegal Immigration, Bad for Gun Owners and Veterans and against the WALL. Jones is a Pelosi/Schumer Puppet. Roy Moore will always vote with us. VOTE ROY MOORE!

Jones’s victory may be a sign that GOP candidates may face serious challenges in the 2018 mid-term elections.

Ultimately it may have been Moore’s history of alleged sexual misconduct with minors and negative comments about women and minorities that did him in. Many Alabama voters make their political choices along moral lines, and the allegations may have swung just enough of them to collapse Moore’s chances.

In his victory speech, Jones made a point to thank the black, hispanic, and jewish communities that supported him. And he picked a good night to talk about a changing Alabama:

“Alabama is now at a crossroads, as we have been before, and too often we have taken the wrong road, but tonight ladies and gentlemen you took the right road,” Jones said.

He ended his comments with a quote from Dr. Martin Luther King: “As Dr. King said, the moral arc of the universe is long but it bends toward justice. Tonight ladies and gentleman, tonight in this time, in this place, you helped bend the moral arc a little closer to justice….”

Meanwhile, Moore refused to concede the race and demanded a recount late Tuesday night despite the fact that he trailed Jones by 20,000 votes or 1.5%. Reports said the (Republican) Alabama Secretary of State promptly denied Moore’s request. 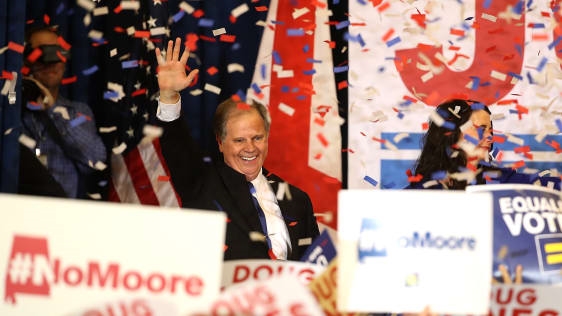