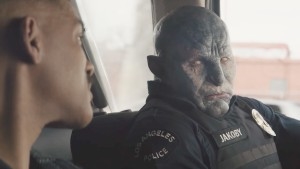 WHAT: The trailer for Netflix’s upcoming film, Bright, which puts fantasy world elements in a modern L.A. cop movie.

WHO: Director David Ayer and stars Will Smith and Joel Edgerton.

WHY WE CARE: Netflix has been putting out original movies for years now, but the company’s investment in major filmmaking is only starting to take hold. The last couple months have seen high-profile fare like War Machine, starring Brad Pitt, and Okja, a factory farming morality tale disguised as an adventure movie directed by Snowpiercer‘s Bong Joon Ho. The Irishman, Martin Scorsese’s return to the gangster milieu, is currently filming–with De Niro, Pacino, and Joe Pesci as leads–and will be on the streaming service next year, something that may have once been seen as unthinkable. Among these top-tier projects, though, is Bright, the high-budget fantasy cop movie Netflix won a fierce bidding war. Although we got a glimpse of the Will Smith vehicle during the Super Bowl, the first full trailer officially dropped today and offers a better idea of what those other studios were fighting to acquire.

Bright finds Will Smith back in quippy Bad Boys/Men In Black mode, though humbled a bit by his comparatively advanced age. He plays an L.A. cop who is partnered with an orc played by a completely unrecognizable Joel Edgerton. The plot concerns the appearance of a magic wand that may have devastating consequences for this weird world if it falls into the wrong hands. Most interestingly, though, the trailer reveals that all the fantasy elements in the film exist to turn it into a racial allegory. Hammering that point home, Edgerton’s orc is referred to as a “diversity hire,” while Will Smith jokes before attacking a tiny Tinker Bell-like creature, “Fairy lives don’t matter today.” While it’s kind of tough to buy into the idea that Fantasy Earth also had the Black Lives Matter movement, rendering this reference a wink to the audience, all in all, it’s interesting that a film about mythical creature cops would have more on its mind.

Bright is out on Netflix December 22.

Watch the trailer for “Bright,” a film in which Will Smith plays a cop in a Los Angeles populated by orcs and other fantasy creatures–metaphors abound.

WHAT: The trailer for Netflix’s upcoming film, Bright, which puts fantasy world elements in a modern L.A. cop movie.