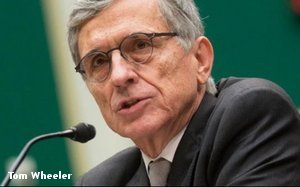 Cable and satellite providers will have to make television programs available to subscribers via apps, under a new proposal put forward Thursday by Federal Communications Commission Chairman Tom Wheeler.

If the FCC passes the proposal, consumers will no longer have to rent set-top boxes from their cable companies, at an average cost of $231 a year, in order to watch TV. Instead, most cable and satellite subscribers will be able to watch programs on smartphones, tablets and other devices.

“These rules will open the door for innovation, spurring new apps and devices, giving consumers even more choice and user control,” Wheeler said today in an op-ed published in the Los Angeles Times.

The apps plan comes more than eight months after Wheeler unveiled a more sweeping proposal for regulations that would enable Google and other companies to develop set-top boxes that could access pay-TV programs. That original plan was supported by the White House and consumer groups. But the potential regulations met with strident opposition from cable companies, as well as content providers and the ad industry.

The new version of the plan would require large providers (collectively accounting for more than 90% of subscribers) to offer apps within two years, and medium-sized providers to do so within four years. Providers with fewer than 400,000 subscribers will be exempt.

The new proposal also requires cable and satellite providers to provide apps for popular platforms, including Roku, Apple, iOS, Windows and Android, according to material released today by the FCC. In addition, cable and satellite providers would have to let consumers record programs for later viewing, provided that those companies offer that function in their set-top boxes, a senior FCC official told reporters Thursday.

The FCC also said Thursday that the rules will require “a standard license governing the process for placing an app on a device or platform.”

“A standard license will give device manufacturers the certainty required to bring innovative products to market,” the agency said on Thursday. The FCC adds that the license won’t affect any contracts between programmers and cable providers.

The organization Incompas (formerly Comptel), which includes Google and Amazon as well as some broadband providers, praised Wheeler’s latest proposal, as did the consumer advocacy group Public Knowledge.

“With this action, the Commission could save consumers billions of dollars a year. Under the Commission’s plan, consumers would be able to access their TV subscriptions on any device, and in many cases on devices they already own,” Public Knowledge senior counsel John Bergmayer said in a statement.

But the cable industry group Future of TV Coalition said Thursday that it opposes the FCC’s revised approach. “Like the original mandate, this new scheme would violate copyright law and destabilize the programming ecosystem by depriving creators and distributors of the ability to control their work and limiting the options consumers will be able to enjoy,” the group wrote on Medium.

The Future of TV Coalition particularly criticized the component of the plan that requires new licensing arrangements. “When this proceeding first started, advocates claimed it was needed to bring consumers new choices and save them money on monthly rental fees,” the group wrote. “But apps can quickly accomplish this without the need for some ill-defined, indefinite, and unaccountable third-party licensing body.”