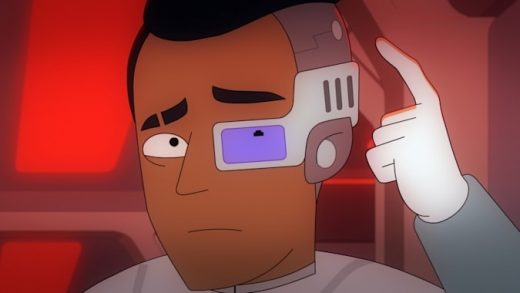 Just a bunch of professionals doing their job.

Last week I posited that seasons one and two of Lower Decks together would make up one story arc of the show. Given this week’s finale, it looks like we’ll be dealing with the consequences of the Pakled threat for just a bit longer. But when an episode is this good, I’m perfectly fine with being wrong.

Especially when this installment just encompasses so many of my favorite things about Star Trek. It’s not just the delightful appearance by Captain Sonya Gomez — you might remember her as the ensign who spilled hot chocolate on Captain Picard way back in season two of The Next Generation. And it’s not because of the first on-screen appearance of cetacean ops, a concept hinted at in various blueprints but never actually mentioned with any real seriousness.

The first two seasons haven’t always showcased the crew at their finest. We’ve seen Boimler and Mariner lose the Klingon diplomat they were supposed to be escorting, Freeman get into a pissing match with the captain of another Starfleet vessel, and the crew fail its (rigged) assessment test spectacularly. At times the show is very much like The Office, more interested in the personal lives and antics of its employees than the actual business at hand.

However, even The Office would occasionally remind you that the staff of Dunder Mifflin were good at their jobs, particularly Michael Scott. Michael was a terrible manager, but one hell of a salesman. And this episode of Lower Decks put the spotlight on Carol Freeman, whose fine work over the past two years is being rewarded with a promotion to a better ship. The USS Cerritos is a California-class ship, a real workhorse of a vessel that doesn’t get a lot of respect. That the Cerritos even became important at all is completely due to circumstance in encountering and surviving the newly empowered Pakleds. But it’s given Freeman a lot of time in the spotlight, with her tasked a few episodes ago with negotiating a cease-fire with the Pakled government. (It was a ruse, but that’s not her fault.)

Last week I thought this episode would wrap up that storyline, given that we now know the Pakleds were getting help from a Klingon captain, one who is no longer alive thanks to the actions of a lower-decker. Instead, this episode focuses on Freeman’s possible promotion, her senior staff’s reaction to it, and the futures of our lower decks ensigns.

This is all happening against the backdrop of a first contact mission. The USS Cerritos mostly specializes in second contact missions — we’re told this in the very first episode. That means they come in and handle all the annoying administrative stuff after flagships like the Enterprise come in and establish initial relations. Now, the Cerritos gets to take part in the more important first impression, but only as backup to the USS Archimedes.

Sitting on the bench ends up serving the Cerritos well when a solar flare plus an unstable planetoid ends up disabling the Archimedes and putting it on a crash course with the planet below. Freeman is ready to sacrifice herself in order to save the other ship, but Rutherford and company have a better plan, one that can prevent fatalities on both vessels. But they’ve only got 20 hours, so the whole crew has to chip in. That means Ransom piloting, Billups supervising the hull removal, and Tendi giving Mariner a much-needed pep talk. The latter might not be necessary to the functioning of the ship, but it is important to the show because it pushes the two women toward the emotional resolution they need.

We also get to meet the crew of cetacean ops, two beluga whale lieutenants named Kimolu and Matt. But it’s Boimler who has to save the day, because the clamp they need to release isn’t made to be turned by flippers. (I really appreciate the accessibility joke here, because Starfleet has often been cited over the decades as an OSHA nightmare.) Needless to say, the crew succeeds (this isn’t a movie, after all, so we’re not losing the ship). After the bravery shown by the entire crew of the Cerritos, particularly Boimler and Rutherford, it’s hard to imagine that season three won’t start off with a few promotions.

But first, there’s the matter of Freeman’s transfer, which she has decided to decline in favor of staying with a crew that has proven itself capable of being truly excellent. Unfortunately, that Pakled storyline comes to bite us all one more time, leading us into the show’s very first cliffhanger, and the very first season-ending cliffhanger in the new Kurtzman-era of Trek programs.

Star Trek: Lower Decks had a lot to prove when it debuted last year: It was the first animated show since the ‘70s, and the franchise’s first attempt at a primarily comedic series. It also had to overcome the initial impressions of it as being akin to Rick and Morty or Family Guy. The quality of the first season started a bit rough but improved as time went on, ending on the fantastic action-packed episode, “No Small Parts.” Season two’s “First First Contact” ups the game in several ways, not just in its element of danger but also in how the show is willing to use big storylines to push the characters forward as the seasons progress. 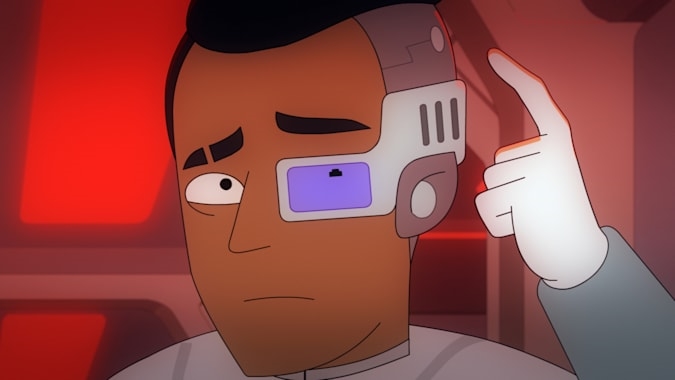