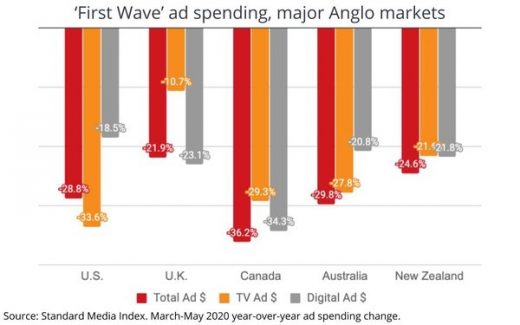 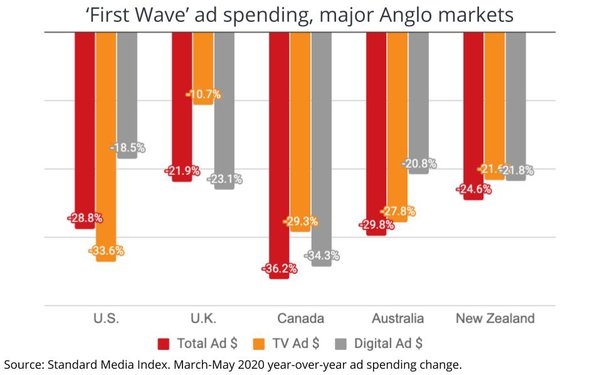 Ad spending plummeted 28% across the major Anglo media markets — the U.S., U.K., Canada, Australia and New Zealand — during the first wave of the COVID-19 pandemic, according to a unique analysis released today by Standard Media Index.

The analysis, which compares the year-over-year change in ad spending for March through May 2020 vs. the same period in 2019, happens to be representative of the major markets SMI has already rolled out in.

It also reveals that despite talk about the relative flexibility of digital advertising buys, big advertisers handled by the major agency holding companies were quick to put the brakes on their TV ad spending in the U.S., and much less so in the U.K.

The data also reveals that Canadian advertisers were most aggressive in disrupting their digital ad spending vs. TV.

The U.K.,conversely, was the most stable of the major Anglo nations, with total ad spending falling 21.9%.

While SMI did not release discrete category-level data, the company said the pharma category was the only major one to show significant ad spending increases in the U.S., and travel was down most severely across all the nations tracked.

SMI also indicated that U.S. ad demand is may have bottomed out, with ad spending in June “falling just 20%,” though it also did not release precise figures for that month yet.