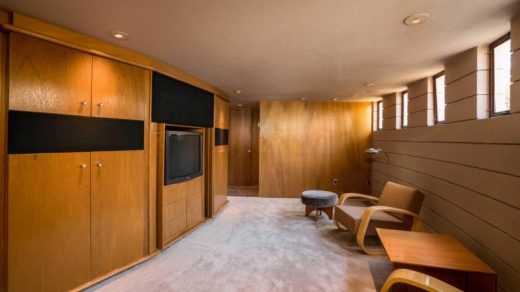 Throughout the late 19th and 20th centuries, Frank Lloyd Wright’s architectural designs came to define the American landscape, a distinction that still holds true today. Over the course of his storied career, the architect built everything from private homes to public pavilions; in total, Wright designed approximately 425 structures.

On October 16, the Norman Lykes House, Wright’s last residential design, will be on sale at auction. The Phoenix, Arizona, home is being sold without reserve by Heritage Auctions and will have no minimum starting bid.

“A late Frank Lloyd Wright house in such impeccable condition is truly a treasure,” Nate Schar, director of Luxury Real Estate for Heritage Auctions, said in a statement. “Bidders will have the opportunity to not only buy this incredibly livable mid-century modern home, but also to own the final masterpiece from the most iconic American architect.”

The 3,095-square foot, 3-bedroom, 3-bathroom contemporary estate is located on over 1.3 acres near the Phoenix Mountains Preserve in Palm Canyon. The curvilinear house—one of only 14 circular dwellings designed by Wright—blends into its mountainside location, thanks to the use of hand-carried concrete blocks. “The Norman Lykes house was greatly influenced by Wright’s fascination with geometry in his later years. Curved lines in the home playoff the curves of the Phoenix Mountains, and the cantilevered roof line provides natural shade on the south facing façade. The windows never see direct sun, yet the house is light and bright,” Brent Lewis, director of Design for Heritage Auctions, said in a statement.

The single-family residence, also known as the Circular Sun House, was designed in 1959 and completed in 1967 by architect and Wright apprentice John Rattenbury after Wright’s death. The two-story home has only been on the market once before, and still holds all of its original, custom-built furniture. “Hallmark design elements of Wright can be seen in the extensive Philippine mahogany woodworking and built-in furniture, and in the fine details like the ventilated staircase and the show stopping circular fireplace,” Lewis said.

The house also boasts a crescent-shaped swimming pool (luxuriously lined with mother of pearl), carport, and central heating and air-conditioning.

When the Lykes family sold the house in 1994, it featured five bedrooms and three bathrooms. But the following buyer commissioned Rattenbury to renovate the interior by collapsing the five bedrooms to three larger ones. Other updates, like turning the original workshop into a media room, were made as well, in cooperation with the Frank Lloyd Wright Foundation.

Not all Wright homes have received that level of attention. Buying a Wright home can be a complex, long-term project, as the Wall Street Journal reported; as these homes pass from owner to owner, it’s inevitable that they’ll need to be renovated and updated to withstand the passage of time. Bidding begins on October 16, and you can follow online here. 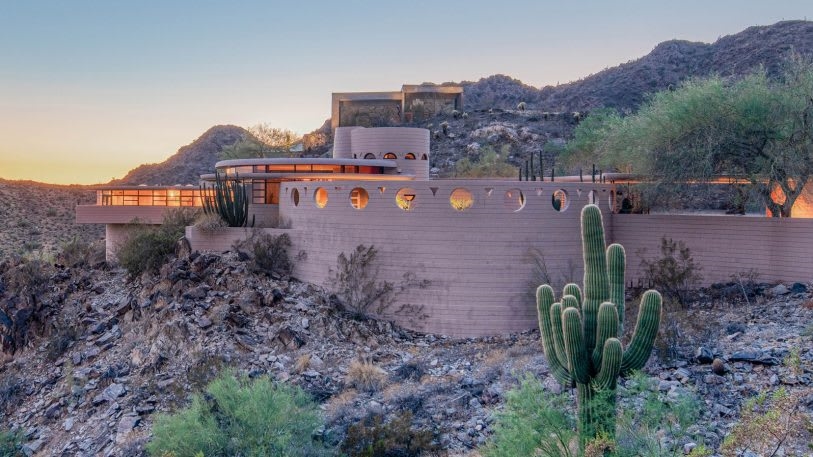 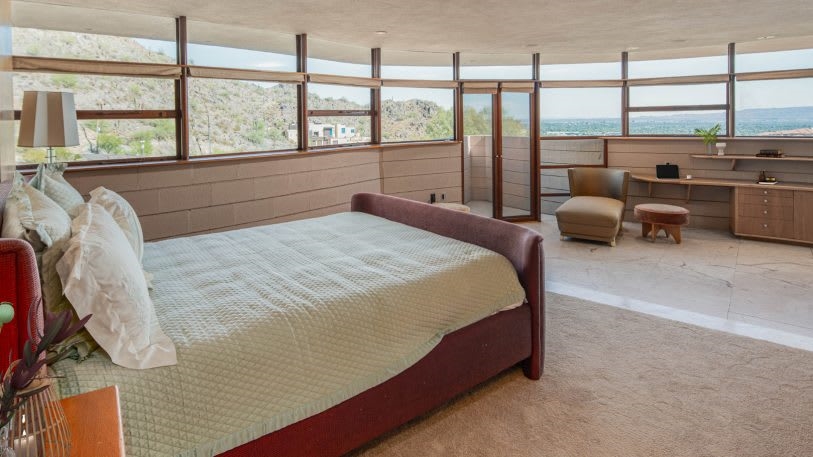 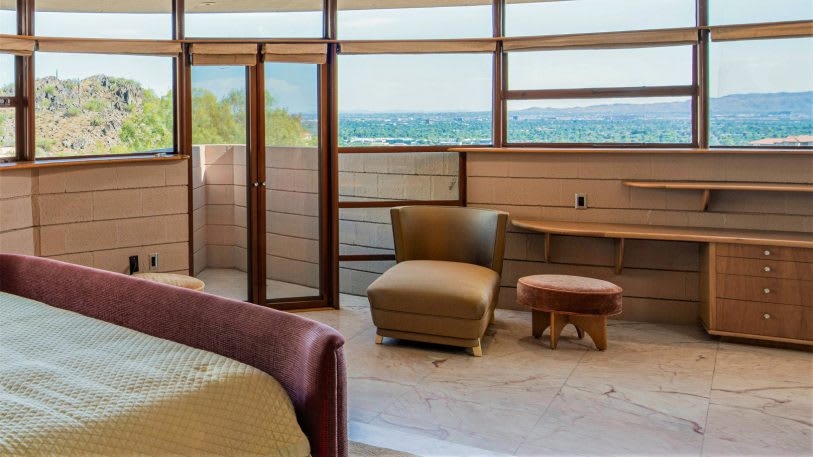 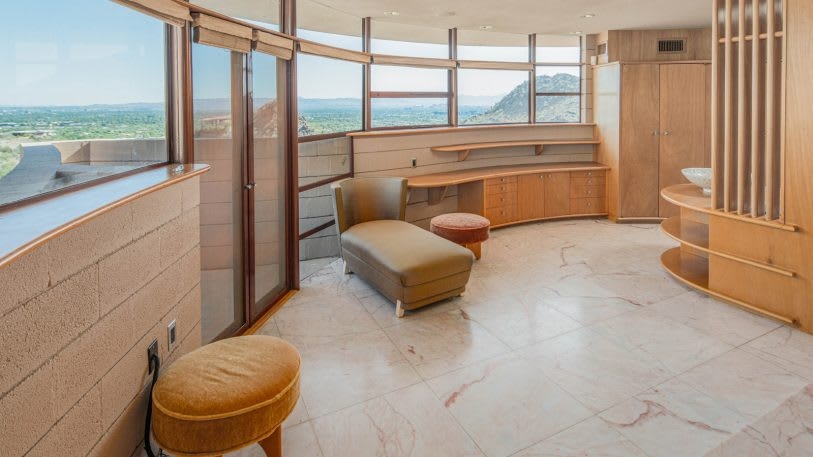 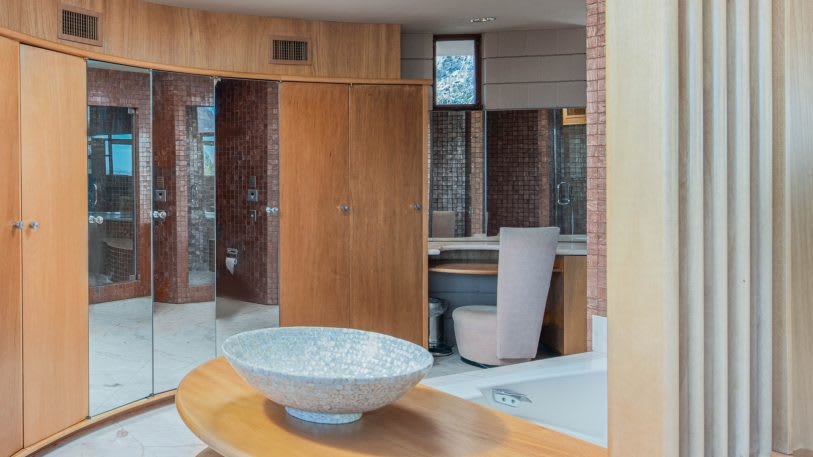 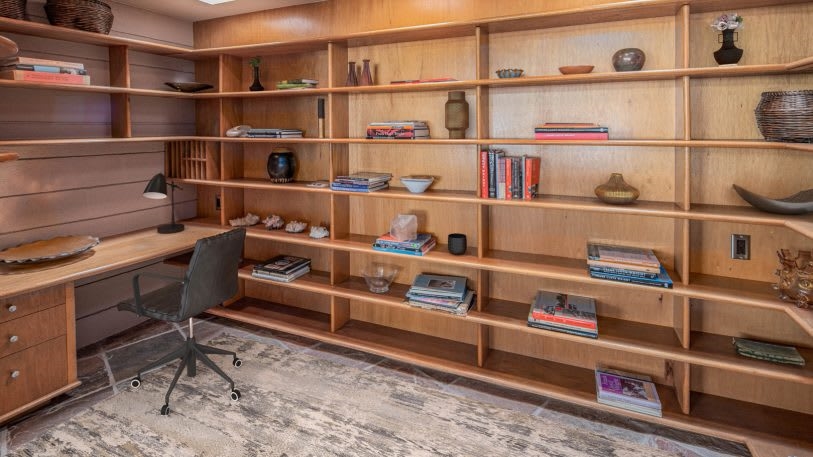 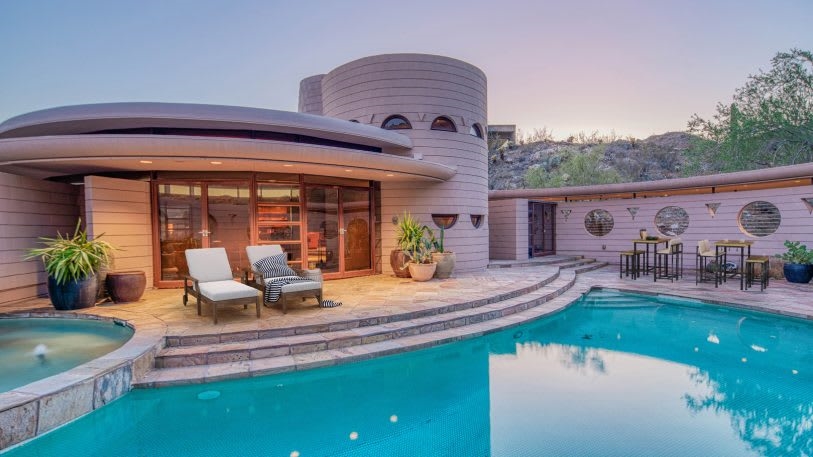 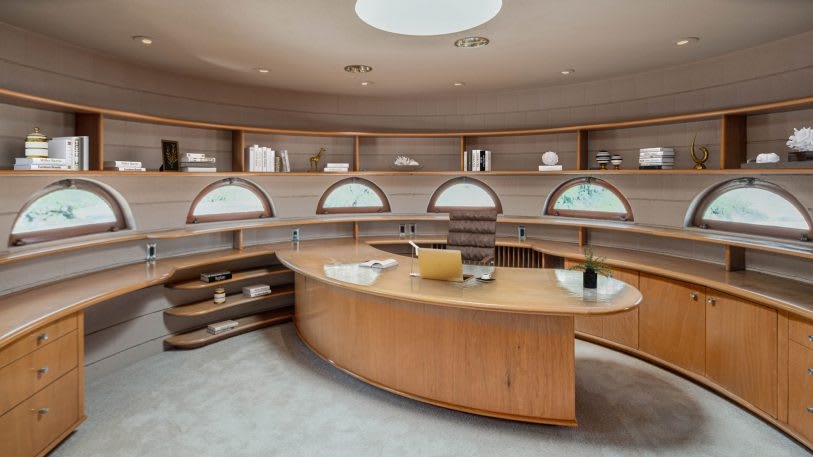 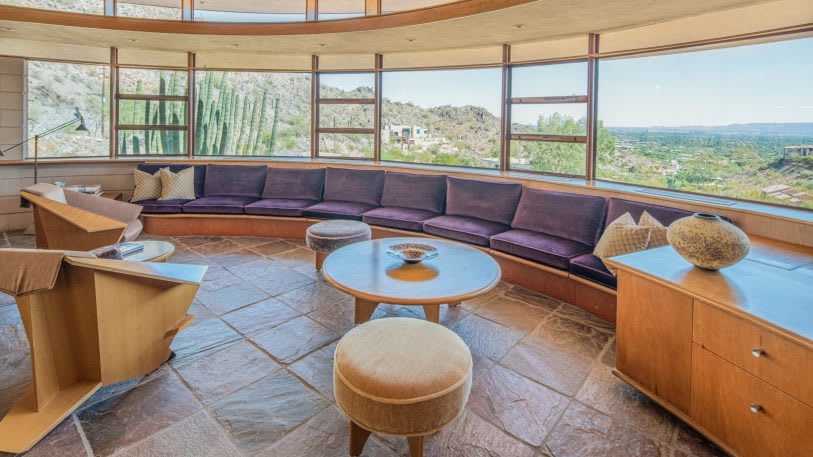 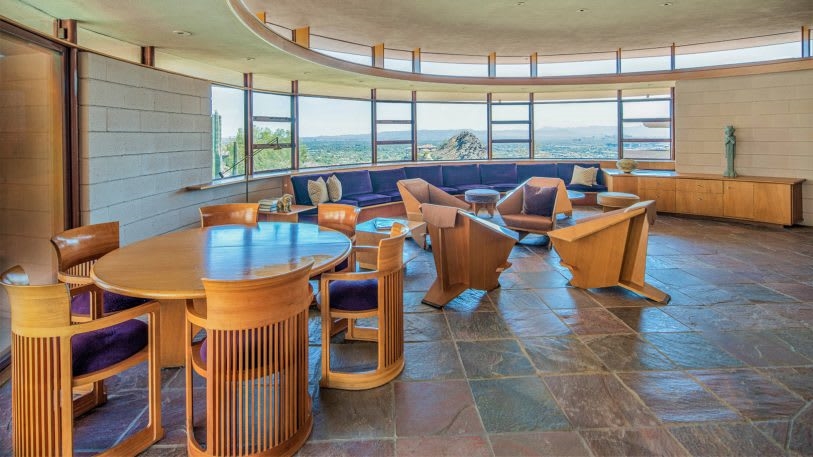 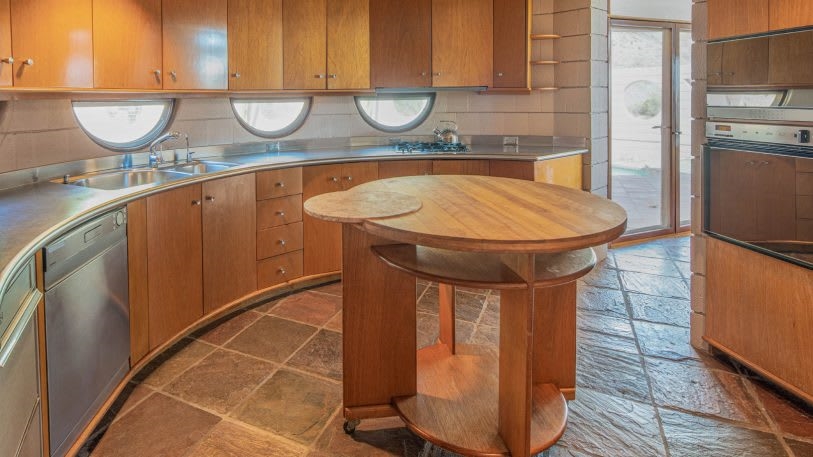 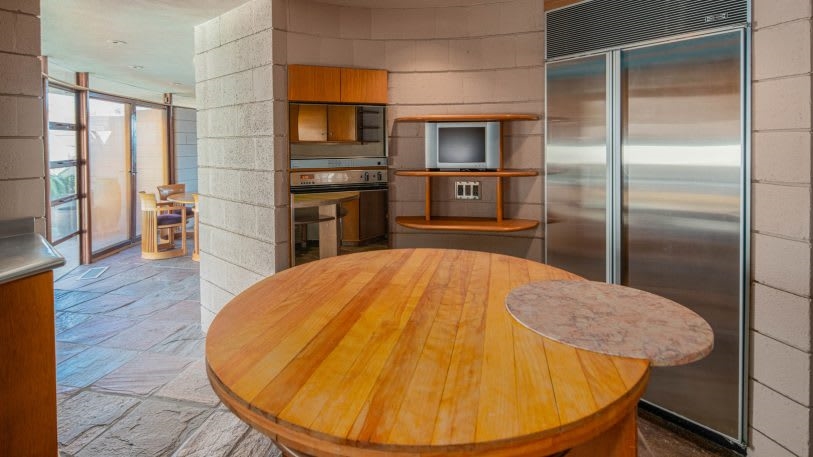 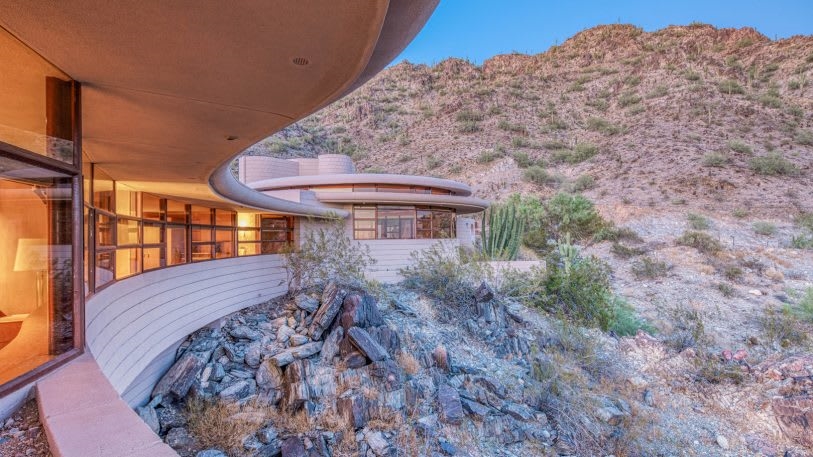 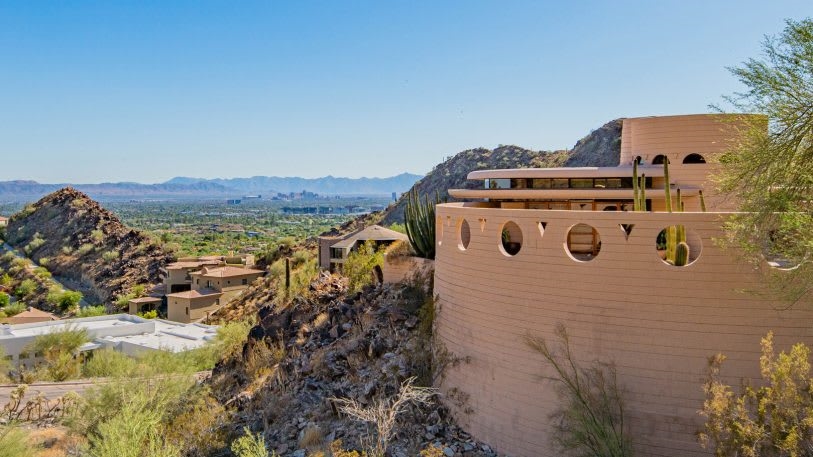 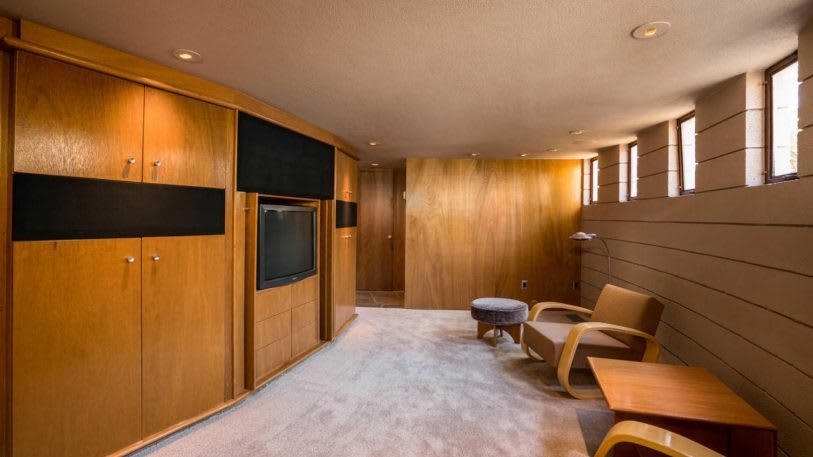