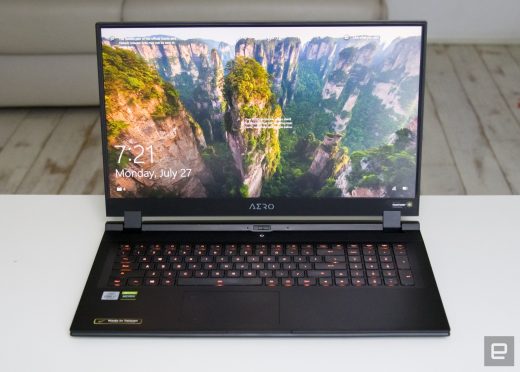 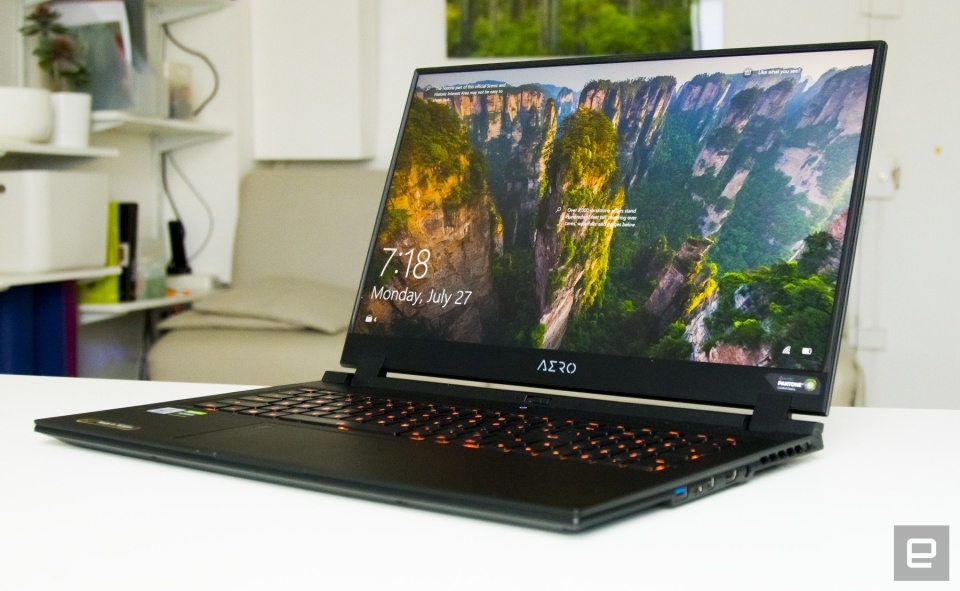 With its Aero lineup, Gigabyte has developed a reputation for powerful, slim, long-lasting laptops with low-key designs that don’t scream “gaming.” The $2,800 Aero 17 HDR XB is a great example of that philosophy — it has plenty of power but is more aesthetically restrained than rival models from Razer, Alienware and ASUS.

It packs a 17.3-inch, HDR400 screen that’s brighter than nearly any other laptop. The configuration I tested also has Intel’s latest 8-core i7-10875H processor, NVIDIA GeForce RTX 2070 Super Max-Q graphics and 16GB of RAM. With all that, it should make for an ideal entertainment and content-creation machine, with a slice of gaming on the side.

The Aero 17 HDR is 21mm thick and weighs 5.9 pounds — both a bit thicker and heavier than the average in this category. Combined with a chunky 1.2-pound power adapter, that makes for a lot of weight in your bag if you travel a lot with your laptop. By contrast, MSI’s GS75 Stealth 9SG has similar components but is just 18.9 mm thick and weighs 5.1 pounds. However, it hits that weight with a much smaller 80 Wh battery, compared to 94 Wh on the Aero.

The key feature on this laptop is right in the name — the 4K HDR display. When you flip it into HDR mode, there’s no question that it’s extremely bright. In fact, the 60 Hz AUO panel averages 475 nits of brightness, brighter than most laptops save a few — most notably, the incredibly bright 500+ nit Dolby Vision panel on the 2020 Dell XPS 17.

The Aero 17 HDR also has X-Rite Pantone certification with a Delta E of less than one and 86 percent DCI-P3 coverage — specs that again, few other laptops can boast. All that together makes it a great choice for creative work in Photoshop, Adobe Premiere Pro CC, Lightroom, Davinci Resolve 16 and other apps.

I edited a camera review video on this laptop using Davinci Resolve and Lightroom CC classic, and it absolutely flew. It was excellent when it came to color accuracy, as I was able to depend on the image I was seeing for color correction and other chores. I also edited in dual-screen mode using a calibrated, $4,000 ASUS ProArt PA32UCX and the colors matched up very closely.

Thanks to the high-end CPU and GPU combo, it also worked very quickly for editing native H.264 video from Sony ZV-1 and Panasonic GH5s cameras on Resolve 16. It was equally fast while exporting H.264 format and H.265 for YouTube uploads. For example, I was able to export a 4K video in the H.265 format in less than real-time, or about seven minutes for an eight-minute show. On Lightroom CC, TIFF, PSD and JPEG exports were incredibly rapid.

As with any laptop in this category, ventilation is a crucial part of the design. The Aero 17 HDR has dual 80 mm fans and five heat pipes, along with large fans on each side. While that kept things relatively cool during gaming and video editing, the fans can get pretty loud — perhaps a touch more than other laptops in this category. It can also get very hot on the bottom, so gaming with one on your lap isn’t a great idea.

As usual for Aero laptops, the Aero 17 HDR has tons of ports, including an SD UHS II (but not UHS III) card reader, three USB 3.2 Gen1 Type A ports, ethernet, microphone, headphone, HDMI, USB-C/Thunderbolt 3, mini DP1.4 and HDMI 2.0. They’re all positioned toward the front of the laptop, unfortunately, so cables can get in the way of a mouse.

The keyboard and trackpad are a bit of a mixed bag. The keyboard felt good during gaming and touch-typing, if a little on the spongy side. As you’d expect on a 17-inch laptop, though, the key spacing is excellent for touch typing and productivity work.

As with other Gigabyte Aero laptops I’ve tried, the Aero 17 HDR XB’s touchpad is offset a bit right from center, so I occasionally mis-clicked or right-clicked instead of left-clicking. Otherwise, however, I found it to be smooth and accurate. It also has an integrated fingerprint reader that’s handy for logging in.

As for other features? Sound-wise, the speakers lacked bass, which I really noticed after testing the ASUS Zephyrus 15 Duo’s excellent audio setup. Naturally, the Aero 17 HDR has a light-up keyboard and macro keys for gaming via Gigabyte’s control center. And finally, there is the webcam — a key component in this COVID-19 era — that is tucked onto the laptop chassis itself because of the tiny bezels. That means it’s pointed up at your face, which is not the most flattering view. It does have a slider that blocks the camera’s view, however, which is a nice touch.

The snappy feel is confirmed by objective tests, with the fastest Handbrake 4K transcoding speeds (eight seconds to encode a 1:02 4K movie trailer into 1080p) I’ve seen, and disk read/write speeds up to 2.93/2.59 GB/s.

If you’re interested in getting the Aero 17 HDR, I’d upgrade the RAM to 32GB and add a second NVMe SSD, as 16GB of RAM and a single SSD won’t cut it for video editing. Luckily, there are free M.2 and RAM slots, so that’s relatively easy to do yourself if taking the back cover off doesn’t intimidate you.

The HDR screen is ideal for entertainment, letting you watch Netflix HDR or Amazon Prime Video movies without the need for an external screen. As I’ve seen before, however, HDR is still extremely broken on Windows 10 — an issue that Microsoft, NVIDIA and Intel need to address if they’re serious about HDR adoption.

Netflix only works in HDR on the Windows universal app or Microsoft Edge, and not on Chrome, Opera or Firefox. I was only able to get Netflix to work properly using Intel’s integrated graphics driver, as HDR video refused to load on the Aero 17 HDR using NVIDIA graphics. Once again, I failed to get YouTube 4K HDR video to play on Chrome or Edge without skipping, no matter what I tried.

Once I finally got Netflix to work, it did look a bit more colorful and brighter with HDR than without. As usual on a PC with HDR 10, however, there’s very little difference unless you’re really looking for it. In sum, while I appreciated the extra brightness of the display for gaming and creative work, the HDR feature isn’t very useful for entertainment as it stands now.

Those figures are obviously less than I saw with NVIDIA’s RTX 2080 Super Max-Q graphics on the ASUS Zephyrus Duo 15. However, the Aero 17 HDR XB is very competitive with other laptops at this cheaper price point — especially if you like gaming in 4K. Also, this is one of the few laptops you can game on in HDR without an external monitor. Unlike with movies, the HDR worked well for Shadow of the Tomb Raider and other games, making them notably brighter, clearer and more colorful.

You’ll never see incredibly long battery life on a 4K laptop, especially one with an 8-core CPU and high-end GPU. Next to other 4K laptops, however, this model does pretty well. In our 1080p movie rundown test, it lasted 6 hours and 30 minutes on a charge. That’s about half what Dell’s XPS 17 with a 4K touchscreen can do, though the Dell model we tested had a less capable NVIDIA RTX 2060 Max-Q GPU. The Aero 17 HDR does beat most pure 4K 17-inch gaming laptops in battery rundown tests because of the larger, 94 Wh battery.

Dell’s Alienware M17 R3 gaming laptop might be your best alternative bet, as it offers a faster 8-core i9-10980HK CPU, RTX 2070 Super GPU, 32GB of RAM, a 500 Nit display and a total of 1.5 TB of NVMe storage for $2,950. I’d also strongly consider Dell’s $2,850 XPS 17 laptop — though it has less graphics grunt, you get a brighter HDR touch display that’s potentially more useful for entertainment thanks to the Dolby Vision support.

All told, Gigabyte’s Aero 17 HDR XB model has plenty of power for video and photo editing (and some gaming), along with a bright and accurate 4K HDR display. It has a decent keyboard and trackpad, and while it’s a bit heavier and thicker than other similar models, it has a bigger battery that lasts longer than most of them — a tradeoff I’ll take any day. The main drawbacks apart from the size are a poorly positioned webcam and below-average speaker quality. Still, it’s a unique laptop in this category and offers a price and performance combination that’s hard to top. 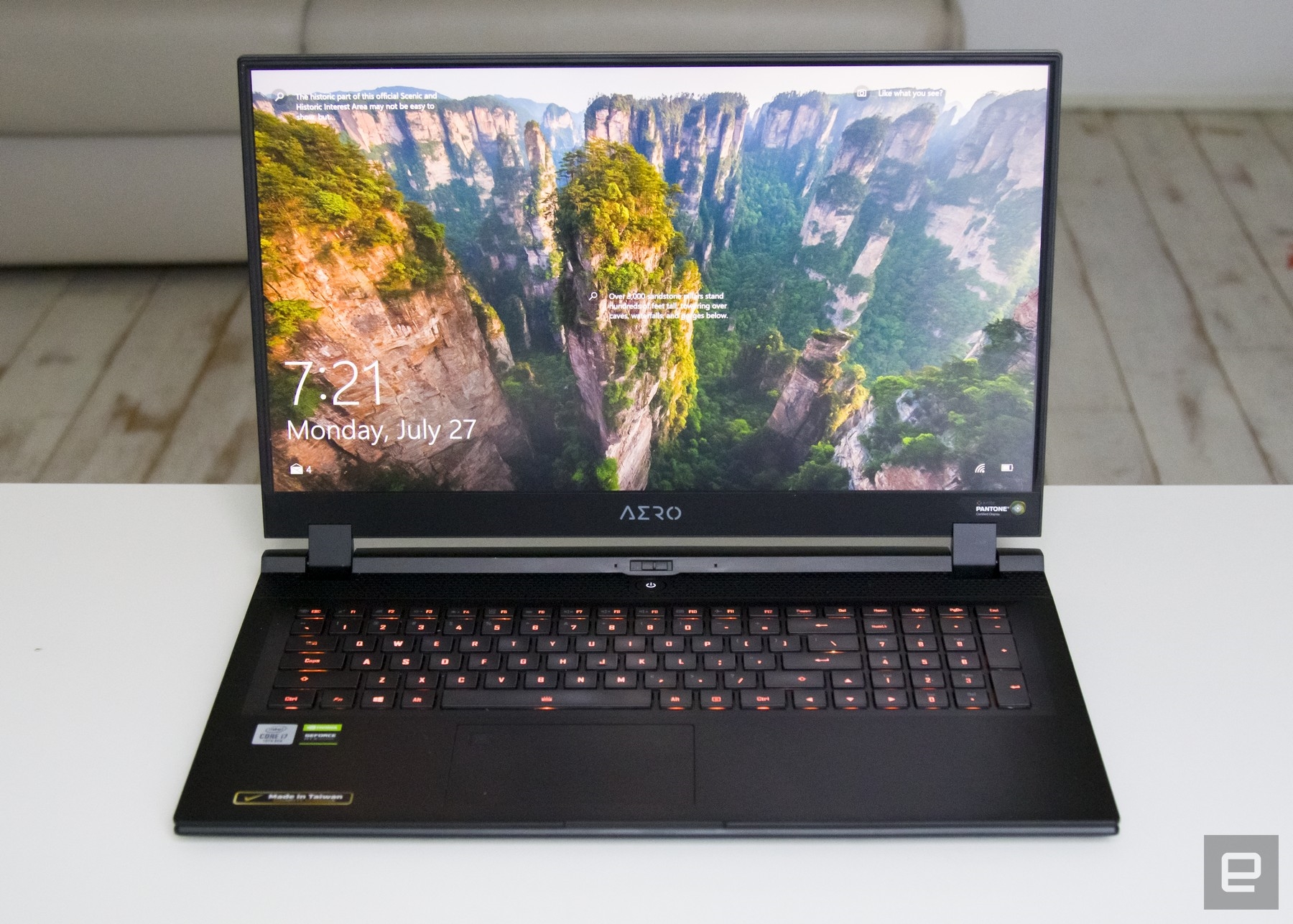