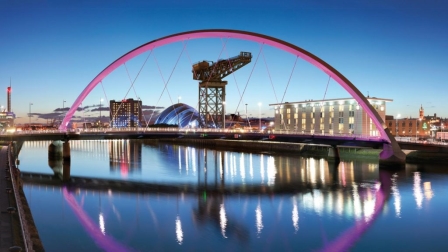 A consortium of communication firms revealed their intentions to build a nearly five square mile Internet of Things (IoT) network in Glasgow at the recent Mobile World Congress Shanghai.

All businesses are able to use the build systems using the IoT network. In the reveal at MWC Shanghai, the consortium said environment monitors, healthcare devices, and valuable asset tracking could all work on the network.

Since revealing plans to build the network, the consortium have been able to make the network even more power efficient. Devices can now use location services without requiring more battery power, which could lead to deployment of low-power sensors across Glasgow to track the environment and traffic.

Glasgow network will scale for all kinds of businesses

Steam Technologies CEO, Nigel Chadwick, said the network is massively scalable for businesses of all sizes. Businesses can start “with just one or two devices, and scale up to the point where they have hundreds, or even thousands, of connected Things.”

The consortium said Glasgow was the perfect city to test the network, since it has a mixture of older structures and newer urban environments. Glasgow also has a grid system similar to the U.S., which could prove useful if the consortium pushes its network into American cities in the future.

Investment from multinational tech companies could surge with the new IoT network, according to local newspaper the Scotsman. It could even turn Glasgow into a tech hub alternative to London, which might lose some of its investment as Britain leaves the European Union.