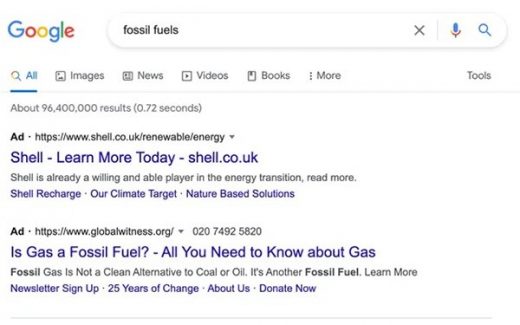 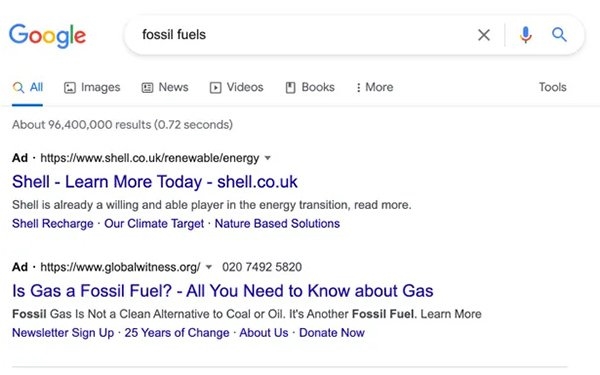 It appears that fossil-fuel companies and the firms they do business with are fighting for attention from consumers. Despite the promise by automakers of a transition to electric vehicles, these companies are among the biggest spenders when it comes to Google paid-search ads. Some call this an example of “endemic greenwashing.”

The Guardian, a U.K. media outlet, analyzed ads served on Google search results for 78 climate-related terms, in collaboration with InfluenceMap, a think tank that tracks the lobbying efforts of polluting industries.

The results, which appear to be focused in the U.K., show that more than one in five ads seen in the study — more than 1,600 in total — were placed by companies with significant interests in fossil fuels.

ExxonMobil, Shell, Aramco, McKinsey, and Goldman Sachs were among the top 20 search advertisers, while a number of other fossil-fuel producers and their financiers also placed ads, The Guardian reports.

“The oil and gas sector has moved away from contesting the science of climate change and now instead seeks to influence public discussions about decarbonisation in its favour,” wrote Jake Carbone, senior data analyst at InfluenceMap.

He believes Google allows groups with a vested interest in the continued use of fossil fuels to influence the results people receive when they try to educate themselves by conducting online searches looking for information.

Major oil company Shell had 153 ads and, specifically, appeared on 86% of searches for the term “net zero.”

Goldman Sachs, which facilitated nearly $19 billion of lending, according to Capital Monitor, to the fossil-fuel industry in 2020, had the third highest number of ads. Its ads appeared on almost six in 10 searches for “renewable energy,” according to The Guardian.

The group also analyzed “snippets,” not paid-for but pulled into search results by Google’s algorithm as the most relevant result. The Guardian found the snippet chosen for “fracking” linked to the website of an oil and gas lobby group, the Independent Petroleum Association of America.

In October, Google said it would stop funding media websites and ban advertisements that contradict scientific consensus on climate change. The ban went into effect in November. It applies to advertisements as well as websites and YouTube videos that run Google ads and includes any content that denies human contributions to global warming or treats climate change as a hoax or a scam.

The policy — which applies to all advertisers, including energy companies and financial institutions — initially applied to YouTube publisher and creator monetization tools, and then to all of Google’s advertising AdSense and Google ads. It began to take effect in early December.

Google’s policy does not apply to ads or content monetization focusing on public debates about climate policy, discussion of solutions, the real effects of climate change, new research, constructive conversations or coverage of climate change-related topics.

One in five ads served on Google search results for 78 climate-related terms were placed by firms with strong interest in fossil fuels, a study finds.
MediaPost.com: Search & Performance Marketing Daily