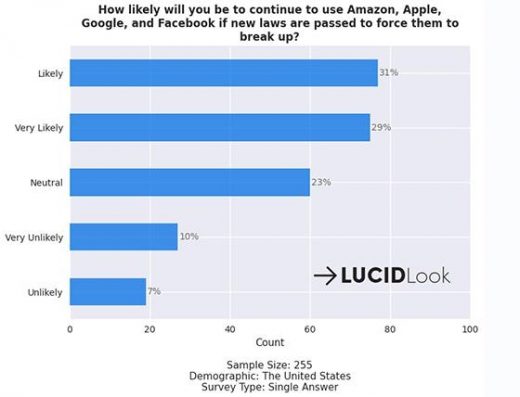 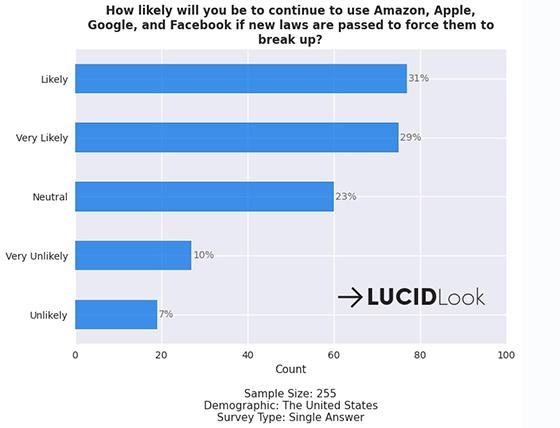 Google Chrome is one target of U.S. federal and state prosecutors for alleged antitrust violations, and they are also looking at Google’s advertising, mapping and search businesses.

The House Judiciary Committee released a report last week urging the breakup of several high-profile U.S. technology firms, but it found that Google Chrome’s market share allows the company to “effectively set standards for the industry.”

Prosecutors could force Google to sell its Chrome browser and parts of its advertising business, according to one report.

How will consumers react to a breakup? Lucid, which provides a polling platform, asked consumers about their overall thoughts on the fed’s actions and found that 70% said they view Apple, Amazon, Facebook, and Google as monopolies. The remainder said “no.”

About 56% of those participating in the study said the recent news about the monopoly adversely affects their views of Apple, Amazon, Facebook, and Google.

Google’s struggle is reminiscent of Microsoft’s monopoly 2001 case in which the U.S. government accused the Redmond, Washington company of illegally maintaining its monopoly primarily through restrictions put on PC manufacturers and users to uninstall the browser Internet Explorer and use other programs such as Netscape and Java.

The Department of Justice also reportedly is preparing a separate antitrust suit accusing Google of abusing its control on the online search market, which could be filed as soon as next week.

The Subcommittee on Antitrust, Commercial and Administrative Law, which brought about the recommendations for the breakup, has a Democrat majority.

The feds’ report suggests some there has been some pushback from Republicans, because the draft’s recommendations with regard to the breakup of the companies are too sweeping.