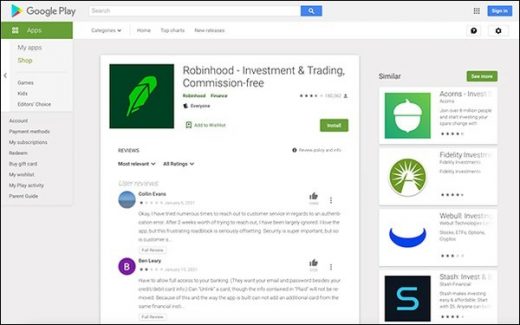 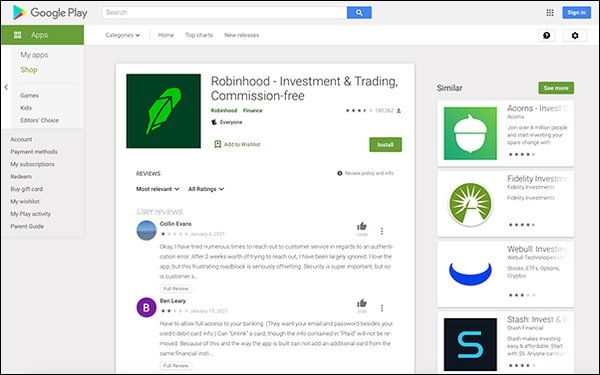 Users of Robinhood expressed their anger by leaving negative reviews on the PlayStore app, after the online brokerage firm shut down trading in the middle of the day. Investors were executing something called a short squeeze. Apparently, it made traders rich and cost Wall Street billions.

It appears Google came in and wiped the rating slate clean.

Robinhood, which blamed SEC regulations, put a temporary halt on trading on GameStop and other stocks by prohibiting the purchase of shares. App users were upset at their inability to freely trade the stock, despite the brokerage firm reopening with some restrictions on Friday.

Stock traders felt Robinhood had succumb to the wishes of the market and that the company acted to protect Wall Street insiders at the expense of the little guy.

Thousands flooded Robinhood’s Google PlayStore app listing with negative reviews. The 100,000 poor reviews in which users expressed their outrage transformed the 4.3 star rating into a one-star rating for the app.

Just a few hours later, the number of reviews of Robinhood dropped from around 275,000 to just 175,000, after virtually all of the recent negative reviews disappeared, restoring the app’s high rating.

Did Google delete thousands of one-star reviews? One spokesperson confirmed that the company did delete the reviews based on Google’s reviews guidelines, which brings into question how and when app users or consumers who purchase products can give their honest opinion of a product and how the company operates.

Google has systems in place to detect spam and abuse of it in app review systems, including detecting coordinated or inorganic reviews, a spokesperson said.

“We want trustworthy reviews in the Play Store,” the spokesperson said. “To be extra clear – we only take action on reviews found to be inauthentic or in violation of our policies. For example, you can see many one-star reviews from the past 24 hours on Robinhood’s app page on Google Play.”

Google does have policies to prohibit users from leaving reviews that manipulate the rating of PlayStore Apps.

Google has public guidelines that outline its policy on app reviews and comments. For example, one policy is not to post fake reviews intended to boost or lower ratings. It’s not clear how many or whether or not those reviews were fake.

Despite the removal, Google makes it clear that developers do not have the ability to remove reviews and Google’s developer policies strictly prohibits any attempt to influence their app’s rating.

App users have already filed a class action lawsuit against Robinhood for what some believe were unjustified restrictions on their right to trade.