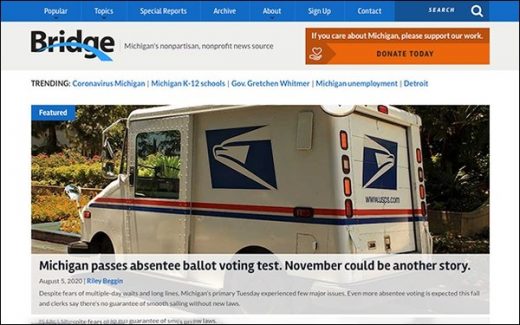 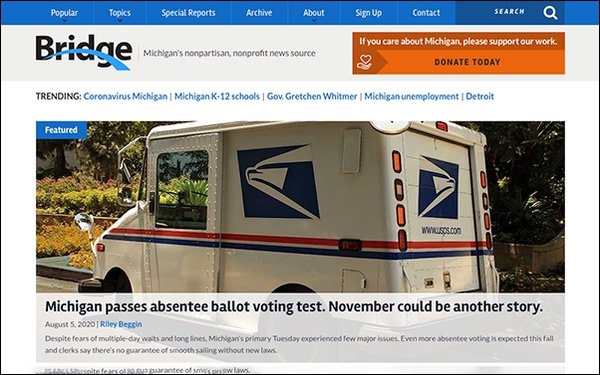 This week, the Google News Initiative formally wrapped up its GNI Audience Lab, a multi-month program created in partnership with News Revenue Hub to work with local news outlets looking to create new paths towards audience growth and revenue.

Today, one of the Lab’s participants, non-profit newsroom Bridge Michigan, recounted its success with the lab and how it was able to turn a COVID-19 traffic bump into a new source of paying readers.

During the early days of the pandemic in March, Bridge Michigan’s traffic rose to 3.75 million unique users, with April delivering 3.4 million. The site’s previous monthly record for unique users occurred in November 2018, when the site recorded 380,287 unique visitors. The March influx of readers was equal to more than the site’s previous two years visitors combined.

The key was to figure out how to turn these new audience numbers into a revenue source to sustain the site.

“While our overall traffic started to recede in the months following our record March, our loyalty metrics, like repeat visitors and session length, remain stronger than ever today,” Bridge Michigan’s growth strategist Bill Emkow wrote in a blogpost. “The Lab team worked with us to make our site and our newsletter more engaging. As tens of thousands of new loyalists return to us, a large portion are choosing to become paying members. Our revenue from these readers has kept pace with our significant audience spikes.”

Emkow credits its success to investing in culture change, acting on trends early, regularly testing assumptions and being consistent.

“Bill’s example shows what’s possible for local news organizations trying to improve their loyal audiences if they approach audience growth strategically, set a clear set of measurable objectives, and relentlessly deploy a set of accessible tactics to achieve them,” Ben Monnie, director of global partnerships solutions, news, Google, told Publishers Daily. “That was the goal of the GNI Audience Lab — bringing forward these lighthouse examples — and Bridge really created this inspirational story for us.”

Bridge Michigan’s editors and reporters used data to discern what the site’s readers wanted most. That, in turn, increased readership and return readers, who eventually become sustained members.

One tool that helped the site was a plug-in that reduced the size of images to increase load speed. The outlet also paid greater attention to SEO. By March 2020, Emkow wrote, the site counted more than 1.7 million Google Search referrals, surpassing its previous record by 870%.

Newsletters played an important part in the site’s growth, too.

In 2019, the site collected 13,000 new newsletter subscribers, but so far in 2020, it has added nearly three times as many. Emkow credits this growth to embedded email signup forms that vary in appearance across pages on the site and Facebook lead generation ads.

New and sustainable donations were also important to supporting site growth. Bridge Michigan created a host of opportunities across the site to inform readers about how they could contribute to the outlet as a donor or member.

“We hope Bridge Michigan’s results in the Lab and their ongoing growth in audience and reader revenue will inspire their peers in the industry to restructure their newsrooms’ organizational charts and workflows to hard-wire audience development and loyalty strategies,” Mary Walter-Brown, CEO of News Revenue Hub, said. “Newsrooms shouldn’t expect to see Bridge-like results without making Bridge-like commitments to audience.”

Monnie added many other participants also experienced success with the Lab, with the 15 participants increasing monthly active users by 121% on average, with a 30% average increase in newsletter subscribers compared to pre-lab levels.

The pandemic, which hit during the Lab’s run, provided a unique moment for recalibrating.

“When the pandemic hit, we wanted to accelerate our efforts to help participating organizations take quick action given that bandwidth and resources became even more scarce,” said Monnie. “We launched a sprint series, where each member got a chance to establish a concrete goal that worked for their business, and worked with us and News Revenue Hub weekly to reach those goals. The results were terrific and demonstrated that focused goal-driven projects can yield meaningful results.”

For example, the Daily Memphian grew newsletter sessions per user by 19%, compared to pre-Lab averages by implementing new A/B tests. The Cap Times hired a new team member to focus on audience growth. The Cap Times is set to launch a new newsletter as a result.

Now that the Lab has wrapped, the GNI and News Revenue Hub will make playbooks, workshops and a suite of services around audience development available to newsrooms.