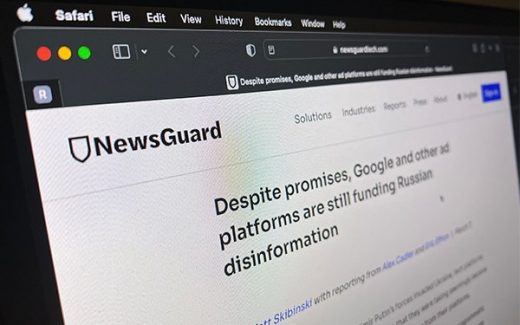 When the Russian military invaded Ukraine, Google and other tech platforms quickly denounced disinformation, followed by removing the ability to buy ads that serve up on sites in Russia.

New analysis by NewsGuard finds that brands continue to invest advertising dollars across dozens of websites that promote Russian disinformation about the Ukraine war.

These include websites that hide sources of funding, with many registered in countries such as Cyprus, or owned by business associates of Putin, according to NewsGuard.

The myths typically originate on Kremlin-owned sites and spread through a network of sites repeating the myths. Some also may have undisclosed links to the Russian government.

The articles, at the time of researching this data, served up below large Google advertising units stretching across the full width of the page.

The false claim that Ukraine’s government is controlled by Nazis appears to have originated from Russian state media sources in 2014, according to NewsGuard, with stories targeting the inner circle of former Ukrainian President Petro Poroshenko and the current president, Volodymyr Zelensky, who is Jewish. The alleged rise of anti-Semitism in Ukraine was among Russia’s justifications for an invasion of Ukraine.

NewsGuard points to a broader problem for the ad platform. Russia’s claim that the Ukrainian government is illegitimate and run by Nazis would certainly seem to violate Google’s Publisher Policies that state the company will not advertise on content that contains “unreliable and harmful claims,” including content that “makes claims that are demonstrably false and could significantly undermine participation or trust in an electoral or democratic process.”

The presence of programmatic ads on sites like Pravda and others identified by NewsGuard suggests that rules put in place to enforce them have not been effective or have not been implemented.

NewsGuard relies on nine basic, apolitical criteria of journalistic practice to rate news and information websites. It previously rated all these sites Red for being generally untrustworthy before the Russian invasion of Ukraine.