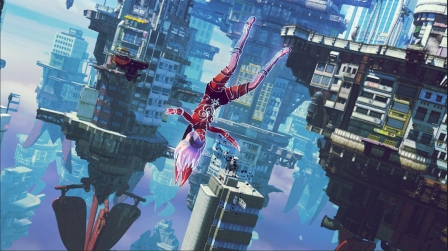 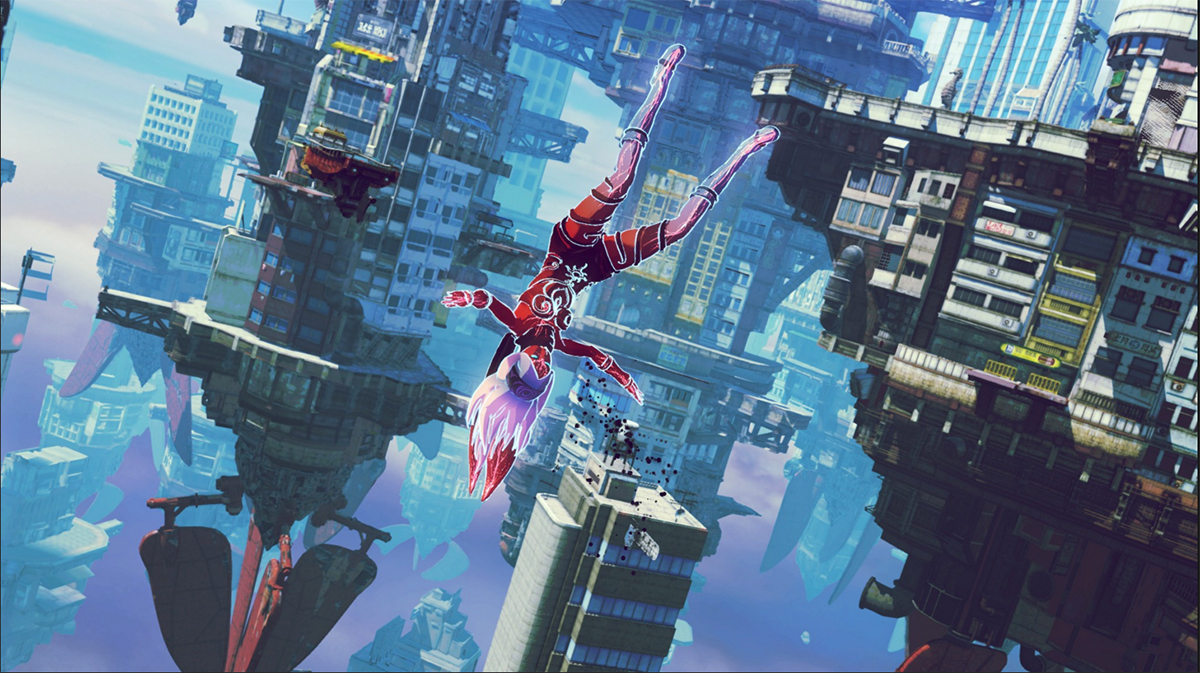 The original Gravity Rush was a key launch title for the PlayStation Vita — a (rare) original adventure that wasn’t a portable iteration of something that already existed. But when it came to the sequel, Sony’s Japan Studios wanted to bring it to home consoles and Gravity Rush 2 was announced alongside a PS4 remaster of the first game. I got to play the latest demo of the sequel here at the Tokyo Game Show, and it looks and feels like a bigger game in nearly every way — exactly what GR2 needs if it wants to stand out on Sony’s main console against stiff competition.

In Gravity Rush 2, you still play as Kat, wielding gravity-warping powers that let her tumble up, sideways and (boringly, realistically…) down. Combined with a surprisingly intuitive control scheme, you’re soon soaring around towns and locales, while the relatively simple fight system lets you fight back against invading inter-dimensional blobs of black stuff.

Said blobby aliens (with handy glowing red weak spots) are still around, with some sort of dimensional disaster occurring between the end of GR and the start of GR2. For not-fully-explained reasons, there are now a few powerful upstarts with powers of their own (self-healing brawlers, crystal-winged angels), as well as military forces with both giant mechs and high-tech battle suits built to go toe-to-toe with anyone with gravity powers. This already sounds like it will help alleviate some of the battle tedium that I felt when playing the original game — everyone likes a good boss battle.

It was even cooler when Raven — the gravity-powered antagonist from the first game — started fighting alongside me. She would often team up alongside Kat as I charged up my most powerful attack, ensuring I did more damage to the giant mech robot attacking us. Both fighting and exploration is made even more interesting by the introduction of two new gravity power styles: Jupiter (slow, hard-hitting) and Luna (light as a feather, but weedier in a fight).

Luna style was the most fun for me, at least during my short play-through. Kat skates along the ground as if it’s ice; she even can stand on water or thin branches. She can also leap pretty damn high without even needing to tap into her gravity mojo. Both styles add a change of pace mid-battle, and you can interchange between the new styles and your normal power-set by swiping up and down on the DualShock touchpad. By the way, slamming into the ground with the Jupiter style is so, very, very satisfying:

You can further augment abilities through a new talisman system (you’ll find them in side-quests as well as during the main campaign), which will let you boost and fine-tune your skills. You will be able to swap between talismans in-game, meaning you can equip yourself better for whatever particular task you’re trying to complete. Harder kicks, longer lasting powers, more things to magically throw with your gravity powers were all outlined during my briefing, but this is just scratching the surface. Combine this with the three power styles mentioned above, and Gravity Rush 2 looks like a deeper game — the kind that PS4 owners would expect.

As the sequel was built for the home console, it all looks predictably far gorgeous and grander than handheld-bound Gravity Rush. There’s a heavy stylistic tone to the series, but Sony’s console has the power to deliver the vision on a bigger scale; to add fluffy cloud surroundings to the skies, to fill street markets with a bunch of people without choking on the graphical fumes. Stand somewhere high, and you can see for (possibly) miles.

There’s a learning curve to both navigating the skies and nailing the black blobs with your kicks and gravity skills. New players will be introduced to Kat’s existing skill set gradually throughout the start of the game, but if you’ve played the first title on Vita, if not the PS4, you’ll be soaring and falling in no time. And to those that didn’t get what they wanted from the original story-wise, Director Toyama ensured the audience during a Q&A session that many of the game’s mysteries, including the origin of Kat, will be answered in the game. 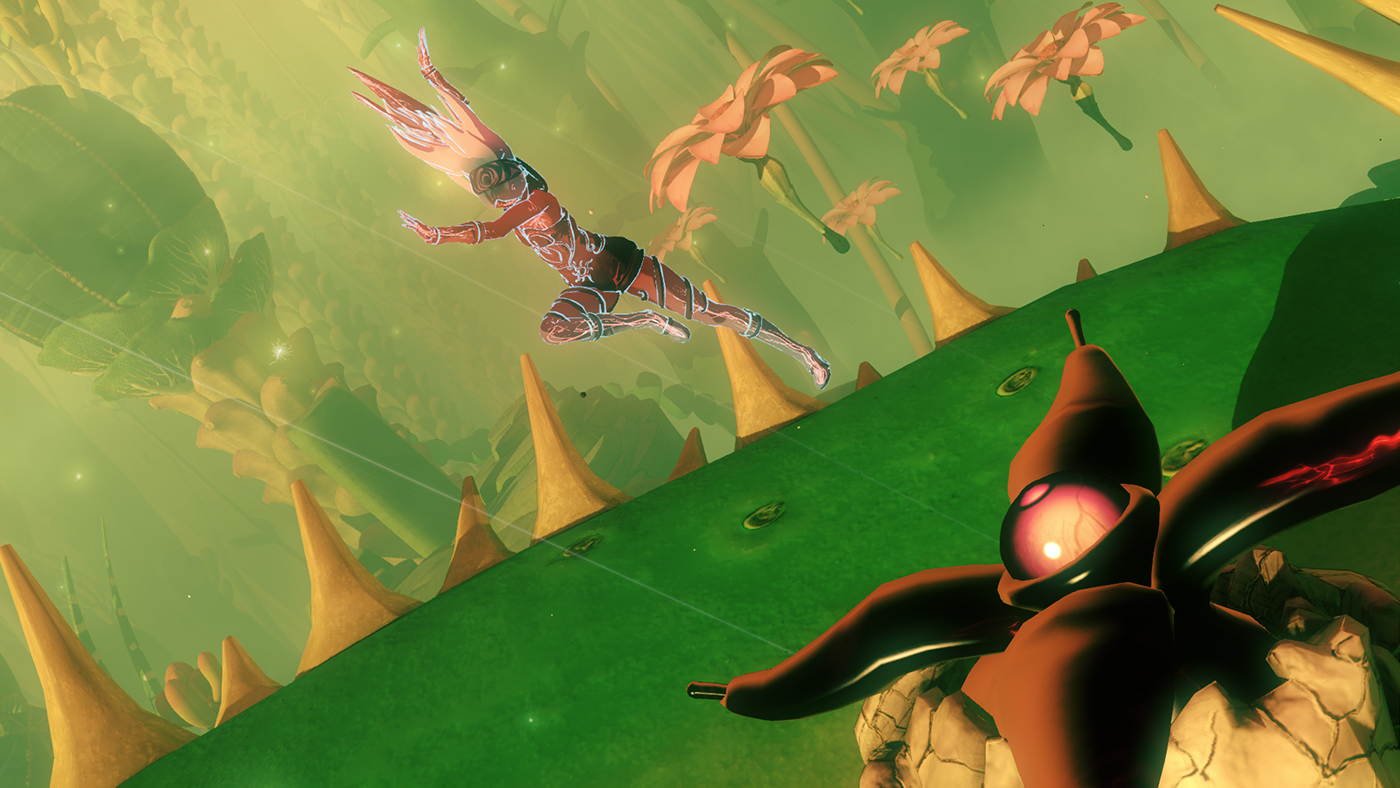 The in-game world will be at least twice, if not three times, as big as the original, with each region having a particular flavor, delivered through building and character design and through the soundtrack. The music is rich, big-budget orchestral pieces, while in-game characters are still talking in something nonsensical that sounds like a language from both North Europe and South America all at once. The attention paid to both audio and design was what helped make the original stand out, so while it’s nice to see the game take a slightly more exotic twist on design, it looks like Japan Studios have also given the sequel just as much attention, perhaps more. The demo I played showed a world that was busier than the original, and as I said before, just grander.

While more places to explore is great, there will still be extra missions and challenges to help you power up your character, with a new mining side-quest letting you challenge other players online. This challenge system existed in the first game, but the introduction of customizable talismans suggests canny item management could trump raw gaming skills. Inside the mining areas, you’ll also be able to find gems and upgrades, as well trinkets from players who died in that area. Which is a bit morbid. And if mining sounds a bit like glorified grinding for new powers and cash, Toyama insisted that it will not be necessary for finishing the game, but more like an extension for those who want to play more.

Gravity Rush 2 launches in the US and UK on December 2nd, and November 30th in the rest of Europe.

The original Gravity Rush was a key launch title for the PlayStation Vita &mdash; a (rare) original adventure that wasn’t a portable iteration of something that already existed. But when it came to the sequel, Sony’s Japan Studios wanted to bring it… Engadget RSS Feed