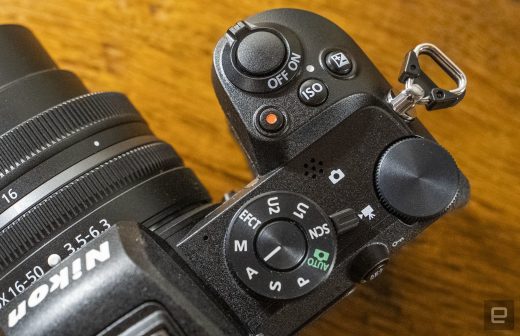 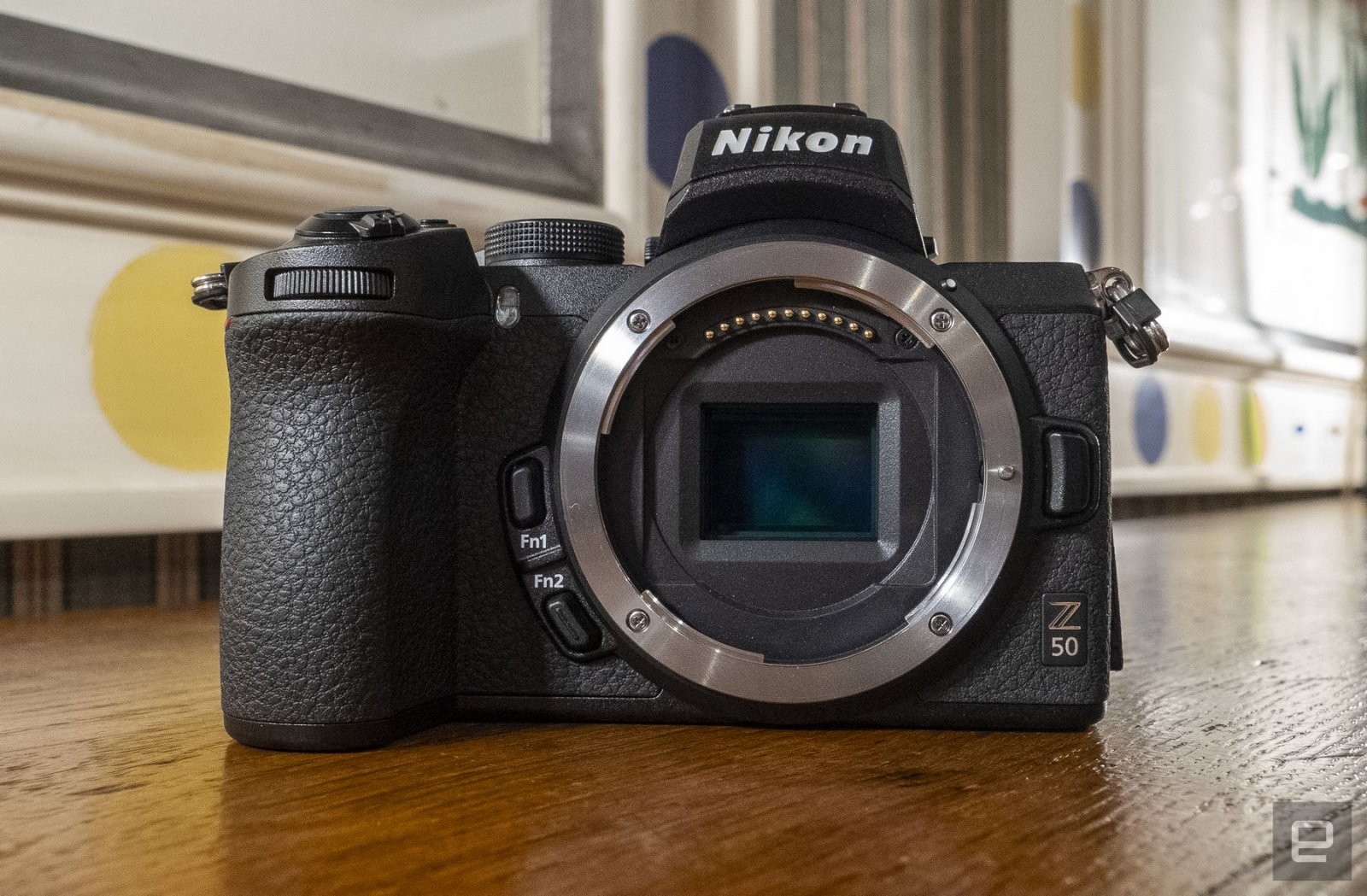 Nikon has unveiled its first-ever APS-C DX mirrorless camera, the 20.8-megapixel Z 50. That makes two different camera systems launched a year apart, which is quite a pace for a conservative company like Nikon. The Z 50 is less than half the price of the Z 6, so it should appeal to a broader market, especially folks who already own Nikon DSLR lenses.

Nikon now has both full-frame and crop sensor mirrorless systems, just like its rivals Canon and Sony. Just over a year ago, it essentially had zero, not counting the moribund Nikon 1. The company decided to follow Sony’s lead by using the same mount for both systems to allow for lens compatibility and because the large diameter allows it to build sharper glass, according to a Nikon spokesperson. Meanwhile, Canon uses two different mirrorless mounts (EOS R and M mount) that aren’t compatible with each other.

The body is also considerably more compact — tiny, even — next to the full-frame cameras, weighing just 14 ounces or 397 grams, compared to 675 grams for the Z 6. That will make it a better carrying-around camera for street photography, tourism and family events.

Nikon launched the Z 50 with two lenses, the first being the DX 50-250 f/4.5-6.3 VR zoom with a telephoto range of 375mm (35mm equivalent). The other is the compact Nikkor Z DX 16-50mm f/3.5-6.3 VR zoom. You can also use any of Nikon’s seven full-frame Z Mount lenses and hundreds of FX or DX DSLR lenses via Nikon’s $269 FTZ mount adapter. Note that for the latter, you’ll only get full electronic compatibility (exposure, iris and autofocus) with recent models.

To hit that weight and keep the price down, Nikon had to cut a few corners. As such, the Z 50 doesn’t have in-body stabilization (or “VR” vibration reduction, as Nikon calls it) like the Z 6/Z 7. The first two lenses for the system do have VR built-in, with five stops of shake reduction. That should let you shoot down to about 1/15th of a second without any blur.

The electronic viewfinder (EVF) is also limited to 2.6 million dots of resolution, compared to 3.5 million dots on the full-frame models. To be fair, Nikon’s similarly priced rivals, the Sony A6400, Fujifilm X-T30 and Canon EOS M6 Mark II, all have similar EVFs and lack in-body stabilization.

On the back, the Z 50 has a 3.2-inch, 1-million-dot touchscreen that can control just about every aspect of the camera, including the main and Q menus. It tilts out and 180 degrees downward, making it useful for selfies or vlogging. If you’re using a Joby-type tripod, selfie stick or hand-held stabilizer, however, you’ll end up blocking most of the screen.

Control-wise, the Z 50 is stripped down a bit compared to the Z 6 and has no joystick, but it does feature a control wheel, two top control dials, two function buttons and a main function dial. Overall, the ergonomics look good for such a small camera, with a nice mix of menu-driven and manual controls.

As for the battery, Nikon is using an all-new 1,120mAh type called the EN-EL25, and is promising 280 or 320 shots on a charge with and without the EVF, respectively. The single storage slot supports slower SDXC UHS I cards. That’s too bad considering that Canon’s new M6 Mark II supports UHS II, which delivers triple the speed.

On the performance front, Nikon says that the Z 50 can shoot bursts at up to 10 fps, both in mechanical and fully silent electronic shutter modes, which matches most of its rivals. Furthermore, it can hit those speeds with continuous AF and auto-exposure enabled.

It comes with a 207-point phase-detect autofocus system, complete with AI powered eye-detection. On the video side, the Z 50 can handle 4K video with a full sensor readout, just like Sony’s A6400 and the Fujifilm X-T30. Canon’s M6 Mark II also does 4K using the full width of the sensor, but it’s not clear whether it’s a full-sensor readout, or whether Canon does “pixel-binning.”

Those are the specs, but I also had a chance to use it for a bit at Nikon’s event. Despite the smaller size, the Z 50 means business thanks to that protruding grip. It’s almost comically large compared to the size of the camera and gives you a vice-like hold on it. I really liked the Z 6’s ergonomics, and the Z 50 is similar, albeit with fewer buttons and no joystick. So far, I’d rank its ergonomics as best in class, followed by the Canon M6 II, Fujifilm X-T30 and Sony’s A6400, in that order.

You will need to dive into the menus more often because of the lack of buttons, but Nikon’s menu system is better than what Sony and Canon offer, though a bit below Fujifilm. Thanks to the logical layout, I was able to find all the functions I needed and never got lost. You can also use the touch-operated function menu to do most common chores. You should be able to avoid using the full menu completely for the most part if you set up the manual controls the way you like. 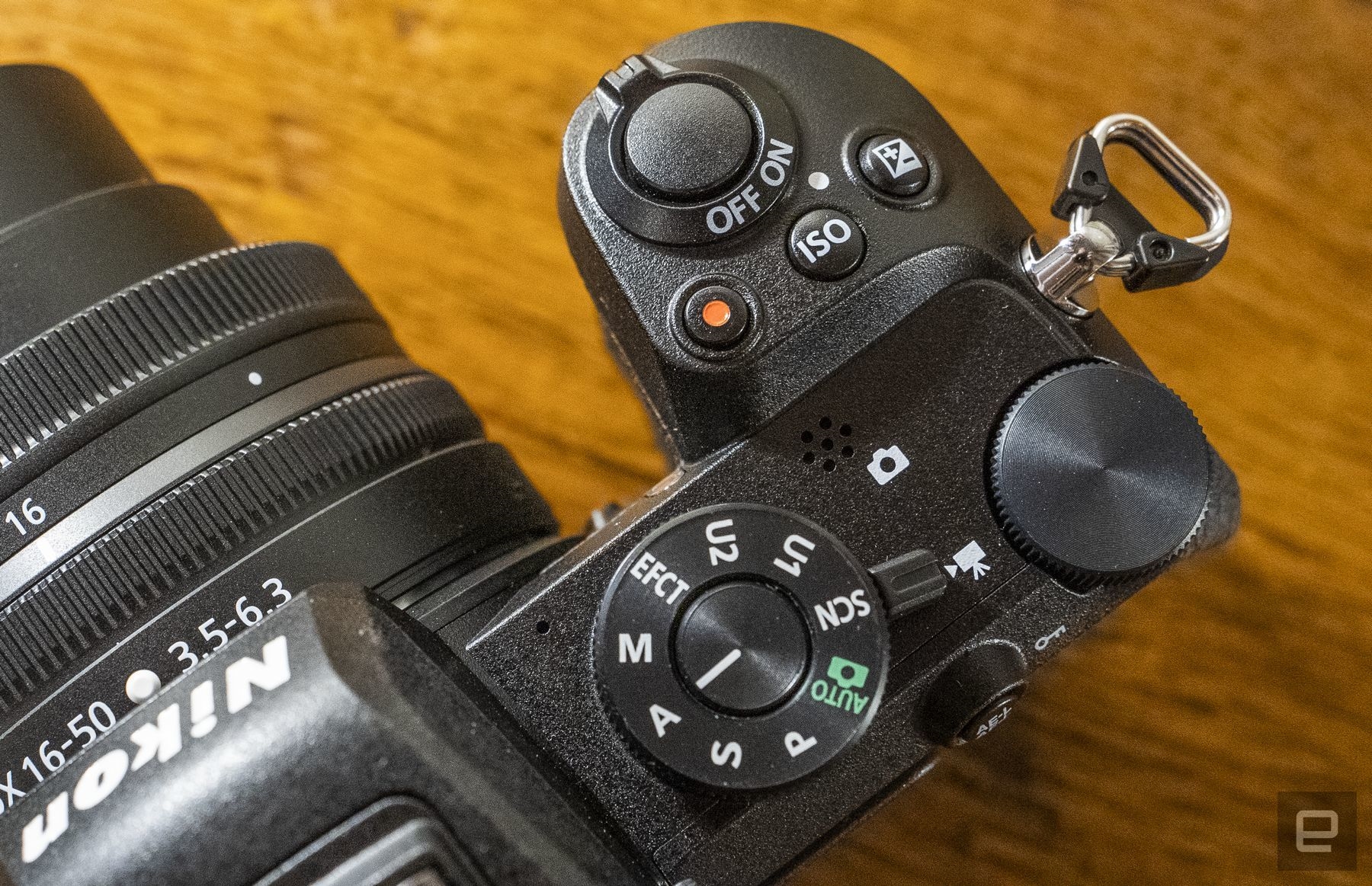 I was impressed with the burst speeds and autofocus performance. At full RAW and JPEG quality, I could fire off 10 fps bursts for nearly 40 shots before the buffer filled up. It only took a few seconds before I was ready to fire again, but to keep that time down, Nikon suggests you use a fast memory card.

While shooting those bursts, I changed from subject to subject to see if the autofocus could keep up. It did for the most part, but wasn’t as quick as Sony’s otherworldly AF system. The face and eye-detect system seemed nearly lag free, and kept up with subjects even when they turned around or momentarily went out of view.

During a quick test, I found that images yielded natural-looking colors. 4K, 30 fps video quality also looked good, with no signs of aliasing and crisp, accurate color reproduction. The Z 50 can handle 1080p at up to 120 fps, and even lets you record audio at that high framerate, unlike the Sony A6400. Unfortunately, Nikon didn’t let me keep any of the photos or videos I shot with the pre-production unit I tested, so I can’t share the results.

Meanwhile, the Z 50’s prices should appeal to serious amateurs, especially if they have some Nikon glass lying around. So far, I think the Z 50 holds its own against rivals, but we’ll have to reserve judgement until we can publish a full review.

While it shares the Z Mount with the full-frame Z 6 and Z 7 mirrorless cameras, the Z 50 has a 24x16mm DX sensor — though not the same 20.9-megapixel model used on Nikon’s flagship DX DSLR, the D500. That’s about a third smaller than the one on the full frame cameras and equivalent to a 1.5 times crop factor.