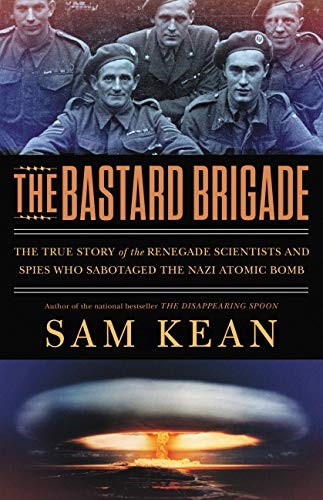 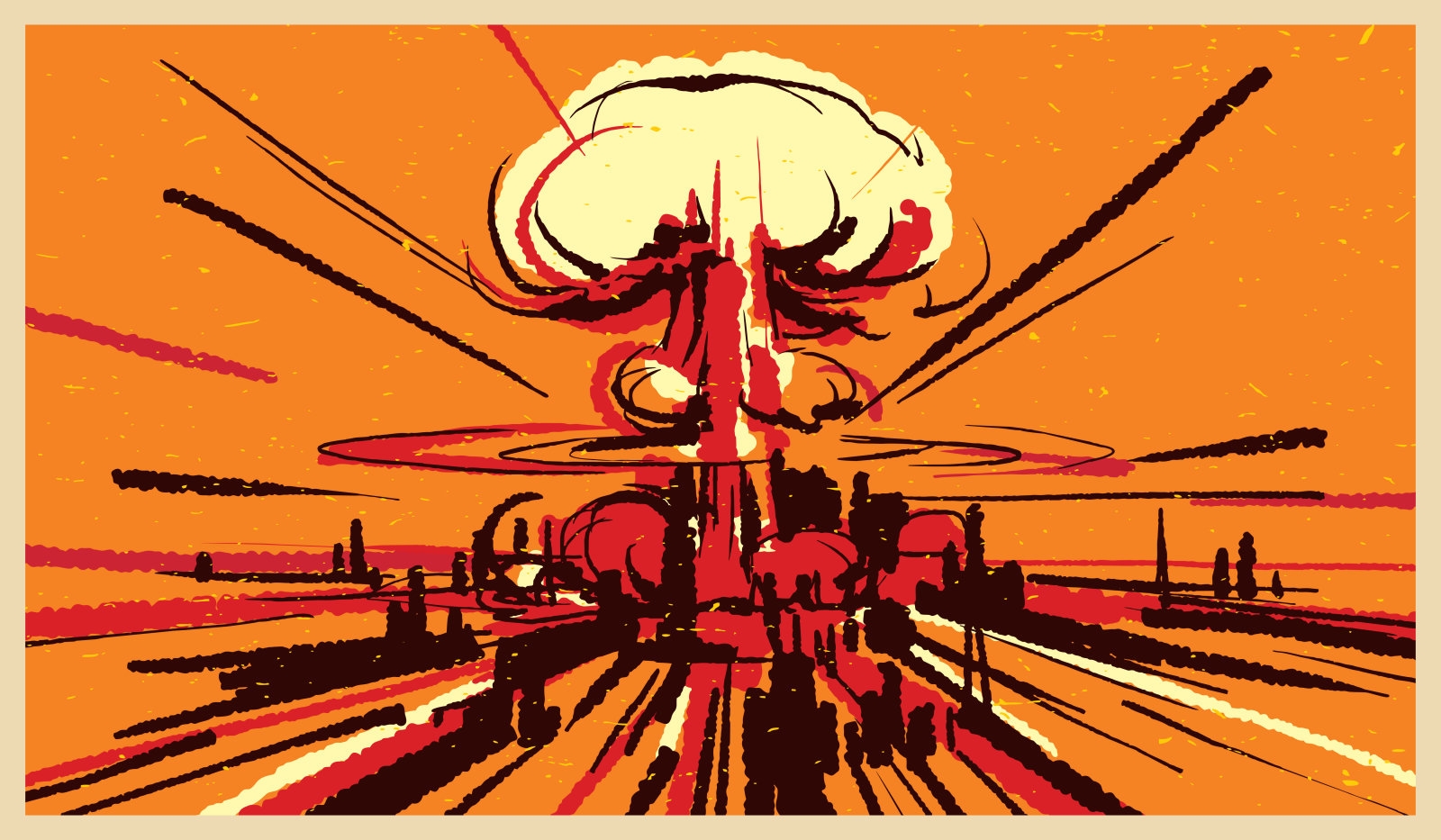 The Bastard Brigade: The True Story of the Renegade Scientists and Spies Who Sabotaged the Nazi Atomic Bomb
by Sam Kean

World War II could have ended disastrously for the Allies had the Axis powers managed a breakthrough in fission technology before they did. With every nation subjugated by the Nazi war machine, the fascist invaders gained more resources, more production facilities and more technological prowess thanks to their conscription of Europe’s leading nuclear researchers.

But their efforts did not go unopposed. From saboteur scientists working for the Resistance to a ramshackle array of US and Allied military officers, an ex-MLB catcher-turned-spy — heck, there are even a couple of Kennedy’s in there — Bastard Brigade tells the harrowing tale of our fight to keep The Bomb out of Hitler’s hands.

In the excerpt below, author Sam Kean revisits the desperate days of late 1943. The Nazi propaganda was relentless and researchers with the Manhattan Project were in a state of panic, convinced that Hitler had a nuclear-tipped V-3 ready with America’s name on it. Paranoia grew so intense that the US military deployed a crack unit of nuclear inspectors with orders to scour Europe for evidence of a Nazi atomic bomb.

After fleeing Denmark, Niels Bohr sailed to the United States to advise on the Manhattan Project, and he proved just as much of a security nightmare in America as he had in Europe. He first visited New York, a dangerous city for an oblivious jaywalker like him; more than once he almost got creamed crossing the street. Then, on a cross-country train ride to New Mexico, he kept blowing his cover by forgetting his code name (Nicholas Baker), and an armed guard had to sleep outside his room at night to keep him from wandering off. Worst of all, he blabbed about fission research to anyone who’d listen. Things got so bad that General Leslie Groves had to drop everything he was doing to join Bohr for the last leg of the trip, which he spent lecturing the physicist — “for twelve straight hours,” Groves recalled — about the need for discretion. Bohr instantly saw the wisdom in this and promised not to say another unauthorized word to anyone. He even succeeded in keeping his vow for a good five minutes after arriving in Los Alamos. But as soon as Bohr saw his old colleagues, at a reception in his honor, he started babbling again — spilling every secret Groves had just warned him to keep mum about. The man was simply incapable of keeping his trap shut.

Although the Great Dane proved a valuable mentor at Los Alamos — at fifty-nine, he was the eldest scientist at the lab, thirty years older than the average — the immediate result of his trip was to heighten the paranoia about the Nazi atomic bomb, especially for Groves. Groves was not a hysterical man by nature, but as one of his staff noted, “He worried the hell out of the German bomb project during the war.” Bohr’s account of his conversation with Heisenberg in 1941 only deepened the general’s unease. He also rehashed the Heisenberg Sturm und Drang for Oppenheimer and other top officials at Los Alamos; this included pulling out the sketch Heisenberg had made, which caused quite a stir. To be sure, everyone concluded that it looked more like a nuclear reactor than a bomb, but the sketch was two years old at that point; Germany had no doubt made great progress since. And if nothing else, you could use reactors to breed plutonium.

Or worse. In addition to plutonium, running a reactor created all sorts of nasty by-products that were ideal for so-called dirty bombs. Although dirty bombs also require radioactive material, they differ from fission bombs in important ways. Fission bombs kill by releasing gobs of energy all at once; they vaporize you. Dirty bombs kill by releasing deadly isotopes that wriggle inside your body; they poison you. And while fission bombs require a nuclear explosion, dirty bombs don’t. You simply have to spread the dirty radioactive material around, which you can do with regular explosives; you can even mix the material with smoke or powder and use crop dusters to spray it on troops or cities.

As of 1943 there was no hard evidence that Germany was making dirty bombs, but the very idea of them contaminated the minds of Manhattan Project scientists, filling them with lurid visions. In the summer of 1943, project officials installed secret nuclear-defense systems in Boston, Chicago, New York, San Francisco, and Washington, with Geiger counters wired to air-raid sirens in case of attack with radioactive species. There was talk of preemptive strikes as well.

Enrico Fermi pulled Robert Oppenheimer aside one day and suggested manufacturing deadly strontium-90 to poison food and water supplies in Germany. Oppenheimer met this horrifying suggestion with enthusiasm, and abandoned it only after determining that they probably couldn’t kill enough people to make it worthwhile. He wanted at least half a million dead Germans, or why bother?

The paranoia reached its peak, or nadir, in late 1943. Based on projections about the rate of German research, several scientists convinced themselves that the Nazis probably had enough radioactive material by then to make several dirty bombs. Nazi propaganda minister Joseph Goebbels then ratcheted up the tension by declaring that Germany would soon unleash a revolutionary “uranium torpedo” on the Allies. The only question was when, and for various reasons American fears began to coalesce around dates in December. For one thing, security always slackened during the holiday season. For another, Hitler clearly loved stagecraft and grand gestures — witness the Berlin Olympics and his stormtroopers goose-stepping through Paris. He would certainly plan the attack to maximize its emotional impact. And what day could be more devastating than Christmas or New Year’s Eve? Their imaginations now at full gallop, a few American nuclear scientists actually sent their families to hideouts in the countryside in late December to protect them. They then endured a grim holiday week alone by the phone, their stomachs churning with acid, awaiting news of the atomic apocalypse.

Nothing like that happened, obviously, but the hysteria once again highlighted the fact that Manhattan Project leaders had no idea what German scientists were really up to. At the time, the United States
had pathetic intelligence capabilities, and there were no espionage units with scientific expertise, which meant they were probably overlooking vital clues. (The vast majority of people, for example, still considered uranium a useless metal.) And the problem would only get worse over the next year. By late 1943 the Allies had gained footholds in Italy and were planning to attack occupied France in 1944. Every newly conquered city meant new chances to gain precious atomic intelligence — or alternatively, to let it slip away.

To fix this problem, one of Groves’s deputies came up with a plan. Rather than rely on third-hand rumors from abroad, he decided the Manhattan Project should build its own intelligence unit to scour Europe. It would consist of both scientists and soldiers, and they would spend their days infiltrating labs, deciphering secret documents, and interrogating captured scientists. This was something new in the history of warfare: no one had ever turned scientists loose like this on an espionage spree. The team would report directly to Groves and would operate in strict secrecy, allowing no one in the field to know what they were searching for. The closer they could get to the front lines, the better.

The program became known as the Alsos mission, a name based on a multilingual pun: a ´ ?s?? means “grove” in Greek. But when the object of the pun, Groves himself, discovered this Easter egg, he was furious. He didn’t find it cute, and furthermore considered it a security hazard, since anyone who knew his role on the Manhattan Project could then infer what this scientific outfit was doing in Europe.

(There’s evidence, in fact, that a few British agents did deduce the purpose of Alsos based solely on the name.) No one in Groves’s office ever confessed to this etymological crime, and by the time Groves found out about it, the name had already started circulating within the Pentagon. Changing it would only draw more attention, so he grudgingly let it stand.

Groves eventually widened the scope of Alsos beyond nuclear science, figuring that as long as people were ransacking German labs, they might as well learn all they could about radar, rockets, jet engines, and biological weapons, too. But in large part, these other topics served as a beard, a way to obscure the mission’s real goal: hunting down secrets about the Nazi nuclear bomb. Alsos also had the authority to seize atomic matériel like uranium and heavy water, and even scientists themselves. As the mission evolved, in fact, manhunts became its top priority. All the uranium on earth wouldn’t do much good without a Hahn or a Heisenberg to sculpt it into weapons. Given their hostility to Groves, the British hated Alsos. The existing intelligence apparatus worked just fine, they insisted; there was no need to deploy a bunch of skittish scientists to the front, especially when they ran a high risk of being captured and interrogated, no doubt “in the Russian manner.” Groves cared not a whit for what the British thought, but he shared their concern on this last point. Therefore none of the scientists who worked on the Manhattan Project were eligible for Alsos — they simply knew too many secrets.

Ruling out everyone on the Manhattan Project, however, left very few candidates for the role of chief scientific officer on Alsos. Ideally, Groves wanted a nuclear physicist with some experience studying neutrons and cyclotrons. He couldn’t be a theoretical egghead, though: the job would be as much detective work as anything. Given the dangers involved, he would have to be pretty eager to do something for the war effort, and knowledge of Europe and its languages would be a nice bonus. But where on earth would they find somebody like that?

Luckily, the selection of chief military officer went more smoothly. Groves already had a candidate in mind, in fact, a former science teacher with experience in irregular warfare — someone just as obsessed as he was with security and someone who needed to get transferred out of his current post before he enraged every general in the army. Boris Theodore Pash.

Excerpted from the book THE BASTARD BRIGADE: THE TRUE STORY OF THE RENEGADE SCIENTISTS AND SPIES WHO SABOTAGED THE NAZI ATOMIC BOMB by Sam Kean. Copyright © 2019 by Sam Kean. Reprinted with permission of Little, Brown and Company. All rights reserved.