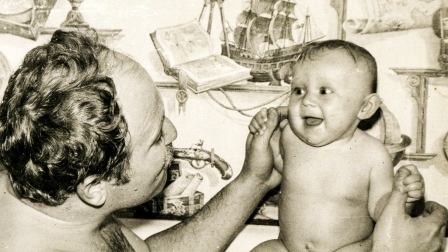 “We will achieve gender equality when we value caregiving as much as breadwinning. When we expect both men and women to be equally competent and equally responsible for caregiving and breadwinning,” asserts Anne-Marie Slaughter.

“The whole superwoman thing is that she can bring home the bacon and fry it up in a pan. Well, so can men.”

Slaughter is the president of the nonpartisan think tank New America Foundation and author of the book Unfinished Business, much of which focuses on the need to value all elements of care-based work for both men and women. This, she says is the missing key to reaching gender equality.

The Impact Of Equal Expectations

“It’s about work that invests in others,” she says, and that encompasses a variety of professions including teachers, therapists, coaches, as well as the unpaid work of being what she refers to as being the “lead parent.”

“That work is as important as the work that brings us money and power,” Slaughter says. “We expect women and men to be breadwinners. We now have to equally expect men and women to be caregivers.”

“We expect women and men to be breadwinners. We now have to equally expect men and women to be caregivers.”

Valuing this dimension of work would not only be a boost to the careers of individual men and women, but it could be a boost to the economy as well, says Slaughter. How? The high cost of childcare often pulls women out of the workforce, and fewer women in the workforce means we don’t benefit from our full talent pool (and it’s been proven that companies with diverse staffs and women in leadership positions do better).

Paid Leave And The Cost Of Childcare

Slaughter points to the cost of childcare as a major element that’s holding back the economic progress of the U.S. “If we had the same sort of care policies that other countries do, [it would] increase recruiting and retention of employees. From a public-policy point of view, whether you are thinking about national security or prosperity, equally investing in those first five years [of a child’s life] is the most important thing our society can do.”

She praises Hillary Clinton’s recent statement on the campaign trail that childcare shouldn’t cost more than 10% of a family’s income (for many parents it’s presently as much as 30% of their take-home pay, on average more than rent and more than the cost of public college tuition). As for the feasibility of such a change, Slaughter uses the shift in public sentiment about paid leave as a hopeful benchmark.

“We are seeing a growing wave of cities and states adopting paid family leave, which is something people said wasn’t possible for a long time,” she says. She mentions that 10 cities currently have paid leave proposals on the ballot, and several others—including New York, Washington D.C., Cincinnati, and San Francisco—all recently announced paid leave programs.

This is one place where Slaughter says we have the potential to lead the world. “Because we are coming to this so late, we don’t have the problem of having something that’s just for women that we then have to expand to men, or have something that covers children that we then have to expand to elders,” she explains. “Instead we can just go for family leave. And with the growing number of same-sex couples and families constructed in many different ways, that’s going to lead us again to realize that we need social insurance and government policies that help Americans care for each other in any combination they choose.”

But even if the U.S. does change its policies in favor of subsidized childcare and paid leave, a much larger culture shift around “caring” work needs to take place within companies and homes in order to achieve gender equality, says Slaughter. For example, studies have shown that even when men have paternity leave, they often don’t take it for fear that it will damage their careers. And they’re right to worry; for decades working mothers have found themselves “mommy tracked,” with fewer opportunities for promotions and raises after they become parents.

“Men are still seen as providers, women are seen as caregivers who also work.”

According to Slaughter, this goes back the view of traditional gender roles. “Men are still seen as providers, women are seen as caregivers who also work. Employers need to approach all employees as providers of both care and cash.” Again, she asserts it’s in companies’ best interests to attract and retain employees to shift their thinking, pointing out that many millennial men are becoming more vocal about wanting to work for companies that allow them to make room for family in their lives.

“The men who are [speaking up and taking leave] are the same kind of gender pioneers that the women of the early 1970s were,” she says. “A man who can put a meal on the table and put the kids to bed and organize a playdate—I see them as equally as competent as we expect women to be. The whole superwoman thing is that she can bring home the bacon and fry it up in a pan. Well, so can men.”

Slaughter admits that changing the way we view the work and value of care will take a culture shift at home as well. First in the way couples deal with the second shift of housework and childcare (women still do the lion’s share, clocking twice as much time on childcare and significantly more time on housework), but also in the way we raise the next generation of men. “Talk to your sons just as you would talk to your daughters about how they are going to have to combine their professional and personal goals,” she advises.

“Men are prisoners of constructed gender rolls just like women are.”

See how paid leave benefits everyone